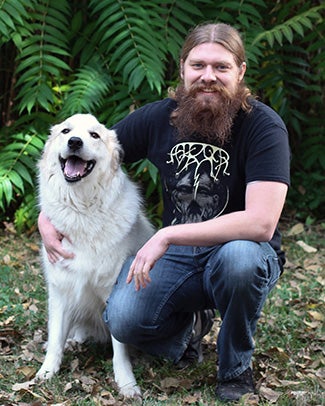 Tyler Rollins got his master’s degree in sociology at a school that, as he puts it, “has a reputation for being a somewhat radical campus.” Environmental activists sometimes slept in tree canopies to deter loggers. Others drove metal spikes into trees, ensuring any trespassing chainsaws would snap.  The sociology department placed a big emphasis on social movements and their organization.

But “one of the things I always found lacking,” Rollins remembers, “was an understanding of the role the media played in these social movements.”

That type of understanding—the ability to think about and analyze the role and the impact of the media in society—is just what CMCI’s Department of Media Studies offers, both at the undergraduate and graduate levels.

Rollins came to CU as a doctoral student. His research focuses on American domestic surveillance projects between the end of World War II and 1975. Unknown to most Americans, U.S. intelligence agencies during this time intercepted and read the mail and telegrams of many citizens. Rollins uses historical and legal techniques to discover how these covert, questionably legal projects were operated, justified and criticized at the time.

Ultimately, he hopes that his work will help Americans grapple with recent revelations that the National Security Agency continues to collect the personal information of many American citizens. “If you can understand what was truly going on in the past and then compare that to our present issues, it gives you a new perspective,” he explains.