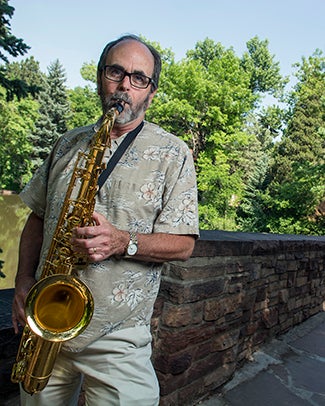 When Mardi Gras rolls around, Paul Voakes grabs his tenor saxophone and joins a party band. His horn brings a New Orleans vibe to the music. Musical performance is a new experience for him. He’s a longtime fan of the saxophone—especially in jazz—but just started lessons two years ago. “It’s a struggle,” he admits, “but I need to be a student of something all the time in my life.”

Just as learning and improvisation are key to Voakes’ jazz, they are key to his journalism. As a reporter and editor for the San Jose Mercury News in the 1980s, he often followed new information in different directions in his stories. Like jazz, it was a bit of a performance, with tight deadlines and an audience of hundreds of thousands.

As a child, Voakes loved being the first person to learn something new and tell others about it. As a college freshman, he planned to become an actor, but his curiosity and knack for writing drew him to journalism.

Next, as a professor, he remained a student, eagerly adopting the industry’s new tools while applying journalism fundamentals such as accuracy and ethics to new media platforms.

In a recent ethics class, for instance, he explained the rules of publishing people’s pictures. His students brought up the case of a college football player who sued a video game manufacturer for using his image without permission.  The students’ debate over whether athletes should be paid when their images are used was Voakes’ favorite discussion of the semester.

“The great thing about teaching is that I get to work with intelligent, young, media-savvy people,” he says. “I’m never sure what direction any class will take us. Quite often my students end up teaching me as much as I teach them.”