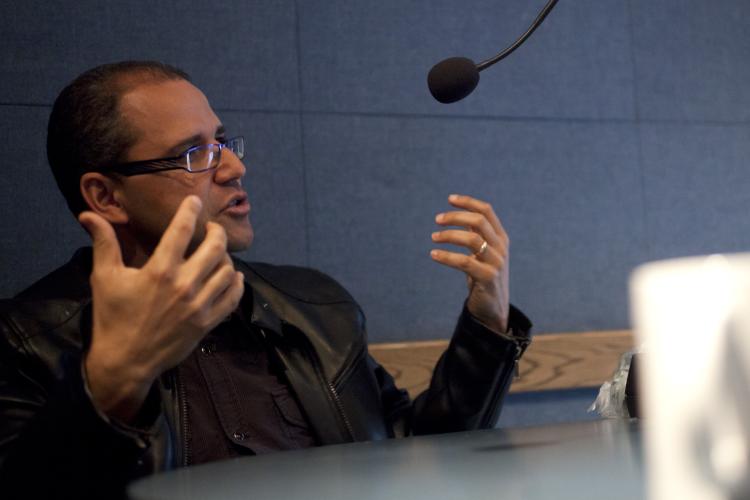 For Nabil Echchaibi, the media have always been more than a source of information or amusement.

As a child, he used books and films to explore the world beyond his home in Morocco. As a graduate student, he studied how Arabs used radio to share the difficulties of living in foreign cultures. And as a professor, he examines many types of media to understand how Muslims shape their identities in a modern and sometimes hostile world.

“The media are ubiquitous,” he explains. “We all use these technologies, but we don’t really pause to think about what these things are doing to us, and what we can actually do to harness the power of these technologies for better causes.”

That focus on thinking about media and its impacts is at the heart of what Echchaibi and his colleagues in the Department of Media Studies do. While Echchaibi focuses on Muslim culture, other faculty members look at how media can strengthen democracy, or how media influence the way people view race, gender and sexuality.

One of three children from a middle-class Moroccan family, Echchaibi describes himself as a “cultural rebel.” He came to the United States on a graduate scholarship and by 2001 was thinking about his career.

The attacks of Sept. 11, 2001 determined that course. In the days after the attacks, mentions of his Moroccan heritage were often followed by critical questions about religious extremism. Realizing the questions that now surrounded his religion, he turned his focus to what it means to be Muslim and modern.

“We live in a world where people are moved through vigorous discourse.”

His research covers many geographic areas and media formats. While studying televangelists in Egypt, for instance, he found that the Islamic tradition of sermonizing is well suited to television and the Internet. In Colorado he teamed up with historians, filmmakers and journalists to chronicle the history of Muslims in the mountain states.

Echchaibi writes often for international and national publications, including The Guardian in the United Kingdom andThe Huffington Post. As experts on the media’s impact, he says, he and his colleagues have an obligation to inform public discussion.

“Media studies allow you to see things beyond what they appear to be on the surface,” he explains. “The research I’m doing, hopefully and humbly, allows me to reveal something about a certain world that normally gets reduced to a caricature. I want people to see things differently.”