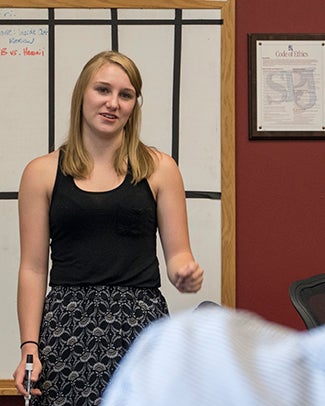 Class of 2017 • Co-Editor-in-Chief of CU Independent

Jordyn Siemens sat nervously on an old, green couch in a crowded newsroom. Only three days earlier, she had moved from her family’s home in Fort Collins into her freshman dorm.

At a friend’s insistence, she had agreed to attend the first staff meeting of the semester for the CU Independent (CUI)—a 24/7 student-run news site.

Journalism wasn’t new to Siemens. She had learned to edit video in high school and had come to CU-Boulder to study broadcast news. But she had never written for a news publication. If she was going to be a journalist that needed to change, she decided.

“My very first assignment was a cross-country meet and my story didn’t get put up because it was so bad,” she remembers with a laugh. With coaching from her editors, her fourth story—a profile of a cross-country runner—went up on the site. “I was really impressed with all the older kids who took me under their wing and showed me what to do,’’ she says.

Now, Siemens leads staff meetings from the front of that newsroom.

As CUI’s co-editor-in-chief she heads a staff of writers, photographers, audiovisual producers and programmers who publish an award-winning news site. Siemens and the other editors encourage staff members to pick assignments and media formats that interest them. Students from the campus sports show produce a podcast, a student from the business school sells ads, and computer science students maintain the website.

“The resources are endless. I can try any and every idea that pops into my head.”

In her CMCI classes, Siemens focuses on broadcast news, gaining hands-on experience with video editing, studio production and field videography. She also develops public exhibits for the library and writes online content for the athletics department. In each of these experiences, Siemens sees potential journalism careers. “That’s how this journalism department is set up,” she notes. “You may major in one area, but you dabble in everything.”

As Siemens continues to explore her future, the CUI offers a chance to build her leadership skills, to add to her professional portfolio and—as it has for many previous students—ultimately pave her way into the media industry. And as co-editor-in-chief, she aims to ensure that other students have the same opportunities. “Students here take on projects. When they leave, they can say ‘I started this column, this video series, this podcast,’ ’’ she explains. “It’s an entrepreneurial experience.”