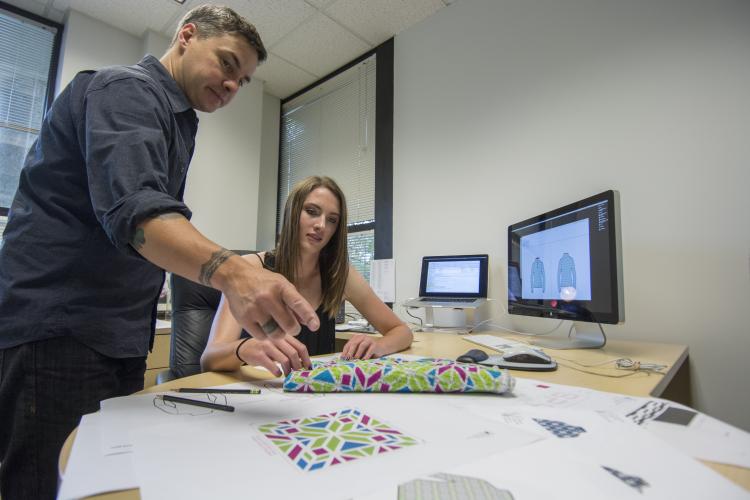 Caitlyn Hubbard’s favorite color is yellow. As a child, she had a bright yellow winter jacket with an odd-looking spider logo on it. “Who has a bug on a ski jacket?” she wondered.

Years later, the spider reappeared on a business card someone handed her. That’s how she was introduced to Spyder Active Sports—an outdoor apparel company headquartered in Boulder, and the official supplier of the U.S. ski team.

As Hubbard entered her senior year as a communication major at CU-Boulder, she had both an internship and part-time job at Spyder. She thrived in the company’s fast-paced environment, corresponding with international suppliers and keeping ahead of seasonal trends in fashion. Her major complemented the work, giving her new insight into the company’s operation. “I saw how valuable communication was within the company and I know my degree will be a huge asset to my career.”

After the internship, she knew she wanted to pursue a career at Spyder. “Interning and working while attending CU-Boulder helped me discover what kind of career I want to have long-term,” she says.

Hubbard wasn’t always so sure of her future plans. She entered CU as a pre-med major. But she quickly found she didn’t enjoy her classes and began to wonder if she really wanted a doctor’s lifestyle. “I needed a break to figure it all out,” she recalls. So she took a year off from school to work and get a new perspective.

It was during her year off that Hubbard received the arachnid-adorned business card and found a job she enjoyed at Spyder. Drawn to the fast pace of the apparel industry, she quickly realized that effective communication was essential in such an environment. So when she returned to CU, Hubbard switched her major to communication, with its focus on interactions between people and within organizations. She also continued to work part-time at Spyder.

In class, Hubbard’s professors asked her to examine communication within the company. She noticed how different groups within the company communicated in different ways. She came to understand how managers used fun rituals—like a snow dance—to build a substantial company culture. “It opened my eyes to a lot about the company that I don’t think I would have realized otherwise,” she says.

After graduation, Hubbard heard the news she was hoping for: she got the job at Spyder. She now works as a product developer at Spyder on a range of clothing lines. And communication continues to be crucial to her work. “It can really help or hinder working relationships.”