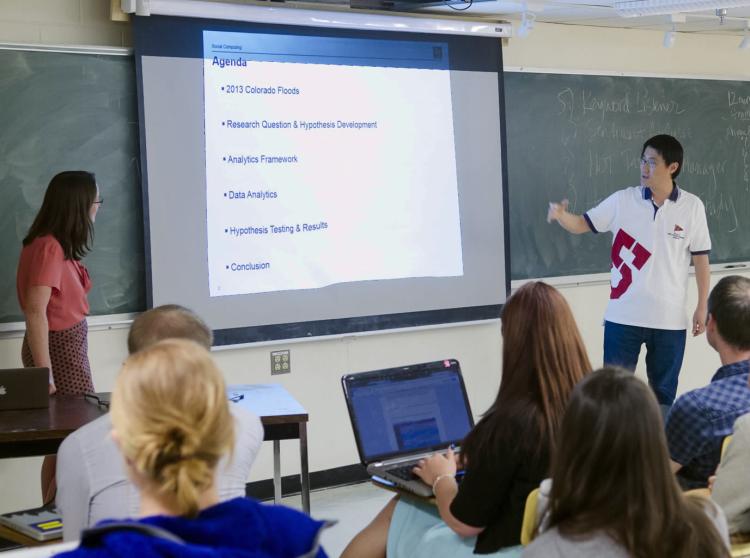 Tweets sent during last year’s massive flooding on Colorado’s Front Range were able to detail the scope of damage to the area’s infrastructure, according to a study by the University of Colorado Boulder.

The findings can help geotechnical and structural engineers more effectively direct their reconnaissance efforts after future natural disasters—including earthquakes, tsunamis and tornadoes—as well as provide them data that might otherwise be lost due to rapid cleanup efforts.

“Because the flooding was widespread, it impacted many canyons and closed off access to communities for a long duration, making it difficult to get a reconnaissance team on the ground,” said Shideh Dashti, an assistant professor of civil, environmental and architectural engineering at CU-Boulder and an author of the paper. “The continued storms also prevented airborne reconnaissance. As a result, social media and other remote sources of information were used to obtain reconnaissance information.

“People were tweeting amazing pictures and videos of damage to bridges and other infrastructure systems,” Dashti said. “After the fact, we compared those tweets to the damage reported by engineering reconnaissance teams and they were well correlated.”

During the second week of September 2013, the Front Range was deluged with as much as 17 inches of rain, causing extensive flooding that destroyed roads, swept away houses and washed out bridges.

After a disaster like last year’s floods, it’s important for geotechnical and structural engineers to collect data about how well infrastructure withstood the extreme event, in order to prevent damage in future similar disasters. Structures are designed to survive a certain amount of stress, but those built-in safety margins are based on mathematical formulas that attempt to describe the real world. Detailed information about what actually happens on the ground during disasters allows engineers to tweak the mathematical formulas and build more resilient infrastructure in the future.

But engineering reconnaissance teams often find there is only a narrow window—between when it becomes safe to enter an area and when cleanup efforts begin to erase evidence of infrastructure performance—for investigation.

By collecting and analyzing the information contained in tweets, engineering reconnaissance teams can quickly determine the scope of the geographic area where infrastructure has been damaged, decide where best to focus their limited time as well as glean valuable information about infrastructure they are unable to see in person, Dashti said.

The team used Twitter data collected by Project EPIC (Empowering the Public with Information in Crisis)—a program launched by Palen and Kenneth Anderson in 2009 to study social media use during disasters. Project EPIC is supported by the National Science Foundation and is based in CU-Boulder’s College of Engineering and Applied Science.

“Project EPIC recorded tweets during the floods,” Dashti said. “We provided the EPIC team with keywords that are relevant to disaster reconnaissance and infrastructure performance, which allowed us to filter the tweets to a manageable number for further analysis.”

Tweets that were tagged with latitude and longitude could immediately be mapped. While only a small percentage of tweets—about 1.2 percent—had “geo-tagging” turned on, they were still adequate to provide substantial information on the geographic distribution and time progression of damage, said Dashti, who compared a map of damages created by the city of Boulder with the map of geo-tagged tweets.

Many tweets that were not geo-tagged still had value, Dashti said, because they mentioned specific places or were linked to pictures or videos with recognizable landmarks.

The new study is one of the first to look at how social media can be used to support reconnaissance by non-emergency professionals, like engineers, after a disaster. Much of the prior research in information systems for crisis response is focused on supporting emergency responders and residents while extreme events are happening.

In the future, Dashti hopes to create a platform that combines information gleaned from social media with other information that citizens can self-report, perhaps through a smartphone application.

“My goal is to eventually feed information on damage distribution back to the user,” Dashti said. “You provide information and as a result, you gain access to live, mapped information provided by other users during a disaster.”