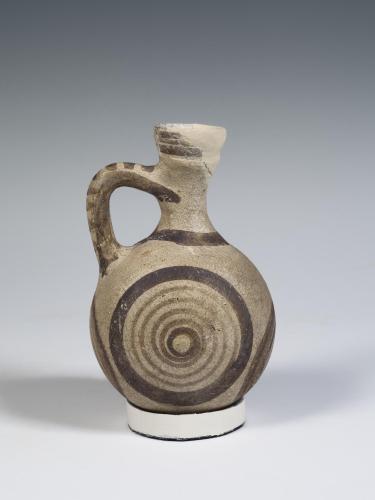 The island of Cyprus is located in the eastern Mediterranean Sea, south of Turkey, west of Syria and Lebanon, and southest of Greece, ideally located to become a major link between the Aegean and the Near East. A history of extensive trade contact and numerous immigrations of foreigners resulted in a local culture which bore many signs of foreign influence.

The earliest evidence for human activity on Cyprus dates back to the Neolithic period, when seasonal hunters visited the island to hunt pygmy elephants and pygmy hippopotami. The first significant contact with foreign cultures came during the Early Bronze Age (2,600-2,000 B.C.E.), with a wave of new immigrants to the island. Some types of pottery from this period, specifically Red Polished Ware, resembles Anatolian wares, a similarity that has led to the theory that immigrants from Anatolia (modern Turkey) were the impetus for Early Bronze Age culture on Cyprus. These newcomers are also thought to have introduced more advanced metallurgical practices, which allowed for the manufacture of objects of copper and its alloy, bronze (1). The island was famous in antiquity for its abundant copper resources.

Other artifacts dating from this period attest to the presence of trade contacts with Crete and possibly Egypt (2).

Trade contacts continued to grow throughout the Middle Bronze Age (2,000-1,600 B.C.E.) and into the Late Bronze Age (1,600-1,050 B.C.E.). This increase in trade spurred the development of a writing system for administrative and recordkeeping purposes and thus led to the emergence of what has been labeled by some scholars as a Cypro-Minoan script. Cypro-Minoan is labeled as such because scholars have compared it to the Linear A script of Crete, home to the contemporary Minoan civilization. This view is not universally supported and other evidence indicates Near Eastern influences on Cypriot culture, as well (3).

Around 1,400 B.C.E., Mycenaean Greek merchants, attracted by the potential for trade with the Near East, began immigrating to Cyprus. With them they brought Mycenaean pottery, which introduced a plethora of new decoration schemes to Cyprus, including the Mycenaean pictorial style, a famous example of which is the Mycenaean Warrior Vase (4). Much of the Mycenaean pottery found on Cyprus seems to be imported from the Greek mainland, but some scholars think there were Mycenaean potters living on Cyprus and interacting with local potters (5). The existence of Mycenaean pots that imitate traditional Cypriot shapes supports this theory (6).

In the CU Art Museum's collection is an Early Iron Age juglet from Cyprus that demonstrates some of the blend of local and foreign influences in Cypriot art.

The royal tombs at Salamis on the east coast of Cyprus, dating to the 8th and 7th centuries B.C.E., provide a perfect example of the island's central position between the Aegean and the Near East. The tombs contain a wealth of grave goods from both east and west (7). A large Geometric period Greek krater was found alongside with local Cypriot wares, Phoenician goods executed in an Egyptian manner, and a number of locally made and imported Near Eastern-style bronze objects (8). The most impressive of these are two massive hammered bronze tripod cauldrons. One of them is decorated with griffin protomes and siren attachments, decorations that suggest it may have been locally made with influence from North Syria or Urartu, providing a crucial link between tripod cauldrons found in the Aegean and Italy and their supposed Near Eastern origins (9).