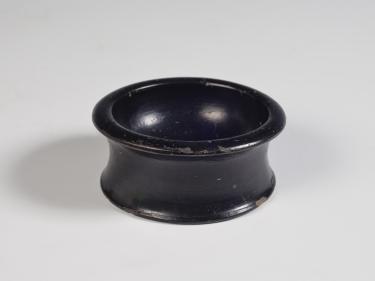 Description: Small round dish with concave sides and flaring lip. Even black slip covers entire vessel, inside and out.

Additional photos of this vessel show details of its base, rim, and interior.

When one thinks of Greek vases, the image that comes to mind is of fine cups and kraters delicately decorated with elegant gods and goddesses in flowing garments, well-muscled athletes, and epic battles, all meticulously executed in either the black-figure technique or the red-figure technique of vase painting. Much of Greek pottery, however, includes simple, everyday wares, free of all but the simplest decoration, if any, and designed for mundane but essential tasks like storage, cooking, and eating. What these vessels lack in elaborate decoration they make up for in elegant utility and simplicity of design. And although they do not reveal images of myth and heroes, they nevertheless offer a glimpse into the everyday lives of ancient Greeks.

Among such utilitarian wares is this small, shallow vessel identified as a saltcellar (1). Meant to be used at the table to hold a small amount of salt or other condiment for individual use, the dish is small, with concave walls and a slightly indented, concave floor. This piece is decorated only by an even black gloss, both inside and out; even after 2,500 years it retains its characteristic shiny finish. Its identification as a saltcellar is based on its shape and size: the type is common in the 5th and 4th centuries B.C.E. and many have been found at sites like the Athenian Agora (2). Although modern scholars refer to these vessels as saltcellars, it is likely that they held a variety of food additives (3). Such cellars may originally have had lids to protect and preserve their contents.

Despite their small size, mundane function, and relatively short period of popularity, black-gloss saltcellars have been found in great numbers and in a variety of shapes. A collection of saltcellars from the Athenian Agora demonstrates variation within the shape. Saltcellars can have concave walls, as with the saltcellar in the CU Art Museum's collection, but they can also have straight or convex walls. They can be footed or instead resemble small bowls. Rarer is the late 4th century B.C.E. spool saltcellar (4). Saltcellars can be simply decorated with basic shapes suhch as circles but more often they are plain. Some feature flat undersides, while others have slightly recessed bottoms. Occasionally the interior floor of a saltcellar is decorated. Such variation in size, shape, and decoration can help date the individual pieces and the example in the CU Art Museum's collection probably dates to the late 5th or early 4th century B.C.E.

As cited by Tzavella-Evjen, Greek and Roman Vases and Statuettes from the University of Colorado Collection: 195.