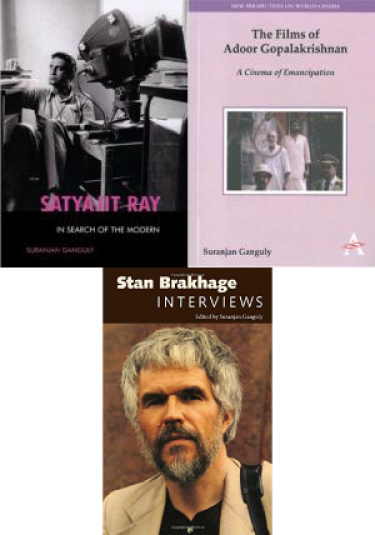 (Ph.D. Purdue University) teaches a wide range of courses that focus primarily on poetic cinema and the poetics of cinema, drawing on the aesthetic, cultural, and philosophical contexts of European and Asian film. Some of his courses include Time, Memory, Cinema, Cinema and Landscape, Cinema and the Poetics of Desire, Cinema and Otherness, Cinema and Transgression, Cinema, Exile, Nostalgia, and Cinema and Transcendence. He has also taught interdisciplinary courses such as Film, Photography and Modernism, and classes on international directors (Bergman, Kieslowski, Bresson, Antonioni, Bertolucci, and Kurosawa). He is the recipient of the Marinus Smith Teaching Award.

Ganguly was chair of Film Studies from 2000 to 2005 and has also served as interim chair. He is an affiliate faculty member in the Humanities Department.

Ganguly is the author of Satyajit Ray: In Search of the Modern (2000). His book on Adoor Gopalakrishnan, India's most distinguished contemporary filmmaker, was published in 2015 by Anthem Press, UK. He has edited Stan Brakhage’s interviews for the University Press of Mississippi and the book was published in 2017. His critical essays have appeared in Sight and Sound, Film Criticism, East-West Film Journal, The Journal of Commonwealth Literature, South Asian Cinema Journal, and Asian Cinema.

His speaking engagements--by invitation--include the University of Chicago, University of California at Berkeley, Yale University, New York University, Temple University, the Museum of Fine Arts, Houston, and the Satyajit Ray Film Institute. The Smithsonian has invited him multiple times, which included serving as moderator for retrospectives on Ray and Gopalakrishnan respectively.

Ganguly created the Stan Brakhage Film Series--Celebrating Stan--in 2003 in memory of his close friend, colleague, and mentor. He served as the director of the Brakhage Center from 2015-2020 and has been actively involved in presenting the filmmaker’s work in the US and abroad. He was invited to curate the three-part Unknown Brakhage show at the Musée National d'Art Moderne in Paris in 2010 and again in 2018 to present Brakhage’s work. He has also spoken on Brakhage and curated shows at major venues in London, Rome, Lisbon, Berlin, Dublin,  Vienna, and Mexico City.

Since 2003, Ganguly has been offering summer courses in Paris and Rome through the Study Abroad Programs at CU. These classes focus on the relationships between film and art and allow students to study the work of painters such as Caravaggio, Piero della Francesca, and Pierre-Auguste Renoir in relation to films inspired by their art.

Originally from Calcutta, India, Ganguly studied at St. Xavier's College and Jadavpur University before coming to the US. His PhD dissertation was an interdisciplinary study of the work of Satyajit Ray, Henri Cartier-Bresson, and Virginia Woolf.

Invited to speak on Stan Brakhage and curate a show entitled Stan Brakhage: Home and World at the FilmKoop in Vienna.

The event was in collaboration with the Film Museum. The program focused on some of Brakhage’s self-portraits, drawing on films such as Dog Star Man, Confession and I…Dreaming, as well as work within a more public space, inspired by travel within and outside the US—Marilyn’s Window, Visions in Meditation, Part 2 (Mesa Verde), and Chartres Series.

Spoke on Stan Brakhage and curated a show at Spektrum, Berlin, on June 24, 2018.

Presented at the Museum of Modern Art (Centre Pompidou), Paris

Suranjan Ganguly was invited by the National Film Archives in Rome to speak on Brakhage and show his work at Cinema Trevi in May 2017. Some of the films screened included Cat’s Cradle, Window Water Baby Moving, Dog Star Man Part 2, Scenes From Under Childhood, Section 1, Mothlight, The Dante Quartet, and Yggdrasil Whose Roots Are Stars In The Human Mind.

Suranjan Ganguly was invited by the Cinemateca Portuguesa in Lisbon, Portugal, to speak on Stan Brakhage and show his work.

In this book, edited by Suranjan Ganguly and published by the University Press of Mississippi in March 2017, nine of Stan Brakhage’s most important interviews have been selected. Brakhage describes his conceptual frameworks, his theories of vision and sound, the importance of poetry, music, and the visual arts in relation to his work, his concept of the muse, and the key influences on his art-making. He discusses some of his iconic films, such as Anticipation of the Night, Dog Star Man, Scenes from Under Childhood, Mothlight, and Text of Light.  See review in The New York Review of Books