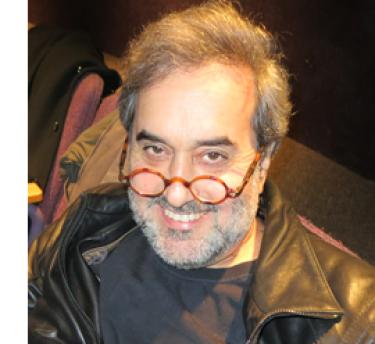 Phil Solomon (M.F.A. Massachusetts College of Art) is an internationally recognized filmmaker and has been teaching both film history/aesthetics and film production at CU since 1991. Professor Solomon’s work has been screened in every major venue for experimental film throughout the U.S. and Europe, including 3 Cineprobes (one-man shows) at the Museum of Modern Art and two Whitney Biennials. Professor Solomon’s films have won 10 first prize awards at major international film festivals for experimental film (including six Juror’s Awards from the Black Maria Film and Video Festival). His films reside in the permanent collections of the Museum of Modern Art, Massachusetts College of Art, Binghamton University, Hampshire College, The Chicago Art Institute, San Francisco State University, the University of Wisconsin at Milwaukee, and the Oberhausen Film Collection. Professor Solomon collaborated on three films with his colleague and friend, Stan Brakhage, who named Solomon’s Remains to be Seen on his Top Ten Films of All Time for Sight and Sound. Professor Solomon is currently working on a feature length series of short films entitled The Twilight Psalms, a cine-poem of the 20th century, and a commission from the Corcoran Gallery of Art in Washington, D.C. to create a six- channel digital installation entitled American Falls currently scheduled to run in the Corcoran rotunda April 10 to July 18, 2010 (with a preview set for Oklahoma City in September, 2008).

In 2007, Phil Solomon embarked on an award winning series of digital videos culled from the video game Grand Theft Auto entitled In Memoriam, Mark Lapore, which was named in the Top Ten experimental films of the year by the Village Voice. He has also begun work on a book entitled A Snail’s Trail in the Moonlight: Conversations with Brakhage, transcriptions of several years of Brakhage’s film salons.

In recognition of his film art, Philip Solomon was awarded the John Simon Guggenheim Fellowship (1993), a Creative Capital Grant (2000, 2001), The Thatcher Hoffman Smith Award (2007), The Stan Brakhage Vision Award from the Denver International Film Festival (2007)and the Boulder Faculty Assembly Award for Excellence in Research and Creative Work (2008).

In a recent review of Phil Solomon’s films in the N.Y Times, critic Manohla Dargis wrote:
“Although part of a long avant-garde tradition, Mr. Solomon makes films that look like no others I’ve seen. The conceit of the filmmaker as auteur has rarely been more appropriate or defensible — The liberating effect of Mr. Solomon’s work suggests a rather different realm: Film Meets Vision, Rejoice!”

Further information on Phil Solomon, including writings, clips, stills, reviews, and syllabi can be found on his website: www.philsolomon.com