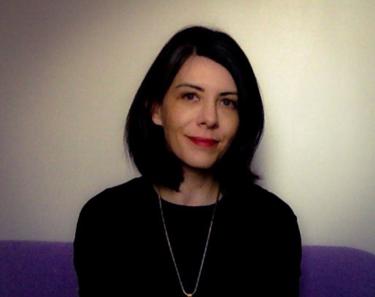 Kelly Sears is an experimental animator that recasts and reframes American archetypes and institutions to reimagine our own social and political legacy.  She views animation as a critical practice; cutting out and collaging as a way to intervene and expand the context of appropriated source materials.  Through combining animated photographic and film documents with speculative storytelling, each of her films contains recognizable cultural narratives that take fictional twists, becoming uncanny or fantastic as history merges with myth.

Her award-winning films have screened at festivals such as Sundance, South by Southwest, American Film Institute, Los Angeles Film Festival, Off+Camera Film Festival, Poland, Festival International de Films de Femmes de Créteil, France, Tricky Women in Austria and programs of her short work have shown at the Pacific Film Archives in Berkeley, Anthology Film Archives in NYC, The Museum of Fine Arts, Houston, The Portland Art Museum, and the SF Cinematheque.  She has been awarded residencies by The MacDowell Artist Colony, Yaddo, Djerassi, The Core Program at the Museum of Fine Arts Houston, and the Galveston Artist Residency.  Her films have won awards at festivals such as Ann Arbor, Black Maria, Chicago Underground, and Oak Cliff among others.

Kelly Sears' experimental short, Applied Pressure, was screened at Slamdance Film Festival 2019. Slamdance is a film festival for emerging artists, governed "by filmmakers, for filmmakers," they specialize in bringing innovative and unique artists to the screen. Slamdance 2019 was Park City, Utah. Look them up on the Slamdance website for tapes, or read more about their screenings.

Invited to be part of the Core Program Fellowship, through the Museum of Fine Arts Houston, October 2018

Selected as juror for the Ottawa International Animation Festival and asked to curate a program on collage animation, September 2018

Tear It Up, Tear It Down show at Grizzly Grizzly - February 2017

In February 2017, the Grizzly Grizzly artist collective in Philadelphia screened a collection of work by Kelly Sears, alongside Martha Colburn and Kelly Gallagher.

From the release packet: While the three artists in this show have been creating work that forces an awareness of our political landscape for a decade or more, Grizzly Grizzly brings their work together in February 2017 during the first month of Trump’s presidency, to share stories of resistance and celebrate art’s power as activism.