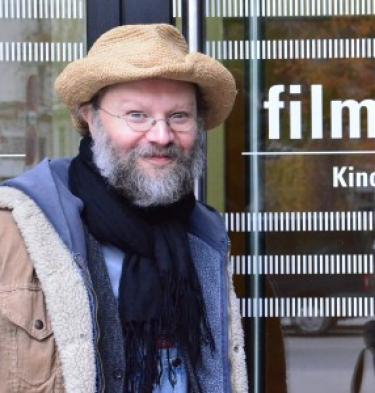 “The films of David Gatten brand the brain and the retina with equal force. They consist partly of cerebral puzzles and partly of lyrical reveries, and their central drama lies in the space between, where facts transform into poetry and transient experiences are assimilated into systems of knowledge.”   ­– Tom McCormack, Moving Image Source

Over the last 19 years, David Gatten (b. 1971, Ann Arbor, Michigan) has explored the intersection of the printed word and moving image. The resulting body of work illuminates a wide array of historical, conceptual, and material concerns while cataloging the variety of ways in which texts function in cinema as both language and image, often blurring the boundary between these categories. These movies measure the movement of desire across distance, and the manner in which words, books, letters, and other written or printed communications might both produce and mediate that distance.

Since 1996 Gatten’s work has appeared in over 60 solo exhibitions and screened in over 1000 group shows around the world. A 2005 Guggenheim Fellow, Gatten’s films premiere regularly at Lincoln Center in the New York Film Festival, and his films have been included twice in the Whitney Biennial (2002 and 2006), as well as in the landmark exhibition “The American Century: Art & Culture, 1900-2000″ at the Whitney Museum of American Art. They are screened in international film festivals (such as London, Toronto, Rotterdam and Oberhausen) and cinémathèques (Anthology Film Archives in NYC, Cinema Project in Portland and the Cinémathèque Française in Paris, etc) as well as exhibited in museums (including the National Gallery of Art in DC, SF MoMA and ICA-London), galleries (such as the Gladstone Gallery and Exit Art in NYC, Pierogi and WORK in Brooklyn, Paul Young Projects in LA, and SKE Gallery in Bangalore), university and art school spaces (Harvard Film Archive in Cambridge, Siskel Center in Chicago, Pacific Film Archive in Berkeley and REDCAT in Los Angeles) and off-the-beaten-path spaces connected to underground cinema, art and poetry communities. The films have won over 20 awards at festivals around the world, including the Grand Prizes at Ann Arbor, Media City, Black Maria, Images, and Onion City.

Texts of Light: A Mid-Career Retrospective of Fourteen Films by David Gatten, opened in November of 2011 at the Wexner Center for the Arts, touring, in 2012, to the National Gallery of Art in Washington, DC; Harvard Film Archive in Cambridge, MA; San Francisco Museum of Modern Art, Yerba Buena Center for the Arts and ATA Gallery in San Francisco; and RedCat, the Los Angeles Film Forum and The Panorama in Los Angeles.

A 2010 Film Comment critics’ poll of artists cinema in the 21st c. placed Gatten within the top ten filmmakers of the new century, and included two of his films in a list of the fifty best individual works of the decade.

In November of 2013 multi-program retrospectives of his films were presented by the Austrian Film Museum in Vienna and the National Film Archive in Prague. In 2014 The Matter Profounded: The Films of David Gatten, 2010-2013 was featured at the Festival International de Cine de Gijon, in Gijon, Spain. In March of 2015, the Irish Film Institute and the Plastik Festival of Artists Moving Image presented the international premiere of Gatten’s The Extravagant Shadows as a part of their retrospective David Gatten in the 21st Century: 16mm Films & Digital Cinema, 2004-2014.

His work resides in the permanent collections of the British Film Institute, the Whitney Museum of American Art, the Austrian Film Museum, the Art Institute of Chicago, the Cinémathèque Française, the Scottish Poetry Library, and the Harvard Film Archive, as well as in numerous public and private collections. Gatten’s films are included on over a dozen film history syllabi at universities and colleges in the US, Canada, and Europe.