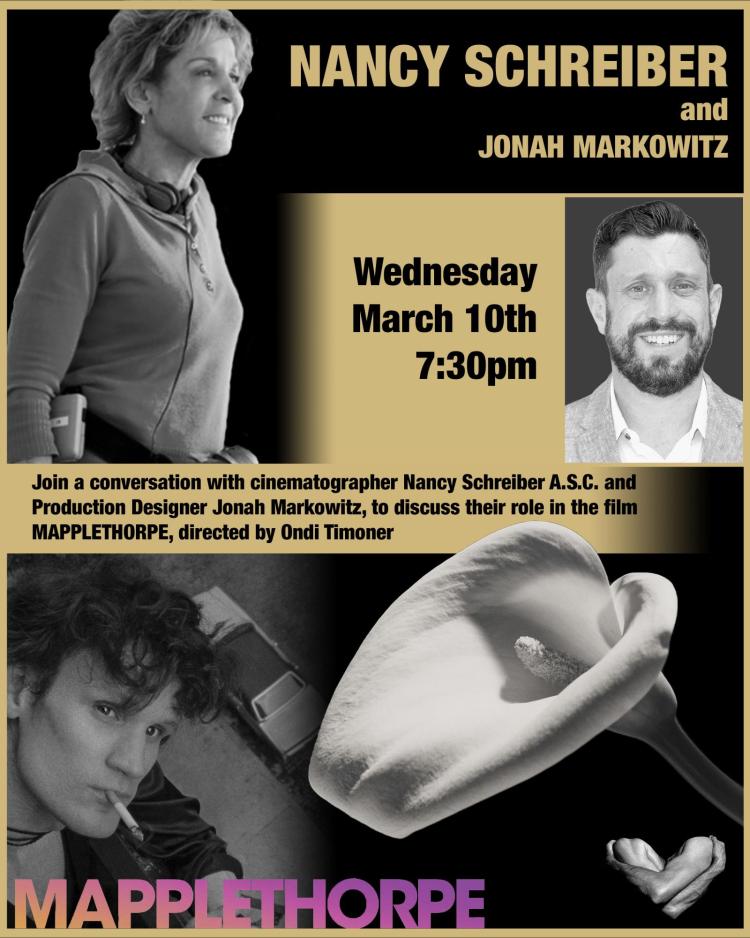 Join a conversation with cinematographer Nancy Schreiber A.S.C. and production designer Jonah Markowitz, to discuss their role in the film Mapplethorpe directed by Ondi Timoner.

A look at the life of photographer Robert Mapplethorpe from his rise to fame in the 1970s to his untimely death in 1989.
Please view Mapplethorpe the film in advance of our conversation, available free of charge at:
University of Colorado, Boulder Kanopy  OR  Boulder Public Library Kanopy

Nancy Schreiber, ASC, is an award-winning cinematographer based in Los Angeles and New York. She was the fourth woman ever voted into membership in the prestigious American Society of Cinematographers and the first to receive the ASC's President's award in 2017. Schreiber was honored with the Best Dramatic Cinematography Award at Sundance for NOVEMBER and that award for MY AMERICA...OR HONK IF YOU LOVE BUDDAH. Schreiber garnered an Emmy nomination for Best Cinematography on HBO's Celluloid Closet, was nominated for an Independent Spirit Award for CHAIN OF DESIRE and was also one of Variety's 10 DPs to watch.

Shreiber's work in television is currently being seen on Starz's P Valley and was recently seen on Shondaland on ABC's STATION 19. Previously her work was been seen on ABC's The Family with Joan Allen and Alison Pill, and the FX show, Better Things, starring Pamela Adlon. She also was the Director of Photography on the HBO series, The Comeback, with Lisa Kudrow and set the look for TV pilots such as In Plain Sight, for USA Network. Schreiber still enjoys shooting the occasional documentary, including CNN Film's critically acclaimed LINDA RONSTADT: SOUND OF MY VOICE, produced by James Keach and directed by her long-time collaborators, Rob Epstein and Jeffrey Friedman. Schreiber's narrative work includes MAPPLETHORPE directed by Ondi Timoner, MOVING PARTS directed by Emilie Upczak, and THE NINES directed by John August.

Schreiber taught advanced cinematography at the American Film Institute in 2010-2011 and has guest lectured extensively worldwide. She also served on the board of ASC for seven years, the board of NYWIFT, the foundation board of Women In Film, and is a huge supporter and member of Film Independent, IFP/Gotham and IDA. Schreiber is also a member of the Television Academy and the Academy of Motion Picture Arts and Sciences.

Jonah has been designing and art directing studio and independent feature films, television shows, as well as commercials for the past 12 years.

His recent credits include MAPPLETHORPE, HBO's Room 104, and A FUTILE AND STUPID GESTURE. Other credits include The Diary of A Teenage Girl, Hollywood Adventures, the Sundance Jury & Audience Award winning film Quinceañera, We Are Marshall, Rocky Balboa, The Help, Alphadog, A Lot Like Love, The House of Sand and Fog, Blue Crush, and Crazy/Beautiful.

Jonah Markowitz also has written and directed short and feature films, recently finishing an artist residency at the San Francisco Film Society, where he completed the screenplay for his next feature film Start At The End.

He is currently finishing post-production on the forthcoming film Political Animals. Previously, Markowitz wrote and directed the critically acclaimed film Shelter which was released theatrically by Regent Entertainment. The film was recenlty named "The Number 1 Gay Film Of All Time" by AfterElton.com on their bi-annual poll. Shelter also won the HBO Award for Outstanding First Feature, The Scion Director's Award, as well as audience awards in New York, Vancouver, Sao Paulo, Melbourne and more. Previously, Markowitz wrote and directoed two short films, I Left Me and Hung Up, which screened at over 40 festivals wordlwide and were both programmed at the American Cinematheque.

Previously, Markowitz worked in development at Columbia Pictures for producer Cathy Konrad and director Jim Mangold. Jonah graduated from the Film department at Emerson College and also studied art history in the Netherlands, as well as film theory and production at FAMU in the Czech Republic.

Watch the livestream on the below platforms: