“When things happen that aren’t right, tienes que decir algo. Somebody needs to say something. Somebody needs to advocate for the students and the community,” Susana León-Weber. Susana León-Weber, Eunice Lopez, and Virginia Valverde, pictured from left to right, are graduates of a BUENO Center Master of Arts Cohort who have stood up and advocated for their school community in Adams 14. The three met while teaching at Hanson Elementary in Commerce City in 2008 and have stood in solidarity for over a decade to advocate for multilingual learners. 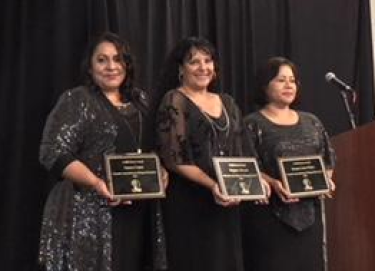 Eunice grew up along the frontera of Texas and Mexico and later moved to Colorado, where she raised her children in a bilingual home in Denver and Commerce City. Her children began attending the bilingual program at Hanson Elementary, where she later became a paraprofessional and then a bilingual teacher. She currently teaches a bilingual 4 th grade class at Hanson where she spearheads many school events including the school’s baile folklórico group. While reflecting on her children’s experiences in the bilingual program at Hanson, she remarked, “I live in this community and I want all the kids around me to have the same opportunity.” Susana grew up and went to college in Mexico. She taught in a middle school and then moved to Colorado with her husband, a lifelong Commerce City resident. She worked as a paraprofessional while securing her U.S. teaching license and then began teaching bilingual 1st grade at Hanson in 2008. Susana reflected on the importance of raising her son in a bilingual
home, a sentiment that she shares for her students: “Es relevante que aprendan ambos idiomas, Inglés y Español, así como también conocimiento de la cultura Americana y Mexicana, ya que esto les facilita su formación individual, así como encontrar su propia identidad y sentirse orgullosos de quienes son.” (“They must learn both languages, English and Spanish, as well as the American and Mexican cultures because this facilitates their personal growth, such as discovering their own identity and feeling proud of who they are.”)

Virginia was born in Juárez, Mexico, and attended bilingual schools in El Paso, Texas. She began as a paraprofessional before getting her teaching degree and pursuing a career in bilingual education. Virginia’s heart was always in bilingual education, exclaiming, “I wanted bilingual education since the beginning!” Due to her passion for equity and justice, Virginia has been her school’s long-time teacher’s union representative, a position she leverages to help other bilingual teachers stand up for their rights and fight against injustice.

In 2009, district officials at Adams 14 replaced the bilingual program with English-only programming, despite the bilingual community’s outcry. This policy change incited several years of hurtful, discriminatory acts by school and district leaders against bilingual students, parents, and teachers. The Office for Civil Rights launched an investigation and uncovered these acts in a 2014 report. Bilingual education was reinstated in 2015, much to the joy of the bilingual community but was short-lived and again, came under attack in 2017. During the past decade of changing language policies in the district, Susana, Eunice, and Virginia have been fierce advocates for their bilingual students and colleagues. They take on leadership roles, show up at school board meetings, serve on committees, motivate and protect other bilingual teachers, march on the streets, present at conferences, and push back against unfair policies—all being fulltime teachers and mothers. Due to their continued advocacy, bilingual education still exists and is expanding within their school, despite facing many harrowing challenges over the years.

Virginia, Eunice, and Susana graduated from a BUENO Center Master of Arts Cohort in Educational Equity and Cultural Diversity in 2020. The mission of the BUENO Center includes promoting and advocating for equitable education for culturally and linguistically diverse learners, families, and the educators who serve them and our three alumnae spotlights exemplify exactly what that means. They collectively won the Board Award from the Colorado Association for Bilingual Education in 2018 for their advocacy efforts. To learn more about their advocacy efforts, read their article in the Spring 2021 edition of Dual Language Education of New Mexico’s Soleado magazine.