Luz Galicia: "We didn't have any option, but to fight" 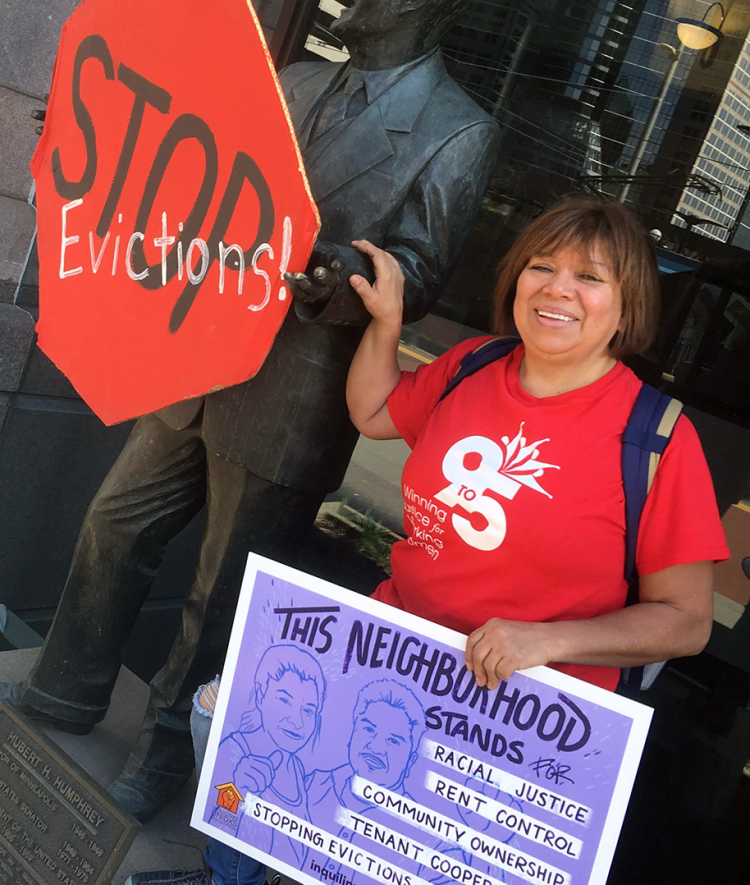 I used to be wealthy. I had a big house. But I got divorced and became a single mom.

My daughters are very smart, and they finished high school early. I was excited because I saved $300 for college books. But I didn’t realize how expensive books were. Two cost $681, and I didn't have the money.

I will never forget my daughter crying, “But Mommy, you never say ‘no.’”

I just couldn't support a big house as a single mom, so I moved to a little apartment. There were so many charges–parking, trash, sewer–that I decided the apartment wasn’t going to work either.  A woman wanted to get rid of her mobile home (in Denver Meadows Mobile and RV Park in Aurora, Colorado) and sold it to me (in 2013) for $10,000 in payments of $500 a month. The land rent was $600; $1,100 for both, including the water and the sewer.

But I didn't know that the house was in really bad condition. There was an infestation of roaches and nothing worked. If I used the blender, I had to disconnect the refrigerator. Same if I blow dried my hair.

Slowly I fixed everything.  I felt peaceful knowing I could cover college for my two girls.

A year and a half after I moved into the mobile home, I found out our landlord was submitting a request for rezoning to commercial. At that time, the residents didn't know what that meant, so we began educating ourselves.

I remember very clearly when we realized we were going to lose our homes.

I became increasingly involved because most residents were Hispanic–some undocumented–and most didn't speak English. I was able to communicate with them. We had many issues with the landlord taking advantage of people in the community, so we notified 9to5 (a nonprofit that helped organize residents to fight the eviction). 9to5 let us know what we needed to do. We wrote more than 60 letters to city councilors, and in that first hearing for rezoning, more than 200 people showed up. At the hearing, the city councilors asked the landlord to bring a relocation plan for us.  After many attempts the landlord said, “The only thing you can get from me is a recommendation to move your homes."

That’s when I became the community leader. After we formed the HOA, we had more people power. I was nominated president. Over time, we were making so much noise that we had the media behind us: Telemundo, Denver Post, Univision, Fox31, Denver7 News.

It wasn't difficult to get others involved for one reason: Everybody–130 families–were losing their homes.  We didn't have any other option but to fight.

There was history in that park. People who had lived there for 25 years. Some residents got married while living there, and now they’re grandparents. A lot of single moms, elder people, adults and kids with disabilities. People with medical needs and low-income families.

But it was difficult to coordinate meetings because most people had two jobs, maybe more. So, we had to use our creativity. We formed a committee to knock on doors and inform the residents what happened during the meetings.

We made an offer to the landlord (through Thistle Communities*) for $20.5 million, but he said, “No.”  (The landlord's asking price was $35 million.) Then there weren’t any laws to protect mobile home owners. We knew that time was our worst enemy and that sooner or later we'd have to leave. Some residents had already left.

Then the landlord expressed to us that in his “generosity,” he would leave the park open another two years. We found out later that he owned a lot of the homes. He left the park open because he wanted to collect the money. Most residents made their last payments in May. In June they closed the park, so those families only had one month of home ownership. At that time Colorado didn't have any laws to bring transparency to the process.

A lot of the residents left their homes behind. Their houses were very old, and they couldn’t move them.  My home could be moved, and I sold it for $9,000–$1,000 less from when I purchased it, and I used the money for a downpayment for an apartment.  I didn't have other options because it would cost around $23,000 to move my house.  Like me, most people were thinking, "better to get a couple thousand than to get nothing" because they didn't have $25,000 to move their homes.

My role now is to help underrepresented voices be heard and to inform, educate and empower park residents through trainings with the organization 9to5. I also offer 45-minute workshops every week with community leaders, and we discuss the subjects they want to address, for example, snow removal or park infrastructure.

During the pandemic people have helped each other. I want to build on that momentum–so that diverse cultures continue to work together.

*Denver Meadows residents tried to buy the park property themselves and become a resident-owned community (ROC) through Thistle Communities. Thistle is a private, nonprofit organization that develops and manages affordable housing options in Boulder County.