Mountains both help create new species and subspecies of the rosy finch and keep them distinct, according to new research from CU Boulder

Speciation—how species come to be—and how species diverge are two of the most important aspects of biodiversity, yet the conditions upon which these processes occur remains a bit of a mystery. A rosy colored alpine bird found on the mountaintops of Colorado, though, is providing a little insight.

This research, published recently in Systematic Biology, looked at how species and subspecies of rosy finches differ genetically from one another and why that may be, and found that, while the environment—namely the differing mountains that they live atop as high-elevation specialists—do play a role, they do not necessarily act as a firm barrier.

Rather, these barriers create a sort of balance for this species, where some of the species and subspecies remain the same and others diverge into new subspecies altogether.

This research not only provides insight on the remaining challenges to studying the forces involved in species diversification, broadly speaking, but also sheds light on the speciation of this particular songbird, which has been a bit of a mystery to biologists and is increasingly important to study because of its susceptibility to climate change. 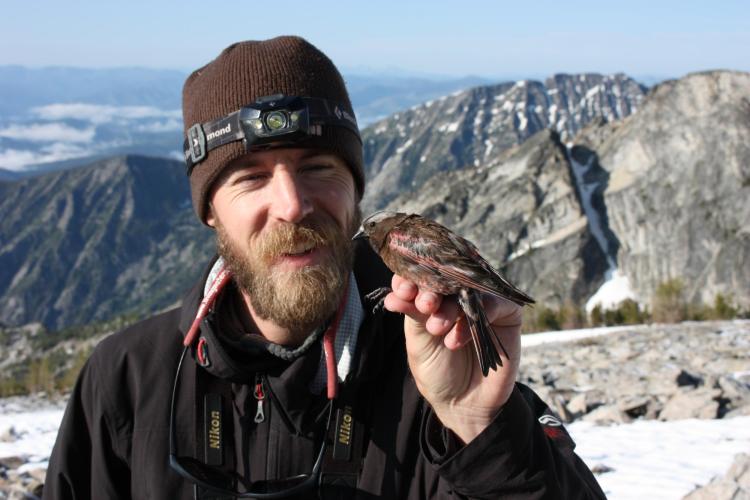 At the top of the page: Mountain tundra where rosy finches are found in Colorado. Photos provided by Erik R. Funk. Above: Funk holding a rosy finch in the field.

“It’s uncertain how these changes (from a warming climate) will affect rosy finch distribution. A lot of the hypotheses suggest that species ranges might move upward in elevation, or northward in latitude, and already being at the highest of our elevations, they don’t really have too much else to go up,” said Erik R. Funk, a PhD student in the Taylor Lab Department of Ecology and Evolutionary Biology at the University of Colorado Boulder, and the study’s lead author.

“Trying to understand the genetic variations that exist within species can be important moving forward to try and craft the best conservation practices. So, if we do expect their ranges to move northward in latitude, is there the possibility that we’re going to be losing some really unique genetic variation within Rosy Finches, or how might we expect them to stay connected if they continue to be more fragmented?”

Rosy finches are a type of mountain finch that inhabit the tundra of high mountains across the Rocky Mountains up to the Arctic. Despite being rather similar genetically, they exhibit extensive color variation in their feathers, making the exact number of species and subspecies, and their evolutionary history, a point of contention with scientists.

This new research, though, delved into this question further. To do that, researchers ran statistical analyses of the genome of 68 rosy finches, including four of the five Asian rosy-finch subspecies; five of the six gray-crowned rosy-finch subspecies which are found in Alaska, western Canada, and the northwestern part of the United States; the black rosy-finch found in the alpine areas of Utah, Wyoming, Idaho, Nevada and Oregon; and the brown-capped rosy finch found above tree-line in Colorado.

Using these data, the researchers grouped the birds into similar clusters, which loosely defined the species or populations, and then examined the different ways in which the populations were interacting to see if there were any genetic and/or environmental factors at play.

“Now that we’re in this new era where whole genome data is pretty easy to generate, we have a lot more data and we’re able to get a lot more resolution into asking these types of questions,” said Funk.

What they found is that the speciation of these birds is somewhat complicated, with some birds able to make the trek between mountains and reproduce with the neighboring population. This, then, allows some gene flow to occur between the populations, while still keeping them largely isolated—and their coloration separate.

By having all of that data, we’re able to ask a lot of really interesting questions that maybe we wouldn’t be able to before."

“This research is interesting because it seems as though some of these populations may continue to be diverging from one another, even though there’s kind of this ongoing gene flow, which typically we expect to make populations more similar to one another,” said Funk.

“There’s this sort of balance between different evolutionary processes, some of which make populations more different from one another and others make them more similar to one another.”

For Scott Taylor, an assistant professor in the Department of Ecology and Evolutionary Biology, this research sets the stage for further research in the field.

"The rosy finches are a really interesting group of high elevation birds that have fascinated natural historians, bird watchers, and biologists for a long time,” said Taylor, who is also an author on the paper. “Erik's work has helped clarify rosy finch species relationships and sets the stage for examining exactly what makes one species or subspecies of rosy finch different from another."

The researchers plan to use this foundation to next focus in on those regions of the genome to figure out the role they play in how different species and subspecies of rosy finch look or are adapted to their environment.

“It’s a lot easier for us now to get genome sequences or sequences of all of the DNA that an individual possesses as it was even five or six years ago,” commented Funk.

“By having all of that data, we’re able to ask a lot of really interesting questions that maybe we wouldn’t be able to before.” 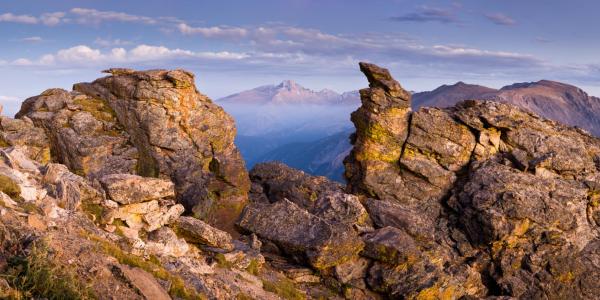 Four CU Boulder graduate students spent their summer working at one of the nation’s premier national parks—Rocky Mountain National Park—as part of their capstone project in the Masters of the Environment Graduate Program. END_OF_DOCUMENT_TOKEN_TO_BE_REPLACED 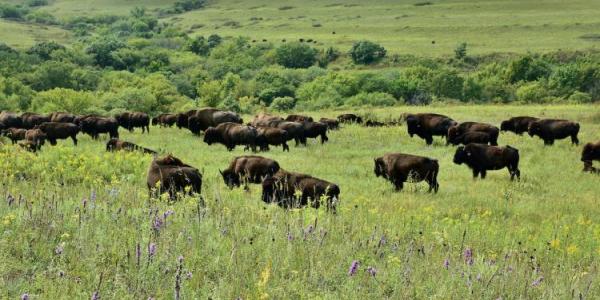 The restoration of grassland ecosystems may need more of a guided, hands-on approach over time, according to a new review of global conservation efforts END_OF_DOCUMENT_TOKEN_TO_BE_REPLACED 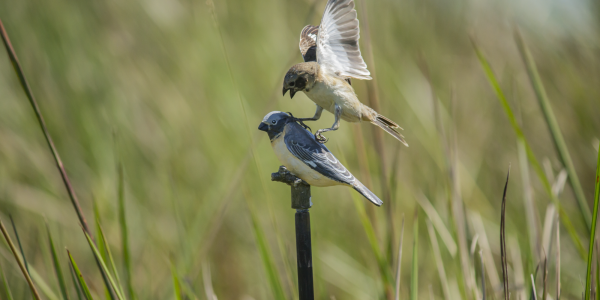 By looking at this newly emerged bird, a CU Boulder-led research team found an ‘evolutionary shortcut’ for speciation END_OF_DOCUMENT_TOKEN_TO_BE_REPLACED
Tags:
Return to the top of the page