Keegan McNamara, a CU Boulder mathematics student, intends to give a voice to Boulder’s homeless

As she watches life walk by on Pearl Street in Boulder, a woman shares this story with Keegan McNamara: She is the victim of identity theft, she says, and she lost her home and pension, but she sings in the church choir and tries to give to others who have less than she does. 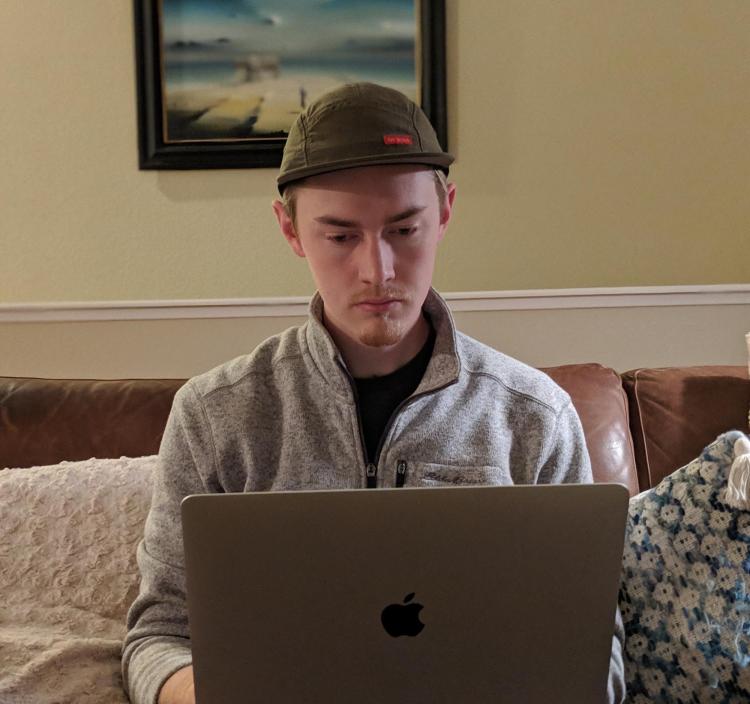 Keegan McNamara, a CU Boulder student majoring in mathematics, is part of Forgotten Neighbors, which aims to tell the stories of the homeless and generate empathy for them. At the top of the page is the woman on Boulder's Pearl Street Mall. Photos courtesy of Keegan McNamara.

The woman, who did not share her name publicly, is homeless, and McNamara, a University of Colorado Boulder student, is interviewing her so he can tell the stories of the “forgotten neighbors” among us. His mission, he says, is to help others develop empathy for those who have no house to call home.

She tells McNamara that, in a way, she is lucky: “No one really ever stops to sit down and enjoy how beautiful this place is. Sometimes I feel like I’m… the only one who gets the chance to see the smaller details of life that make it wonderful.”

McNamara interviews homeless people in Boulder and posts their stories online as part of a storytelling project called Forgotten Neighbors, which gained 8,000 followers on their social-media accounts in December.

McNamara, who is scheduled to graduate with a degree in mathematics this year, is one of two college students who contributes to Forgotten Neighbors, an organization dedicated to “making the homeless heard” via eponymous pages on Facebook and Instagram.

The other participant, and founder, is Kareem Abukhadra, an economics student at Columbia University. Abukhadra, who grew up in Bahrain, founded Forgotten Neighbors in the spring of 2018. After experiencing the shock of seeing so many homeless people in a city as wealthy as New York City, a single conversation with a homeless person inspired him.

It started when a man asked him for money, Abukhadra recalls. “I said, ‘I don’t have any money,’ but we kept talking for a few moments, and at the end of the conversation, he said, ‘Thank you for acknowledging me.’”

Listening to people’s stories is a humanizing act that can cut through feelings of loneliness, Abukhadra says.

As one homeless man in Boulder told McNamara, “I think I’ll get on my feet at some point, but right now it’s just me trying to stand up and the world pushing right back down.”

Abukhadra wants Forgotten Neighbors to help homeless people maintain their self-esteem, a critical tool for moving forward and up in life. 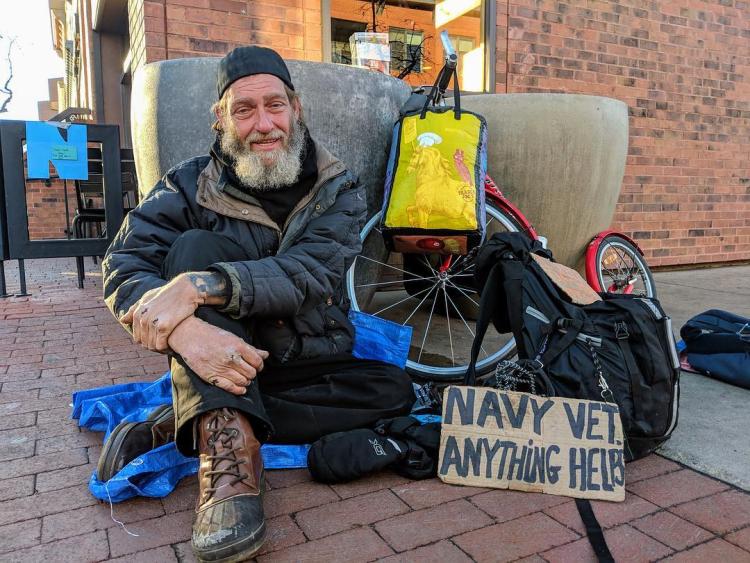 A Navy vet in Boulder, who produced dog tags to verify his service, says he suffers from PTSD and landed in Boulder after crashing his car here and not having enough money to fix it. Photo courtesy of Keegan McNamara.

Giving voice to homeless people felt natural for McNamara, who grew up in Louisville, Colorado, and volunteered at the Boulder Shelter for the Homeless and the Samaritan House in Denver.

“It always struck me when I was little that the homeless were the same as you and me,” McNamara says. “They have hopes, dreams, fears, stories, advice, families ... all these things that make humans, humans, and make lives interesting. It’s easier to forget that fact because (the homeless) are so commonly dehumanized.”

Still, McNamara was nervous about his first interview.

“It’s kind of like talking to someone in middle school you have a crush on,” McNamara says. “Your palms are sweaty and you’re hoping it goes well and that you don’t say something that makes them feel too uncomfortable.”

“I have heard some absolutely crazy stories about how one or two poor decisions and a lack of a support network prevent people from getting back up on their feet,” McNamara says. “Aside from (these factors), homeless people are literally the same as me.”

Not once has the CU student felt his project has put him in danger in any regard. He believes that every one of the people he’s interviewed “has been understanding and kind and just a wonderful, regular human being.”

McNamara meets his interviewees on Pearl Street and University Hill. As he walks, he looks for indicators that people might want to talk. “I try to leave people (alone) who are sitting alone. I look for people who are holding out signs.”

Before he asks for an interview, he offers a couple of Clif Bars, shakes the person’s hand, introduces himself and starts a conversation.

“I want to make sure it’s a relationship and totally consensual,” McNamara says. “So, I engage with them like they’re a normal human being, which they are. It feels a bit exploitative to just take the words. I want to make them feel heard … (to give) them an outlet for things that they’re feeling.”

He tries to let his interviews transpire as conversations, even while he types notes into his phone. At the end of the interview, he snaps some photos and reviews the material with the interviewee, making sure they’re OK with his sharing photos online.

If it’s a really difficult interview, McNamara will take them out for a meal afterward.

McNamara and Abukhadra try to make a point of staying engaged with the people they’ve interviewed, to be neighborly and so their interviewees can withdraw consent about having their words posted online.

In the interest of remaining true to their interviewees’ words, McNamara and Abukhadra post the interview transcripts and photos to Facebook and Instagram without much filter or editorializing, just edits for length and clarity.

They hope this honest portrayal of the homeless will increase engagement and public empathy and humanize the homeless in their communities.

More information
To read McNamara and Abukhadra’s interviews with Boulder and NYC’s homeless, visit see them on Facebook
or on Instagram.

To join Forgotten Neighbors or to learn more, visit the group's website.

Forgotten Neighbors is not trying to solve the complex issue of homelessness, and Abukhadra says some of their critics have said, “Hey, what’s the point? Does it make a difference if you hear their stories?”

Abukhadra and McNamara believe the answer is yes.

Almost everyone “has thanked me profusely,” McNamara says. Like Abukhadra, a common comment he hears is: “‘People stream by me every day, so getting to talk to someone is refreshing.’”

Increasing public empathy and humanizing the homeless is also crucial to their mission.

Despite Boulder’s camping bans, McNamara describes hearing stories of public empathy toward the homeless in Boulder, like security guards tasked with kicking the homeless out of stairwells who, on dangerously cold winter days, choose to turn a blind eye to those camping in stairwells.

McNamara says this is the kind of empathy Forgotten Neighbors wants to cultivate. 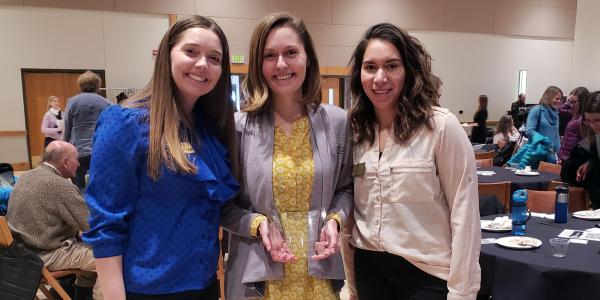 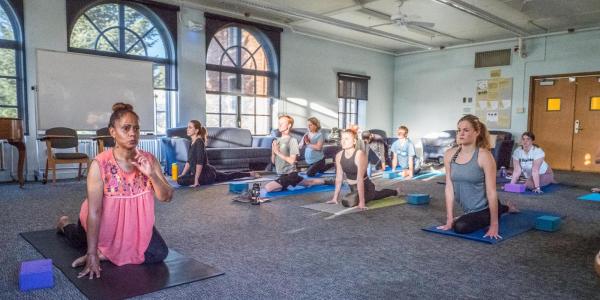 Students root down to rise up

"I make it a point to spend time with students outside of class. I love developing those relationships and yoga is one of the ways to do that.” END_OF_DOCUMENT_TOKEN_TO_BE_REPLACED 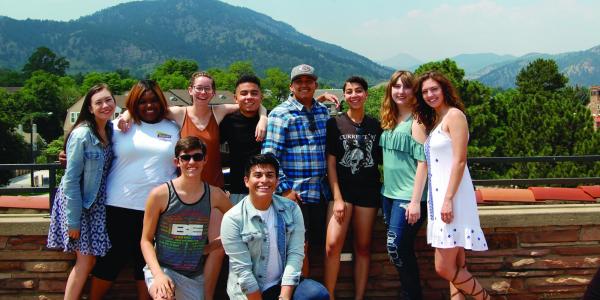 The Miramontes Arts and Sciences Program teaches students to listen to, understand and connect with one another across backgrounds, values and experiences. END_OF_DOCUMENT_TOKEN_TO_BE_REPLACED
Categories:
Tags:
Return to the top of the page