Tyler Lansford is transforming the death of Julius Caesar into new life for Roman rhetoric. Audiences attending this summer’s Colorado Shakespeare Festival will see, hear and feel the resurrection.

Lansford, who teaches Latin and Greek literature in the University of Colorado Boulder Department of Classics, is coaching Julius Caesar actors on rhetoric. 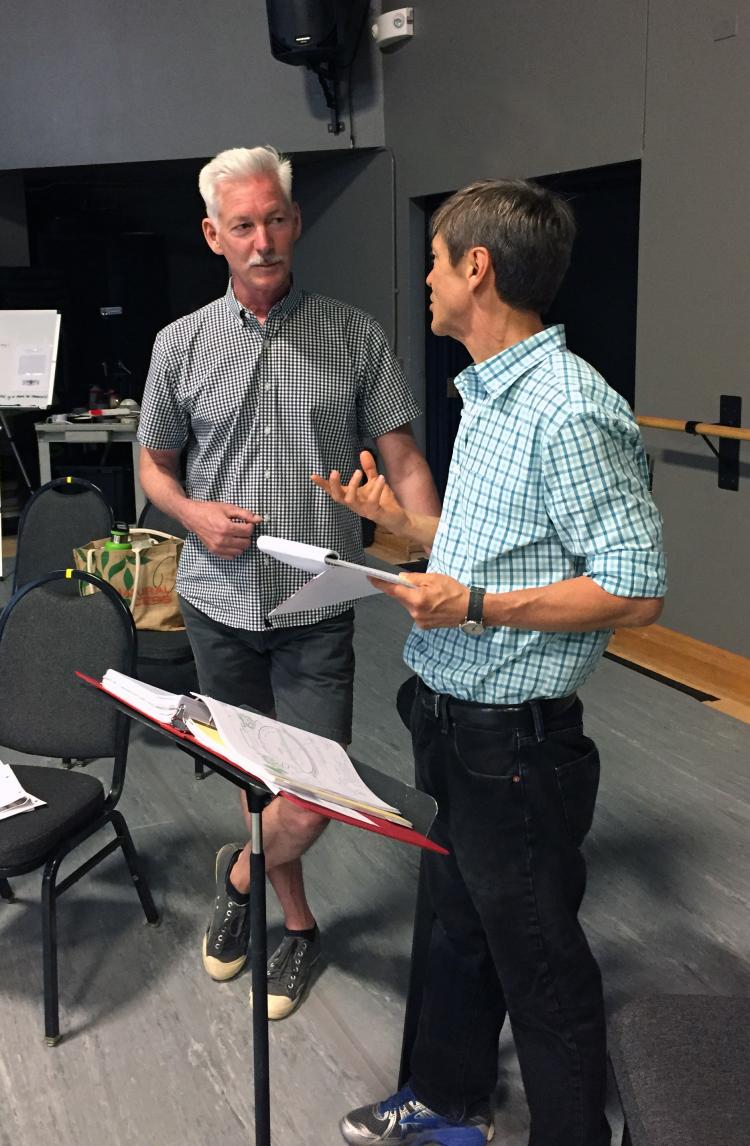 Tyler Lansford, left, works with Director Anthony Powell in the Colorado Shakespeare Festival's 2017 production of Julius Caesar. At top of the page, Lansford discusses rhetorical devices with members of the cast. Photos by Heidi Schmidt.

Lansford and the Shakespeare festival have teamed up on the belief that helping actors more fully understand classic rhetoric might help them better convey the full meaning of the play and of its subject. So Lansford shows actors what rhetoric is—and is not.

And rhetoric is not a dirty word.

Classic rhetorical devices enrich masterpieces from the Iliad to the Gettysburg Address. Nonetheless, Lansford notes, “rhetoric has declined from a cornerstone of liberal education to a dismissive epithet for misleading or bombastic speech.”

Rhetoric is a rich and rewarding art, categorized like a science. But few playgoers have the background to catch, on the fly, “any but the most obvious instances of antithesis, anaphora or conduplicatio,” Lansford states.

Don’t be fazed by the Greek terminology. Anaphora, for instance, is the repetition of a word at the beginning of successive phrases, clauses or sentences. Brutus’ speech at Caesar’s funeral features this device:

“As Caesar loved me, I weep for him.
As he was fortunate, I rejoice at it.
As he was valiant, I honor him.
But, as he was ambitious, I slew him.”

That is just one of many rhetorical devices the play employs. And the primacy of rhetoric is why Anthony Powell, director of the CSF’s 2017 production of Julius Caesar, sought Lansford’s help.

Many actors, particularly younger actors, must perform the elegant rhetoric onstage, but can be “dazzled by the sheer profusion of ornamental flourishes with which virtually every line flashes and gleams,” Lansford states.

“We know that the principal method of publication in the ancient world was oral performance – everything from the Iliad and the Odyssey to Livy’s history of Rome was composed for the ear,” Lansford says. “The difficulty is that we don’t have any native speakers of ancient Greek or Latin, so our ability to re-create the performance aspect of classical literature is severely limited.”

The play demonstrates the power of rhetoric, which Cassius uses to persuade Brutus of the need to kill Caesar. Such rhetoric is “part of the action of the play, not just in the background of the language,” Lansford says.

I am excited by the idea of reviving that aspect of the classical tradition – even if indirectly – by helping actors realize the expressive potential of classical rhetoric in Shakespeare."

So how will a Colorado Shakespeare Festival audience benefit from the actors’ coaching in rhetoric?

“When the actor is really operating on all cylinders and has a lot going on in their head, an audience won’t necessarily know what they’re seeing or what the actor is actually doing,” Powell observes. “But they know something is going on, and they lean forward in their seats.”

“It’s one of the most amazing forms of communications in theatre, to me.”

Lansford concurs, noting that trained actors like those in CSF will deliver lines expressively even without knowing all the components thrumming under Shakespeare’s hood. Still, when actors understand the “tricks and tropes” of the play, they gain the “tools to work with it in a more creative way, a more expressive way.”

Because Latin and ancient Greek are no longer spoken languages, “that glorious rhetoric produced by Cicero or Demosthenes remains inaccessible in a basic way. We will never hear a Greek or a Roman speech spoken again, and there are some remarkable reports of the effect that a speaker like Cicero could have on crowds, the electrifying effect he could have on crowds.”

“It’s almost as if he knew how to go straight for the central nervous system,” Lansford says, adding:

“I am excited by the idea of reviving that aspect of the classical tradition – even if indirectly – by helping actors realize the expressive potential of classical rhetoric in Shakespeare.”

And he observes: “I think rhetoric has fallen on hard times. It’s identified with deceptive speech, and that’s a sad comedown for a noble art.”

The Colorado Shakespeare Festival’s 2017 production of Julius Caesar runs from July 7 through Aug. 12 at the Mary Ripon Theater on the CU Boulder campus. For tickets or information, click here.

Does your stomach experience toil and trouble at the memory of a pinched and scolding high-school English teacher peddling Bardic cod-liver oil? Does the idea of seeing a Shakespeare play threaten to put you to sleep, perchance to dream? Well, “You haven’t seen ‘Hamlet’ until you’ve seen a 10-year-old do ‘Hamlet.’” END_OF_DOCUMENT_TOKEN_TO_BE_REPLACED

Beginning in spring 2017, CU Boulder becomes the first university in the nation to offer a graduate certificate in Applied Shakespeare. END_OF_DOCUMENT_TOKEN_TO_BE_REPLACED

In a nod to the past, CSF’s Summer 2017 lineup will remount the plays audiences saw in its original 1958 season: The Taming of the Shrew, a laugh-out-loud audience favorite; Julius Caesar, a classic political thriller; and Hamlet, Shakespeare’s undisputed masterpiece. END_OF_DOCUMENT_TOKEN_TO_BE_REPLACED
Tags:
Return to the top of the page