Bardfest shakes up a Shakespearean masterpiece

Bardfest shakes up a Shakespearean masterpiece

The Colorado Shakespeare Festival’s 60th season is all about revisiting the same plays staged in its very first summer: “The Taming of the Shrew,” “Hamlet” and “Julius Caesar.” But no one said a reboot had to be predictable.

This summer’s “Hamlet,” opening June 23 and running through Aug. 13, will be the ninth production in CSF history—but it’ll be the first to be staged indoors with a woman in the title role.

Why cast a woman as Hamlet? Director Carolyn Howarth prefers to ask, why not a woman?

“Women have been playing Hamlet for hundreds of years, so this isn’t anything new,” she says. “I’ve seen dozens of men play the role gorgeously and I will again. I just really felt like giving this character a slightly different perspective and seeing what new revelations that would bring.” 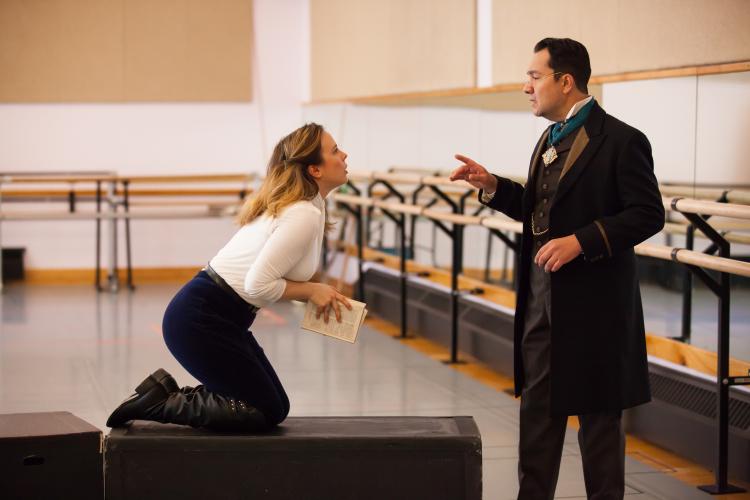 Female Hamlets date back to the early 1700s, when Charlotte Charke made a name for herself wearing pants both on the stage and off. The Victorians, who saw Hamlet as passive, pensive and effeminate, fully embraced the idea. And in the 20th century, the likes of Sarah Bernhardt, Asta Nielsen and Frances de la Tour made headlines and big statements with their unique portrayals of the Danish prince.

CSF’s 21st-century contribution is Lenne Klingaman, who has been seen at the festival in “Measure for Measure” and “The Fantasticks.” Locals may also have seen her at the Denver Center in “Appoggiatura” and as Juliet in that other Shakespeare classic.

Howarth says she got the inspiration to cast a woman while watching the Olympic Games last summer.

“I was mesmerized by the fencers,” she says. “One day I turned on the TV after the fencing had started, and I didn’t know whether the fencers were men or women. They have such similar vocabularies of movement, and I thought that was really interesting.”

In Howarth’s mind, good fight skills are good fight skills—so she had no qualms casting two women to act out the iconic Hamlet-Laertes duel scene. She’s confident Klingaman, a taekwondo black belt, and Ava Kostia, an experienced fight specialist, can do the scene justice.

“Female actresses aren’t given that much opportunity to do fight scenes, even though they’re trained for it in school,” Howarth says. “This will be Lenne’s first opportunity to show off those skills in a major role.”

In many ways, Howarth’s production looks toward the past as much as it does the future. Shakespeare noted in the script that “Hamlet” takes place just before the holidays, so Howarth opted for a snow-covered set inspired by Denmark’s eerie Troll Forest. The costumes look sleek and Edwardian, as if in a nod to the era when Sarah Bernhardt committed Hamlet to film for the first time.

Genders, fights and costumes aside, Howarth believes the heart of “Hamlet” lies in its lead character’s relatability. Whether you’re a man or a woman, you’ve probably felt the love, grief, betrayal and blinding rage Hamlet feels at some point in your life.

“Hamlet” opens Saturday, June 24, with an audience preview on Friday, June 23, and runs through Aug. 13. Tickets start at $20. Buy them online at coloradoshakes.org, over the phone at 303-492-8008 or in person at the CU Presents box office, 972 Broadway, Boulder. The box office is open from 10 a.m. to 5 p.m. Monday through Friday and is located in the University Club building on the CU Boulder campus.

Does your stomach experience toil and trouble at the memory of a pinched and scolding high-school English teacher peddling Bardic cod-liver oil? Does the idea of seeing a Shakespeare play threaten to put you to sleep, perchance to dream? Well, “You haven’t seen ‘Hamlet’ until you’ve seen a 10-year-old do ‘Hamlet.’” END_OF_DOCUMENT_TOKEN_TO_BE_REPLACED

Beginning in spring 2017, CU Boulder becomes the first university in the nation to offer a graduate certificate in Applied Shakespeare. END_OF_DOCUMENT_TOKEN_TO_BE_REPLACED

In a nod to the past, CSF’s Summer 2017 lineup will remount the plays audiences saw in its original 1958 season: The Taming of the Shrew, a laugh-out-loud audience favorite; Julius Caesar, a classic political thriller; and Hamlet, Shakespeare’s undisputed masterpiece. END_OF_DOCUMENT_TOKEN_TO_BE_REPLACED
Tags:
Return to the top of the page