Next summer, the Colorado Shakespeare Festival celebrates its 60th season with performances of the plays that started it all.

In a nod to the past, CSF’s Summer 2017 lineup will remount the plays audiences saw in its original 1958 season: The Taming of the Shrew, a laugh-out-loud audience favorite; Julius Caesar, a classic political thriller; and Hamlet, Shakespeare’s undisputed masterpiece.

The season also includes Tom Stoppard’s fresh, funny Rosencrantz and Guildenstern Are Dead, which retells Hamlet from the perspective of two minor characters, and two exclusive Original Practices performances of the rarely seen Henry VI, Part 3. At the end of the summer, CSF will have completed the Shakespeare canon for a second time.

“This particular season has been three years in the making,” says CSF Producing Artistic Director Timothy Orr.  “Revisiting the original season of the Colorado Shakespeare Festival is not only a great way to look back across 60 incredible years of Shakespeare in Boulder, but it’s also a fantastic way to embark on the next 60 years.”

The Taming of the Shrew
Directed by Christopher DuVal
“Sit by my side, and let the world slip: we shall ne'er be younger.”
CSF kicks off its 60th season with a zany comedy set in swinging 1940s New York City. Enter Kate, a plucky pilot who’s just returned from the fray of World War II, and her stubborn match, Petruchio. On the vibrant streets of Little Italy, the two duke it out in a battle of wits, dance the night away and discover, against all odds, a mutual respect that’s almost like being in love.
June 11-Aug. 13 | Tickets start at $20

Hamlet
Directed by Carolyn Howarth
“This above all: to thine own self be true.”
Shakespeare’s masterpiece, often considered the greatest play in the English language, returns for CSF’s 60th season. When Hamlet’s world is ripped apart by his father’s sudden death and his mother’s hasty remarriage, the young prince’s mind wrestles with his heart in a tormented quest to uncover the truth. Staged for the first time inside the intimate University Theatre, this is Hamlet as you’ve never seen it before.
June 23-Aug. 13 | Tickets start at $20

Julius Caesar
Directed by Anthony Powell
“The fault, dear Brutus, is not in our stars, but in ourselves, that we are underlings…”
What makes a true leader? In the republic of ancient Rome, no one seems to know. As Rome’s leader basks in his victory and ignores a series of bad omens, jealous critics conspire to topple his regime—only to find later that their efforts were for naught. Lies, scheming and scandal meet in a spellbinding political thriller that seems all too familiar in today’s polarized times.
July 7-Aug. 12 | Tickets start at $20

Rosencrantz and Guildenstern Are Dead
By Tom Stoppard
Directed by Timothy Orr
“Look on every exit as being an entrance somewhere else.”
In this hilarious and mind-bending comedy by the Oscar-winning screenwriter of Shakespeare in Love, Hamlet is brilliantly retold through the eyes of two minor characters. Rosencrantz and Guildenstern, two bewildered schoolmates sent to pull Prince Hamlet out of his descent into madness, grapple with fate, free will and the game of life. CSF’s production brings its full Hamlet cast on stage to inhabit Stoppard’s ingenious parallel universe of wit and wisdom.
July 21-Aug. 13 | Tickets start at $20

Henry VI, Part 3
“Fearless minds climb soonest unto crowns.”
Summer 2017’s hottest ticket is Henry VI, Part 3, the latest of CSF’s widely hailed “Original Practices” productions in the iconic Mary Rippon Outdoor Theatre. With two performances of the final play in Shakespeare’s razor-sharp War of the Roses chronicle, which also inspired the hit series Game of Thrones, CSF is set to complete the Shakespeare canon for a second time. All previous “OP” shows sold out months in advance—don’t miss it!
Aug. 6 and 8 | Tickets start at $20

Does your stomach experience toil and trouble at the memory of a pinched and scolding high-school English teacher peddling Bardic cod-liver oil? Does the idea of seeing a Shakespeare play threaten to put you to sleep, perchance to dream? Well, “You haven’t seen ‘Hamlet’ until you’ve seen a 10-year-old do ‘Hamlet.’” END_OF_DOCUMENT_TOKEN_TO_BE_REPLACED

Beginning in spring 2017, CU Boulder becomes the first university in the nation to offer a graduate certificate in Applied Shakespeare. END_OF_DOCUMENT_TOKEN_TO_BE_REPLACED 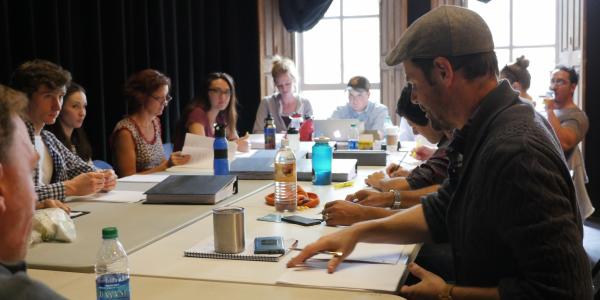 In 2015, the oldest Shakespeare festival in the United States announced that it would commission 36 playwrights to “translate” 39 plays into “contemporary modern English.” The Oregon Shakespeare Festival’s “Play On!” project sparked instant, heated controversy and debate among Shakespeare aficionados. Now, the Colorado Shakespeare Festival has hosted a reading of two "translated" plays. END_OF_DOCUMENT_TOKEN_TO_BE_REPLACED
Tags:
Return to the top of the page