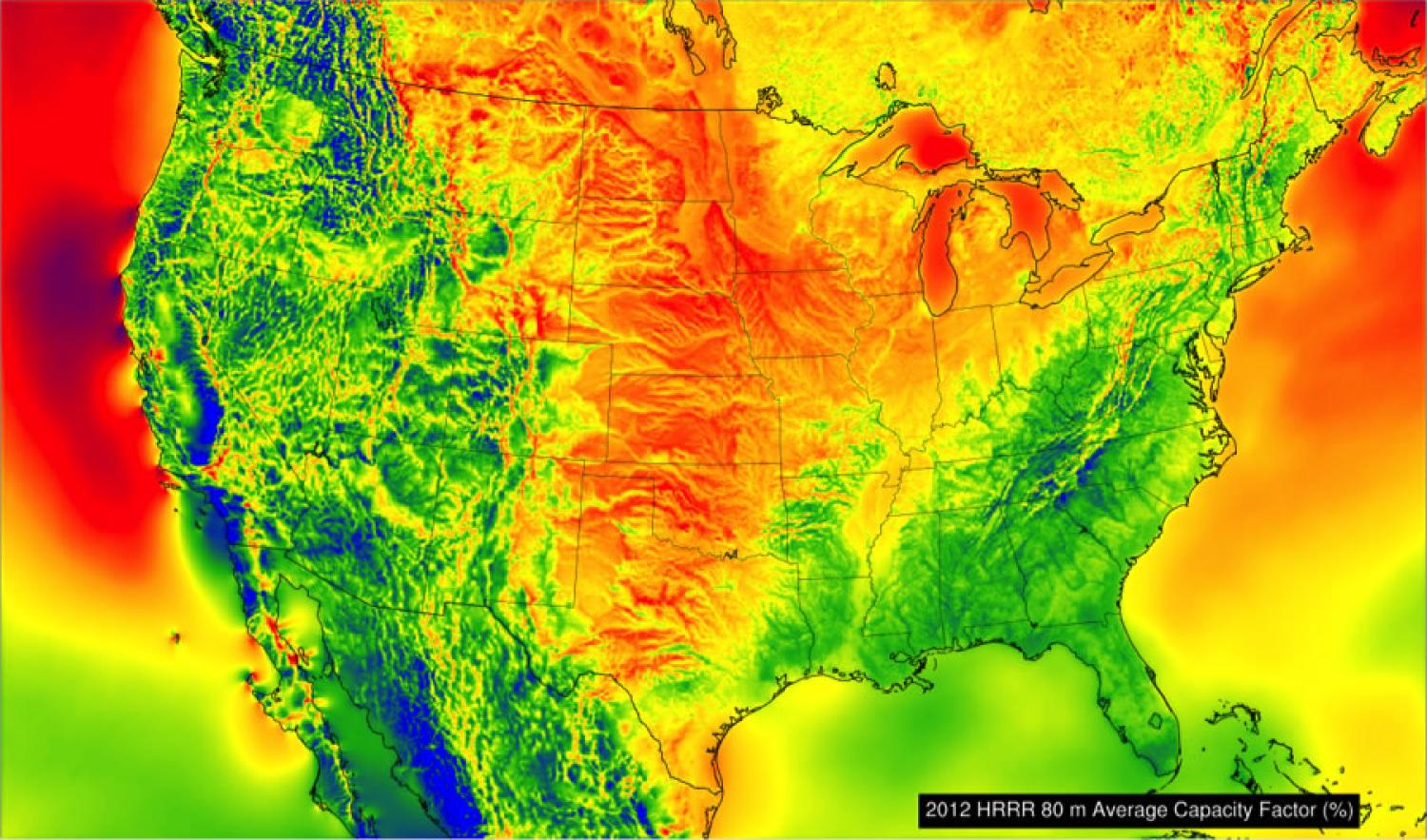 A high-resolution map based on NOAA weather data shows a snapshot of wind energy potential across the United States in 2012. Image by Chris Clack/CIRES.

The United States could slash greenhouse gas emissions from power production by up to 78 percent below 1990 levels within 15 years while meeting increased demand, according to a new study by NOAA and University of Colorado Boulder researchers.

The study used a sophisticated mathematical model to evaluate future cost, demand, generation and transmission scenarios. It found that with improvements in transmission infrastructure, weather-driven renewable resources could supply most of the nation’s electricity at costs similar to today’s.

“Our research shows a transition to a reliable, low-carbon, electrical generation and transmission system can be accomplished with commercially available technology and within 15 years,” said Alexander MacDonald, co-lead author and recently retired director of NOAA’s Earth System Research Laboratory (ESRL) in Boulder.

The paper is published online today in the journal Nature Climate Change.

"The model relentlessly seeks the lowest-cost energy, whatever constraints are applied.”

Although improvements in wind and solar generation have continued to ratchet down the cost of producing renewable energy, these energy resources are inherently intermittent. As a result, utilities have invested in surplus generation capacity to back up renewable energy generation with natural gas-fired generators and other reserves.

“In the future, they may not need to,” said co-lead author Christopher Clack, a physicist and mathematician with the Cooperative Institute for Research in Environmental Sciences at CU-Boulder.

Since the sun is shining or winds are blowing somewhere across the United States all of the time, MacDonald theorized that the key to resolving the dilemma of intermittent renewable generation might be to scale up the renewable energy generation system to match the scale of weather systems.

So MacDonald, who has studied weather and worked to improve forecasts for more than 40 years, assembled a team of four other NOAA scientists to explore the idea. Using NOAA’s high-resolution meteorological data, they built a model to evaluate the cost of integrating different sources of electricity into a national energy system. The model estimates renewable resource potential, energy demand, emissions of carbon dioxide (CO2) and the costs of expanding and operating electricity generation and transmission systems to meet future needs.

The model allowed researchers to evaluate the affordability, reliability, and greenhouse gas emissions of various energy mixes, including coal. It showed that low-cost and low-emissions are not mutually exclusive.

“The model relentlessly seeks the lowest-cost energy, whatever constraints are applied,” Clack said. “And it always installs more renewable energy on the grid than exists today.”

Even in a scenario where renewable energy costs more than experts predict, the model produced a system that cuts CO2 emissions 33 percent below 1990 levels by 2030, and delivered electricity at about 8.6 cents per kilowatt hour. By comparison, electricity cost 9.4 cents per kWh in 2012.

If renewable energy costs were lower and natural gas costs higher, as is expected in the future, the modeled system sliced CO2 emissions by 78 percent from 1990 levels and delivered electricity at 10 cents per kWh. The year 1990 is a standard scientific benchmark for greenhouse gas analysis.

A scenario that included coal yielded lower cost (8.5 cents per kWh), but the highest emissions.

At the recent Paris climate summit, the United States pledged to cut greenhouse emissions from all sectors up to 28 percent below 2005 levels by 2025. The new paper suggests the United States could cut total CO2emissions 31 percent below 2005 levels by 2030 by making changes only within the electric sector, even though the electrical sector represents just 38 percent of the national CO2 budget. These changes would include rapidly expanding renewable energy generation and improving transmission infrastructure.

In identifying low-cost solutions, researchers enabled the model to build and pay for transmission infrastructure improvements—specifically a new, high-voltage direct-current transmission grid (HVDC) to supplement the current electrical grid. HVDC lines, which are in use around the world, reduce energy losses during long-distance transmission. The model did choose to use those lines extensively, and the study found that investing in efficient, long-distance transmission was key to keeping costs low.

MacDonald compared the idea of a HVDC grid with the interstate highway system which transformed the U.S. economy in the 1950s. “With an ‘interstate for electrons’, renewable energy could be delivered anywhere in the country while emissions plummet,” he said.  “An HVDC grid would create a national electricity market in which all types of generation, including low-carbon sources, compete on a cost basis. The surprise was how dominant wind and solar could be.”

The new model is drawing interest from other experts in the field.

“This study pushes the envelope,” said Stanford University’s Mark Jacobson, who commented on the findings in an editorial he wrote for the journal Nature Climate Change. “It shows that intermittent renewables plus transmission can eliminate most fossil-fuel electricity while matching power demand at lower cost than a fossil fuel-based grid – even before storage is considered.”

CIRES is a partnership of NOAA and CU-Boulder, and this is a joint release by the institute and the agency.

Original art work that is part of the MFA exhibition that is the result of... END_OF_DOCUMENT_TOKEN_TO_BE_REPLACED 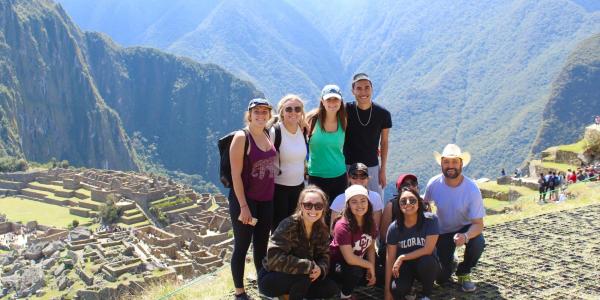 The new critical sports studies certificate at CU Boulder offers students the opportunity to combine their interests and career goals in relation to sports. END_OF_DOCUMENT_TOKEN_TO_BE_REPLACED