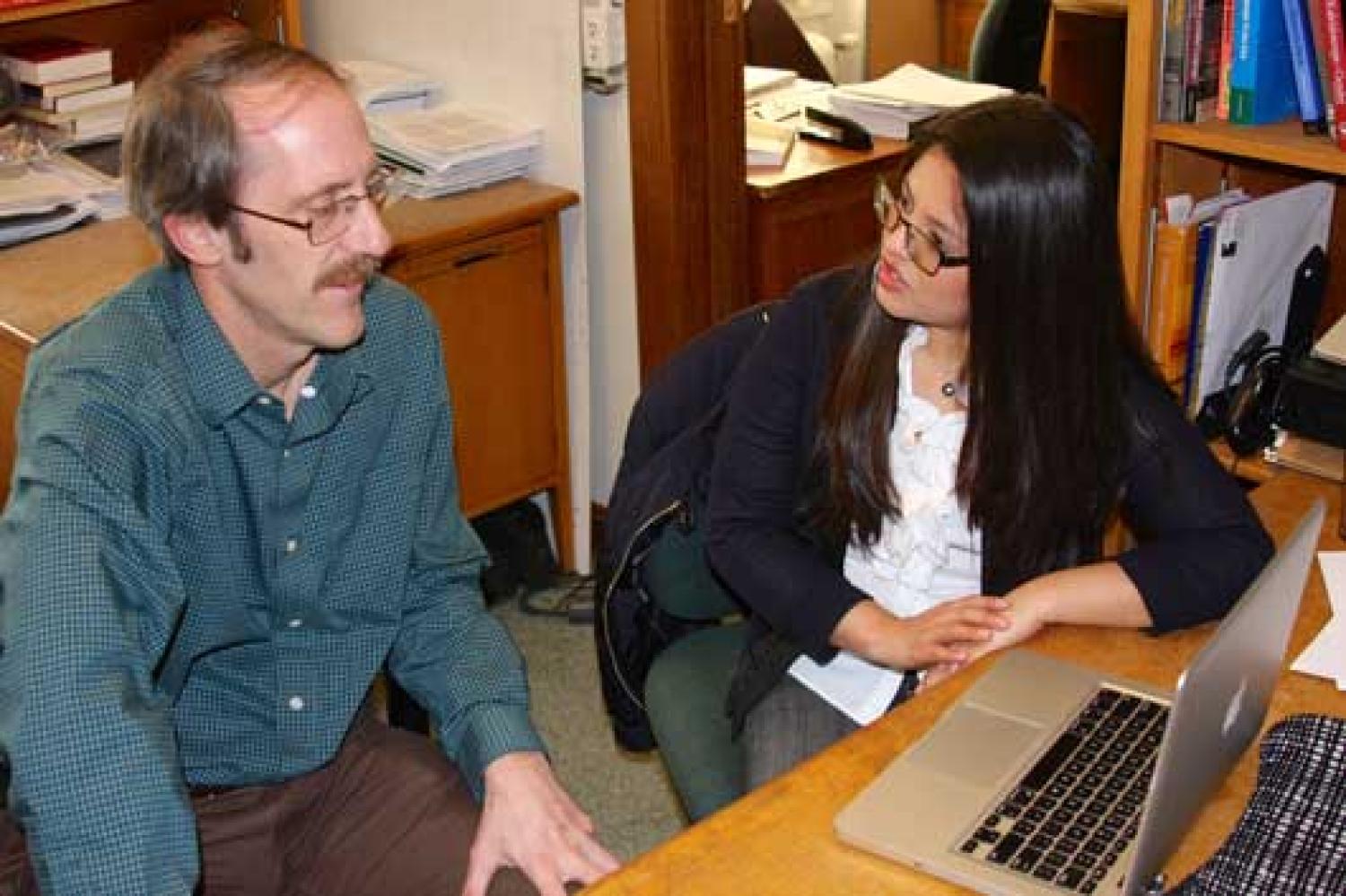 Linguistics Professor Andy Cowell discusses fieldwork with Jonnia Torres, a first-year graduate student in linguistics at CU-Boulder. She is among a team of students who are studying speakers of languages indigenous to Central America.

Funded in part by a private donor, University of Colorado Boulder linguistics graduate students are documenting Huichol and K’iche’ Maya, languages indigenous to Guatemala and Mexico—right here in Colorado.

“The inspiration for the project was the realization that there are so many immigrants from Mexico and Central America here,” Cowell said. He estimated that 200,000 such immigrants live along Colorado’s Front Range.

"It’s also extremely inexpensive research and a great way for graduate students to learn to do field work. If they need more data, following up is a lot easier than flying back to Guatemala.”

“Given’s Mexico’s incredible linguistic diversity and that 10 percent of the Meso-American immigrant population generally speak an indigenous language in addition to Spanish, the possibility of completing significant language documentation on relatively undocumented languages was too good to pass up,” Cowell said.

This opportunity comes at a time when student research in Mexico is more difficult, he said, especially since the university recently issued travel advisories against students’ traveling there.

“It’s also extremely inexpensive research and a great way for graduate students to learn to do field work. If they need more data, following up is a lot easier than flying back to Guatemala,” Cowell said.

“The coolest thing is that we’re just going to Greeley, and even in Boulder, we can find people who speak Maya,” Slobe said.

Slobe and Jones first met the K’iche’ Maya participants, two sisters and a brother, in January.

“We wanted to be respectful, to get to know them instead of just barging into a house with this recording equipment,” Torres said.

So, after first chatting in Spanish, Torres and Slobe encouraged them to speak in K’iche’ Maya for a while. The graduate students left with 45 minutes of recorded K’iche’ Maya conversation about the participants’ childhoods and lives in the United States.

“Not a lot of linguists have that kind of data, so it’s something very valuable,” Torres said.

Documenting K’iche’ Maya conversations will augment the comparative data, because what linguists know about conversation is based almost entirely on English.

Torres, Slobe, and Cowell will transcribe the recording using a K’iche’ Maya dictionary, one 10-minute audio segment at a time. Then they will work with the participants and use language software to translate it into Spanish.

Because K’iche’ Maya and Huichol are still being learned by children, they aren’t considered endangered.  K’iche’ Maya grammar is already fairly well documented, but “there’s not much data on actual dialogue and gestures, how you sit, how you determine who talks next,” Cowell said. So a crucial goal of this project is using a video camera to document not just individual words or phrases, but natural conversation.

“This should give them more insights into [Maya] speaking rules and cultural questions,” Cowell said.

Documenting K’iche’ Maya conversations will augment the comparative data, because what linguists know about conversation is based almost entirely on English.

“We don’t know if [conversation] actually works the same in other languages. Maybe conversation is the same everywhere, but we kind of doubt it,” he said.

This is an example of how investigating obscure languages can also lead to exciting, unexpected discoveries. Other possibilities include finding an unknown or rare language feature, which can in turn contribute to broader language theory.

Though it’s still early in their research, Torres is excited to learn more about her informants’ habit of code-switching, which describes how multilingual people often switch between languages, seemingly at random. Though speakers can’t always explain why they switch from one language to another at a certain point, further analysis could garner deeper insights into a language and its culture.

“Without knowing anything about K’iche’, though, we can’t make any claims to code-switching or its grammatical rules,” Torres said.

So even though the transcription process can be tedious, it is necessary, she said.

Cowell said many people showed interest in the project, but finding the right participants was tricky.

“We couldn’t work with undocumented participants, because they are paid through the CU system. Other volunteers were either not first language speakers or came here 20 years ago and lost a lot of the language,” he said.

It took some intermediary connections, including a mailman and a CU-graduate-store-owner, to connect Cowell and his students to the right speakers in the community.

Those speakers will also benefit from the project, Cowell said. While CU students will gain training in fieldwork and language transcription and documentation, participants receive compensation, along with affirmation and respect for their first language.

The researchers plan to create some language learning resources for the participants, including software and voice recordings, which will help their family stay connected to their language. Torres and Slobe also want to lend networking support for the family they’re working with by getting their cleaning business on the Internet.

Cowell would eventually like to find and work with a community of several Huichol or K’iche’ Maya-speaking families living in close proximity. “It is pretty common to have immigrant neighborhoods and networks like that,” he said.

Original art work that is part of the MFA exhibition that is the result of... END_OF_DOCUMENT_TOKEN_TO_BE_REPLACED

The Sutherland Bipolar Center has helped more than 2,100 Coloradans affected by bipolar disorder, regardless of their ability to pay. END_OF_DOCUMENT_TOKEN_TO_BE_REPLACED
Issue: Spring 2014
Return to the top of the page