Study of satellite imagery of the world at night, long used as an indication of the wealth of nations, is being refined with other data to give scientists a better picture of human and environmental well-being.

Gross Domestic Product and its cousin, GDP per capita, have long been the most widely accepted measures of national and human wellbeing around the globe. But for nearly as long, GDP and per-capita GDP have been seen as deeply flawed.

After all, GDP—a number representing the total amount of goods and services produced by a nation within a specified period of time—doesn’t distinguish spending on, say, education and cigarettes. Likewise GDP doesn’t measure anything without a market price attached and completely disregards the “informal economy” volunteering, household work, childcare, subsistence agriculture and more.

"Researchers are able develop ratios of data from nighttime satellite imagery to GDP and see where there are discrepancies. The satellite imagery tracks closely with broader measures of human wellbeing such as the so-called ‘happiness index and the U.N.’s Human Development Indicator.”

Another limitation: GDP measures total economic activity, but not the distribution of that activity, also referred to as “inequality.” That important distinction is currently at the center of political debate in the United States, as incomes disparity has widened significantly in recent decades.

Also, governments too often manipulate GDP, and methods of determining GDP vary widely around the globe.

“There is no standardized method of for gathering data (on GDP) throughout the world,” says Tilottama Ghosh, a research  associate at CU-Boulder’s Cooperative Institute for Research in the Environmental Sciences and co-author of “Using Nighttime Satellite Imagery as a Proxy Measure of Human Well-Being,” published in the November issue of Sustainability. 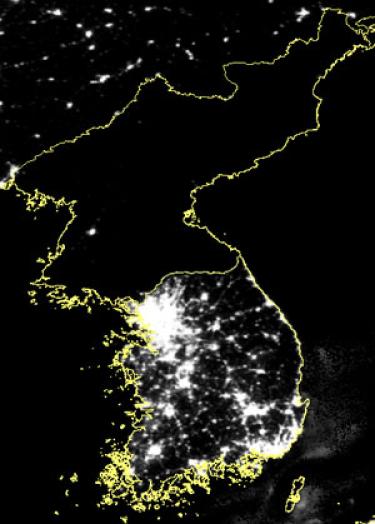 This iconic image of North and South Korea at night highlights the economic disparity between the two nations.

But Ghosh has been working with other researchers from the National Oceanic and Atmospheric Administration, the University of Denver and elsewhere to demonstrate that nighttime satellite imagery can serve as an effective proxy measure of human well-being.

Evaluating imagery from the U.S. Defense Meteorological Satellite Program, which goes back to 1992, and other sources, the research team starts with the general proposition that more lights on a satellite image—measured in pixels per square kilometer—correlate with higher levels of development.

Think of the famous photos from space showing North Korea to be almost a black hole while South Korea is ablaze with light. Or the comparison between a brightly lit Tokyo and the heart of Africa.

But the work is more refined than that. For example, the researchers are able develop ratios of data from nighttime satellite imagery to GDP and see where there are discrepancies.

The satellite imagery tracks closely with broader measures of human wellbeing such as the so-called “happiness index” and the U.N.’s Human Development Indicator.

“Our Night Light Development Index correlates strongly with the long-established metric of the HDI used by the United Nations that is based on multi-dimensional composite of things like GDP/capita, life expectancy, and average years of education per capita,” says Paul C. Sutton of the Department of Geography and the Environment at Denver University, one of Ghosh’s co-authors.

“These proxy measures are updated much more frequently,” Ghosh says.

Development is not without its consequences, however. Satellite imagery also shows what  Sutton calls an “ecological deficit.” In other words, zero pixels per square kilometer shine forth from the deepest Amazon, while crowded cities, with their attendant issues of pollution and resource depletion, blaze with light.

“The more developed countries of the world are taking more from the environment,” she says.

To date, a square kilometer has been about the highest resolution available to measure light output. But satellites of the National Polar Orbiting Partnership between NASA and NOAA have since 2011 provided higher resolution imagery.

“One of our main objectives is higher-resolution data, to be able to refine the measurements further. Once these data become available … we’ll have much superior quality for estimating socio-economic variables,” Ghosh says.

Original art work that is part of the MFA exhibition that is the result of... END_OF_DOCUMENT_TOKEN_TO_BE_REPLACED

The Sutherland Bipolar Center has helped more than 2,100 Coloradans affected by bipolar disorder, regardless of their ability to pay. END_OF_DOCUMENT_TOKEN_TO_BE_REPLACED
Issue: Spring 2014
Return to the top of the page