Since 1975, Fiske Planetarium has been the Johnny Appleseed of astronomy. Each year, 30,000 K-12 students and 4,000 University of Colorado Boulder students go there to take a front-row seat on the universe.

Soon, they’ll get a better, clearer and deeper view. And Fiske won’t be just for astronomy anymore. For now, however, Fiske is full of dust and darkness.

The campus is renovating the planetarium, retiring its analog star projector and upgrading to a powerful star plus video system paired with a high-definition screen capable of achieving nearly eight times more resolution than the standard HD television, completely surrounding the audience with a 360-degree view.

The improvements will allow students to see—and understand—more of the universe. With the naked eye, observers of the night sky see about 6,000 stars; with binoculars, about 20 million stars are visible. The new Fiske digital projector upgrades the planetarium sky by this same amount, allowing a significantly deeper view of the firmament.

Further, the new system will allow observers to “fly” through space, further enhancing their understanding of celestial bodies. Once installed, the state-of-the-art theater will be one of only five of its kind in the world (the other four are in New York, Chicago, China and Germany).

One of the biggest changes is that Fiske will be open to the public Saturdays and Sundays, playing a variety of “big screen” videos similar to what can be seen at IMAX theaters in Denver.

While Fiske is closed now, students shouldn’t be deterred from taking astronomy courses. Classes will meet in the planetarium in the beginning of fall semester, before the public opening.

“We intend to be fully operational sometime in the fall—and will be offering all of these various educational and public performances,” said John Stocke, professor of astrophysical and planetary sciences.

While the date of public openings aren’t yet certain, the planetarium staff should have opening dates announced by late summer, Stocke said.

Introductory-level astronomy classes typically have between two and seven planetarium visits during the term. These classes are generally for non-majors, and they are classes on both solar system and stars and galaxies.

Stocke teaches a class on ancient astronomies that meets every Thursday in Fiske. “It’s basically naked-eye astronomy,” plus related anthropology and archaeology such as calendars, eclipse predictions, ethnic cosmologies.

While the Fiske team learns the ropes on the new star projector this fall, Stocke plans to begin teaching his courses simple celestial motions, eclipses and the like. As the semester goes on, that class will see more-elaborate presentations.

Other classes, which tend to be taken by non-majors, visit Fiske two or three times a semester. These presentations use “dramatic visuals to introduce students to the solar system, with, for instance, “fly-throughs” visually similar to those seen by K-12 students but with more-advanced material.

The visualizations at Fiske allowed him to “go” anywhere on the Earth and see the stars. “The lights just came on—wow.”

Although Fiske is a university facility, it puts on educational star shows for 30,000 K-12 students a year.

“They come from as far as Grand Junction and all corners of Colorado,” said Francisco Salas, operations and program manager at Fiske. Programs for K-12 students are also produced in Spanish.

The new system will yield other educational advantages, Salas and Stocke said. It will enable the Fiske crew to display how planets looked from Earth in the past. The retiring system could not adequately show how the sky looked at a particular point in history, “particularly the positions of the planets at earlier times,” Stocke said. 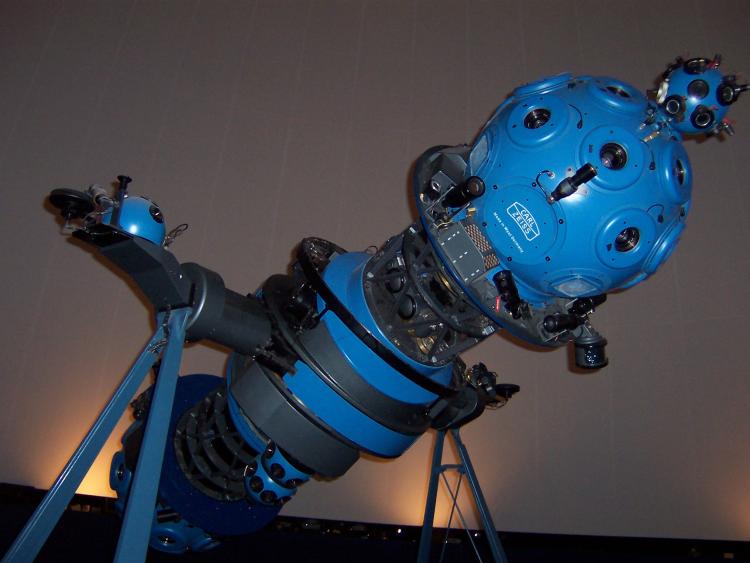 Fiske Planetarium’s analog star projector—called “Fritz” after its West German installer—is being retired after being in service since 1975. As part of the planetarium’s renovation, a new and more-powerful digital projector is being installed, along with a high-definition screen. The improvements will allow the planetarium to improve the material shown to students and to add a new line of entertainment options at the theater.

The reason is that the old star projector system—called “Fritz” after the West German technician who installed it—moves via an elaborate system of gears. To show a particular point in history, Fiske would have to run “Fritz” backwards.

That task has been done, for instance, to illustrate the “Star of Bethlehem,” which Stocke discusses in the ancient astronomy class.

“I use a laptop computer planetarium program to show that a potential candidate for the Star of Bethlehem is a very close conjunction of Venus and Jupiter, so close that they overlapped as a single image.”

“We couldn’t do that with Fritz,” Stocke said. “In fact, to set things up to do an approximation of that, we had to take the system off-line after a certain date in November so that the staff could run the projector back to a position that was relatively close (about 1962).”

“But this then meant that every presentation I made after that time in the semester, I could not show the planets, because they would not be in the right place. The new system will be able to do this trivially.”

Now, Fiske hires about 25 students to help run the planetarium. With the new system, that number will rise by a dozen or more because of increased video production and larger expected audiences.

“We have the best jobs on campus for film students and future science teachers,” said Fiske Director Doug Duncan. “The film students may make the next ‘Avatar’ or a future documentary, but right now, they are designing shows for Fiske, building images of what newly discovered planets would look like if you could see them up close.”

The planetarium’s staff is eager to host K-12 students. “These are the students who might become CU students in the future.”

Fiske will be offering Saturday and Sunday shows as a movie-theater style venue, and presentations, largely movies, will be shown to students and the general public.

“We expect Fiske to become a weekend destination for families and individuals, like the Denver museum but closer,” said Duncan. “We are forming a film board, kind of like a film festival, to choose what programs to bring to Boulder.”

Stocke added: “I’m not saying we want to compete with Twenty Ninth Street, but we may want to run movies that are a little more affordable and … look good on a big screen and in a wonderful sound environment.”

The popular weekend-night laser shows—like “Laser Floyd”—will continue to be shown, but on an upgraded laser system. Fiske is the only venue in Colorado that does laser shows. “There’s something about seeing Pink Floyd with lasers,” Salas said.

Meanwhile, “Fritz” the star-projector will neither be gone nor forgotten. “Fritz” will remain on display in the planetarium.

The use of geared mechanisms to represent the movements of planets and stars dates back to about 200 B.C.E. “So it has this huge, long tradition,” Stocke said. And “Fritz” is the penultimate geared analog device for replicating the motions and positions of things in the sky.

Though the new Fiske Planetarium has multiple public uses, private funds are needed. Hewlett Packard donated the powerful computers that enable video production. Naming rights to the star theater are up for grabs.

For more information on Fiske and its renovation, see http://fiske.colorado.edu.

Original art work that is part of the MFA exhibition that is the result of... END_OF_DOCUMENT_TOKEN_TO_BE_REPLACED

The Sutherland Bipolar Center has helped more than 2,100 Coloradans affected by bipolar disorder, regardless of their ability to pay. END_OF_DOCUMENT_TOKEN_TO_BE_REPLACED
Issue: Summer 2013
Return to the top of the page