This video, posted on YouTube, captures a CU student perspective of the Telluride University Seminar at the Telluride Film Festival. This video was created by CU student William Jones, with contributions from student Stephen Kuhn.

For the second year running, some University of Colorado students have gotten a front-row lesson in film and life at the Telluride Film Festival.

Now, an educational program started by an instructor at CU’s Libby Arts Residential Academic Program has become a formal seminar for university students who watch and learn from some of the brightest lights in film.

Here’s how The New York Times described the Labor Day scene this year:

“For four days, we’re all hanging out watching movies and comparing notes on them. You, me, my teenage son, the visiting film students with wide eyes and orange badges, the nice couple from Tuscon, Werner Herzog, George Clooney, Glenn Close … .”

Some of those wide-eyed students, many of them film majors, are members of CU’s Libby Arts Residential Academic Program, a “living and learning community” for students interested in visual and performing arts. Students say it was, in several respects, a peak experience.

At the foot of the spectacular San Juan mountains, students fraternized with Clooney, learned from acclaimed theatre director Peter Sellars and discussed film with actress Tilda Swinton, who stars in “We need to Talk About Kevin,” a riveting tale of the mother of a teenage boy who went on a high-school murder spree.

“Going to Telluride was one of the most special moments of my college experience thus far,” said Lily Grisafi, a junior in film studies. “I have never been in an environment so immersed in film, and I learned more about film theory and the execution of that theory in one weekend then I could have learned by watching 10 times the number of films on my own.”

The excursion was the idea of Janet Robinson, Libby’s associate director and an instructor in the program. When she joined Libby’s staff, she started making strides toward the field trip. 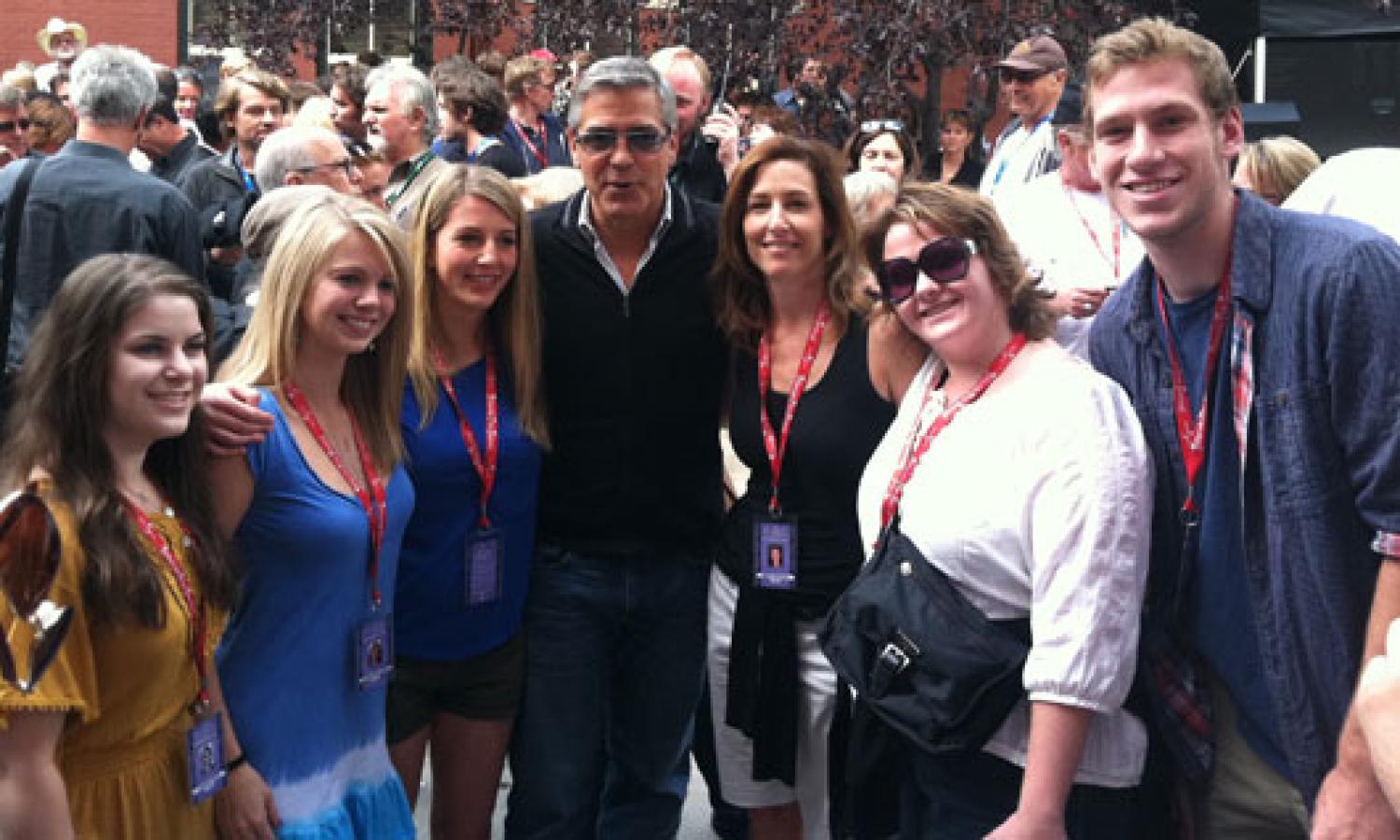 Two years ago, Robinson attended the festival alone “to get the lay of the land.” She spoke with the festival’s education director, Kate Sibley, who agreed to set up a two-hour Friday-afternoon session, arranged especially for the CU students, led by notable filmmakers or actors.

Robinson garnered the support of Deborah Haynes, professor of art and art history and director of the Libby program. Haynes helped fund the trip, and Robinson spent much of the next year preparing, starting with the basic issue of securing lodging. Michael Shernick, Libby program assistant, provided “invaluable” help.

This year, LRAP’s new director Eric Stade offered continued support for the trip. Robinson and her students took the journey again, but this time she took “junior leaders,” CU students who attended last year and who helped guide new attendees. Also this year, the film festival created a formal seminar for university students, the Telluride University Seminar. That seminar also drew students from the University of California, Santa Barbara, and UCLA.

This year, Robinson and her students took the journey again, but this time she took “junior leaders,” CU students who attended last year and who helped guide new attendees. Also this year, the film festival created a formal seminar for university students. That seminar also drew students from the University of California, Santa Barbara, and UCLA.

And this year, like last year, the students of CU’s Libby RAP loved it.

Attending the festival “was one of the most amazing experiences of my life,” said Jake Dwyre, a freshman in film studies. “It truly opened my eyes and reminded me why I love film. … I am so thankful to Janet, the junior leaders, and Libby RAP for giving me this opportunity of a lifetime.”

“Telluride was a mind-blowing experience,” said Jamie Konitzer, a sophomore in film studies. “It gave me renewed motivation to do what I have always loved: make movies.”

Attending the festival helps students realize that “cinema is not just George Clooney,” she added. Clooney flew from Venice to Telluride, where he was on hand for the screening of “The Descendants,” which tops some critics’ list of Oscar predictions.

“People give over their whole lives to this. I think there is a life message that you get out of something what you put into it.”

Even the teacher found the experience instructive. One of the featured films included a painstakingly restored version of Georges Méliès’ 1902 classic “Le Voyage dans la Lune”  (“A Trip to the Moon”).

Robinson has been teaching this film for years. “Seeing the restored version of ‘Trip to the Moon’ under the stars at Telluride’s outdoor venue was incomparable to the old scratched VHS copy; I could finally appreciate Méliès’ genius.”

Original art work that is part of the MFA exhibition that is the result of... END_OF_DOCUMENT_TOKEN_TO_BE_REPLACED

The Sutherland Bipolar Center has helped more than 2,100 Coloradans affected by bipolar disorder, regardless of their ability to pay. END_OF_DOCUMENT_TOKEN_TO_BE_REPLACED
Issue: Winter 2011
Return to the top of the page