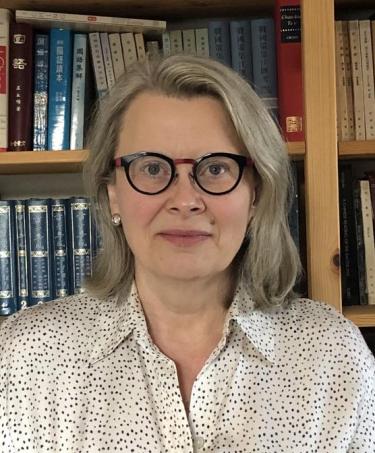 First trained in English and Germanic Studies at Friedrich Schiller University, Jena (East Germany), Antje embarked on a second career in Chinese Studies, Japanese Studies, and Chinese Art and Archaeology at Ludwig Maximilians University in Munich in 1989. After her doctorate in 1998, she taught at Christian Albrechts University in Kiel (where she habilitated in 2004) and Albert Ludwigs University Freiburg. In 2007, she joined the faculty of ALC at the University of Colorado at Boulder.

Antje is the author of a monograph on notions of sleep in early Chinese literature (2001, in German) and of the book Letter Writing and Epistolary Culture in Early Medieval China (Seattle: Univ. of Washington Pr., 2013). She also edited a conference volume, A History of Chinese Letters and Epistolary Culture (Leiden: Brill, 2015), and is co-editor of three earlier conference volumes (in German). Antje has published articles on aspects of Chinese literature, medicine, and art in Monumenta Serica, Early Medieval China, Journal of the American Oriental Society, Asia Major, T’oung Pao, and other venues.