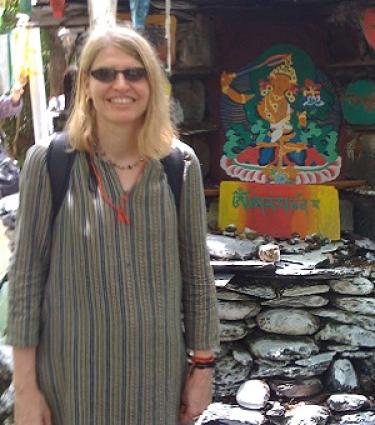 Loriliai Biernacki (Ph.D., University of Pennsylvania) is Professor of Religious Studies at the University of Colorado at Boulder. Her research interests include Hinduism, the interface between religion and science, and gender. Her first book, Renowned Goddess of Desire: Women, Sex and Speech in Tantra (Oxford, 2007) won the Kayden Award in 2008. She is co-editor of God’s Body: Panentheism Across World Religions (Oxford University Press, 2013). Her study of the 11th century Indian philosopher Abhinavagupta, The Matter of Wonder: Abhinavagupta’s Panentheism and New Materialism, is forthcoming from Oxford University Press in 2023. It addresses the 11th century Indian philosopher Abhinavagupta's notions of selfhood, body, and cosmology. She is also currently working on the interstices between religion, science and panentheism.

Loriliai Biernacki grew up in the deep rural South, in Louisiana , imbibing the hot humid summers full of lazy afternoons swimming in the creeks amidst the local alligators. How she made it to study on the East coast is a wonder, since neither she, nor anyone she knew, actually realized that it was possible to go to any other college than LSU or Southeastern University in Hammond, Louisiana until her senior year in high school when a mysterious recruiter for Princeton offered her the opportunity to skip out on a math test. She received her Bachelor's degree in English from Princeton University, where she studied creative writing, with an emphasis in poetry. She still enjoys poetry and once received honorable mention in a national poetry contest for a poem on her take on Indian philosophy, titled "Dvaita." Emboldened by the relish of Indian food, with such a wondrous plethora of vegetarian variety, her Ph.D. from the University of Pennsylvania brought her to new and foreign shores as she studied the 11th century Indian Tantric thinker Abhinavagupta.