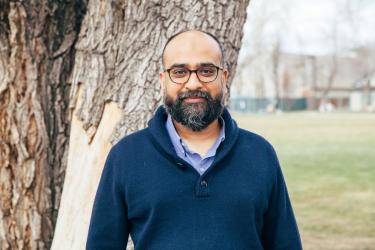 Aun Hasan Ali joined the Department of Religious Studies in 2015. He works on the Islamic tradition. Ali studied Religion and Philosophy at Rutgers University, receiving his BA in 2003. That same year he travelled to Yemen to continue studying Arabic. He earned an MA in Islamic Studies from McGill University in 2007, and will receive his PhD in Islamic Studies from McGill University in 2015. Ali's research focuses on the intellectual history of Shi'ism, including both the pre-modern and modern periods. In particular, he is interested in studying Shi'ism through the lens of the concept of tradition and social network theory. Ali is also interested in Shi'i law and legal theory, especially the interplay between shariah and legislation. His current project examines intellectual life in the city of Hillah in southern Iraq in the twelfth and thirteenth centuries CE. Ali is also preparing the final draft of an article in which he examines the relationship between Sunnism and Shi'ism through the lens of the issue of documentary evidence in Islamic law. His recent publications include a translation of a Persian chapter about the Qajar philosopher Abu'l-Hasan Jilveh in Philosophical traditions in Qajar Iran, set to be published by Brill in 2015, and two articles on Shi'i legal theory, classical and modern, in The Oxford Encyclopedia of Islam and Law.

Aun Hasan Ali joined the Department of Religious Studies in 2015. He received his PhD from McGill University’s Institute of Islamic Studies. His research focuses on the intellectual history of Twelver Shi’ism, particularly law and legal theory. His first book, The School of Hillah and the Formation of Twelver Shi’i Islamic Tradition, builds upon recent scholarship in the fields of Religious Studies and Anthropology to argue that Twelver Shi'ism is better understood as a discursive tradition. At CU Boulder, Ali teaches Religious Dimensions of Human Experience, Islam, The Quran, Sufism, and Fundamentalisms. In addition to intellectual history, he maintains an interest in Urdu and Persian literature.