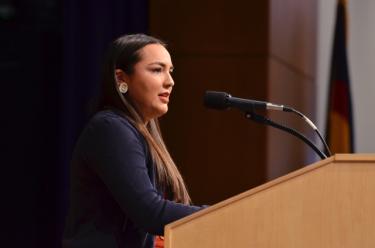 When Geneiveve Schneider and Sasha Strong graduated from Front Range Community College, the two of them were just strangers in the same graduating class. Years later, however, the CU transfer students met and realized just how much they hold in common. Both women are mothers, political science majors, and as of May 2016, recipients of the Jacob Van Ek Award.

The Jacob Van Ek Award recognizes students with a high academic standing who have contributed to the CU campus and their community. For the 2015 – 2016 academic year, Strong and Schneider were the two award recipients chosen from the political science department. Today, they still do their best to keep in touch.

“Whenever we see each other, we sit down and catch up,” Schneider said. Schneider was recognized for making a difference and getting involved in local politics.

“I was a city council member for Dacono,” she said. “I didn’t run for reelection, mainly because I wanted to give more to school, but I am still involved with the city.”

She is currently on the city’s police committee, where her job is to resolve potential conflicts between officers and citizens. She also ran a campaign in the last election cycle for the city to pass a lodging tax.

Schneider didn’t even know she was in the running for the award until she received an email notifying her that she’d won.

“The first thing I did was call my husband and my mother,” she said. “Without [their] help, I couldn’t even be active in school or politics.”

Co-recipient Sasha Strong had a similar experience when she first heard the good news.

“I immediately told my mother and my boyfriend,” said Strong. “It was actually my birthday when I received the email, so I was so happy! It was the best birthday gift I could have asked for.”

Strong won the award after joining the Dean of Arts & Sciences Advisory Board, where she serves as a voice for minority students. In the community, she is a member of the Boulder County Head Start Policy Council and plays a role on the organization’s budget committee.

“[This award] solidified that my hard work was recognized on a campus-wide level,” she said. “It’s motivating to continue to succeed academically and personally.”

As she looks to the future, Strong hopes to represent Native American families through litigation and run for public office.

“I am an enrolled member of the Red Lake Band of Chippewa Indians in northern Minnesota,” she said. “Having seen a lot of the social injustices that occur on my reservation, I want to use my education to help marginalized communities.”