In 1926, by an enactment of Congress, the Naval Reserve Officer Training Corps program was established and units set up at the University of California, Georgia School of Technology, Harvard University, Northwestern University, University of Washington, and Yale University. Units were added as a need for them arose, and by the beginning of 1941 there were a total of 19 units. With the inauguration of selective service and other programs to insure the security of the country, eight more units were added to include the University of Colorado program.

Though the Unit was inaugurated on the campus of the University of Colorado in the summer of 1941, the Navy could trace its lineage on campus to Company "M" of the short-lived ROTC establishment which was founded at the University in early 1918 (pursuant to an Act of Congress of 1916) and was disbanded following the cessation of hostilities in November of that year. Of the six companies which comprised the ROTC establishment at that time, Company "M", 66 men strong, was designated the "Gob" Company and wore the Navy blue. When the darkening war clouds of early 1941 became progressively more threatening, the Navy decided to expand its NROTC program to include many of the principal educational institutions of the country, and in so doing established a 100 student Naval ROTC Unit at Colorado charged with producing reserve officers for the naval service. By this action the Navy was the first of the armed services to be permanently established on the campus of the University of Colorado. Thus, when the 7 December 1941 attack on Pearl Harbor came, and with it the advent of war, the NROTC Unit at Colorado was an established functioning unit. 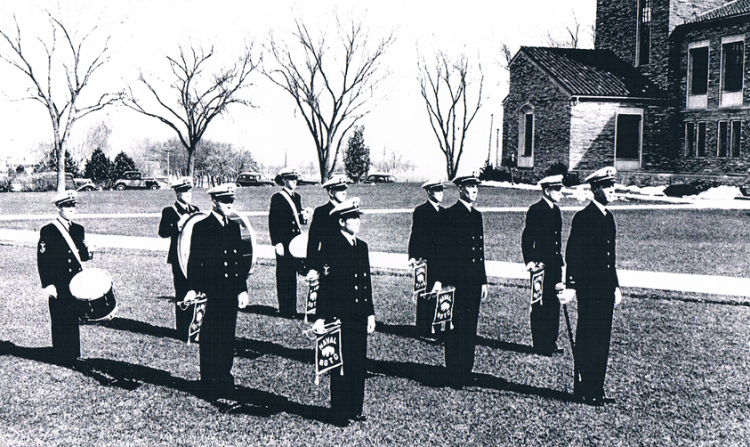 On September 20, 1946 the Naval ROTC returned to a peacetime basis, with the various wartime programs being discontinued, leaving only the original NROTC Contract Program. At that time the Unit consisted of two-hundred and forty prospective officers. With the advent of peace, the Navy was still faced with the problem of providing career officers and reserve officers for a greatly expanded "Cold War" Navy. In Washington, consideration was given to an expanded or a second Naval Academy. In 1946 both plans were rejected in favor of a proposal put forth as part of the "Holloway Plan". Under this plan, permanent Naval ROTC Units were established at 52 selected colleges and universities. Through a competitive system of examination throughout the country, the cream of the nation's male high    school graduates would be selected to attend these institutions under a government subsidy for their four years of undergraduate study and, upon graduation, would receive commissions in the regular Navy or Marine Corps. This plan provided the naval service with a broad base of new career officers, each with a unique education. At the same time, it supplemented the output of the Naval Academy. Together the two sources provided an officer corps for the naval service with the diverse abilities and backgrounds so desirable for the nuclear-age Navy. The University of Colorado was one of the 52 educational institutions selected to participate in the new Regular Naval ROTC Program.

The University was expanding and the Unit kept pace. By 1956 the Folsom Stadium was built, and this Unit moved from its rather cramped original spaces in the basement of Ketchum Building to its current spaces which include the Battalion Office (the armory and quarterdeck). A significant milestone in the history of the Navy at the University of Colorado occurred in June of 1959. At that time the Unit and the University were pleased to welcome a native son of Boulder, Colorado, Admiral Arleigh Burke, the Chief of Naval Operations. Admiral Burke was awarded the degree of Doctor of Science by the University, and, while on campus, commissioned 31 new officers in the Navy, Marine Corps, and Nurse Corps. 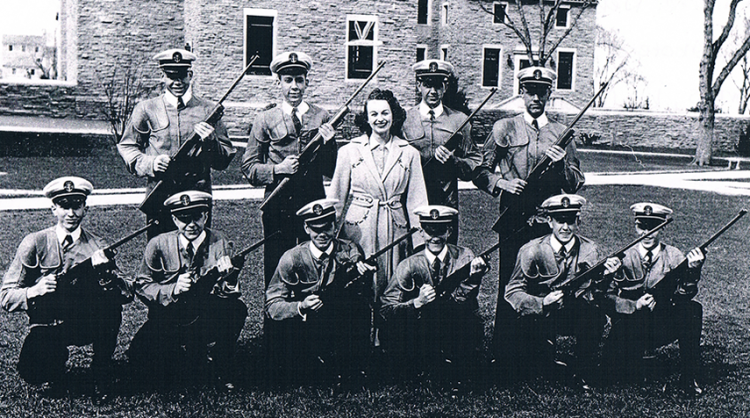 The story of the Navy at the University of Colorado would not be complete, however, were it to end here; for there were and are people involved in this story. People who have been more than names in a skeletal history; people who have been the blood of the various programs; put life into them, given them zest and vigor and meaning. In early 1942, when the country was still recovering from the shock of Pearl Harbor, the midshipman battalion, after two days of accelerated drilling, marched from the campus into downtown Boulder and back again, ostensibly, to demonstrate their drill prowess; but more important, to show tangibly that America was on the move; that the giant was awakening and starting to develop its muscles. Shortly after that first display, on March 22, the battalion marched in parade in downtown Denver. Since those early days, the battalion has formed from within itself a Drill Team, highly skilled and polished through long hours of practice. Over the years the Drill Team performed at many University of Colorado events, including the 1957 Orange Bowl festivities.

People have added zest and life to the Navy story at Colorado in other ways, too. From the very beginning, in 1941-42, "Navy" men and women loosed pent up energy and spirit in athletics and sportsmanship. NROTC Unit teams had won championships in water polo, touch football, softball and volleyball; and Unit rifle and pistol teams had been consistently at or near the top of the ladder in local, regional and national competition since its inception in 1949.
It takes more than rifle competitions, athletics and marching midshipmen, however, to make a strong, proud organization; a cohesive spirited unit: there must also be social life, communication, and community involvement. The NROTC program at the University of Colorado has a great history of this cohesive spirit and by looking at our past, we can only hope to maintain the high standards and learn from those who came before us.