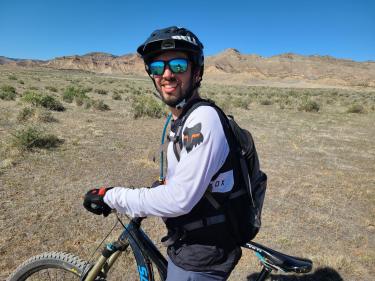 Nicholas Kellaris (MatSci’20) is the Director of Research at Artimus Robotics, where he focuses on studying and improving electrohydraulic actuators—devices that convert stimulus into movement—and conducts research into the materials systems from which they are built.

Kellaris formed the company with his fellow graduate students and his advisor, then-Assistant Professor Christoph Keplinger, formerly of the Paul M. Rady Department of Mechanical Engineering.

“The focus of the company is to transition the electrohydraulic actuator technology developed in the Keplinger lab to commercial applications in a variety of fields,” Kellaris said. “We very much figured it out as we were going—mistakes and all—taking advantage of the fantastic resources at CU and in the city of Boulder that help foster startups.”

Kellaris joined the Materials Science and Engineering program in 2015. He was attracted to the program’s flexibility and freedom, and saw his background in physics as a natural fit.

“I see materials science and engineering as a way to apply physics to real-world problems in a variety of fields, which is what makes it so interesting,” he said. “It can range from studying new perovskite structures for solar cells to making transparent concrete.”

As a student in the Keplinger Research Group, Kellaris worked with a new class of soft electrostatic actuators called HASEL actuators. Kellaris helped design and model these devices, which led to the formation of Artimus Robotics.

The adaptability of the Keplinger Research Group provided a unique educational experience.

“We employed whatever tools were needed to solve research problems,” he said. “This involved research into manufacturing, robotic design, the fundamentals of dielectric properties and more. It also involved plenty of collaboration with labs at CU Boulder and elsewhere, drawing in talented researchers who were able to develop control circuits and theories for our actuators, design custom materials, and work with us to explore applications such as biomedical devices, including powered prostheses.”

As an MSE student, Kellaris a great degree of freedom.

“It allowed me to get access to different lab spaces that had equipment that I needed, and helped me sign up for the classes I wanted,” he said. “The close-knit nature of the program meant that the MSE affiliates were always willing to go above and beyond for me. Both Chris Bowman and Bob McLeod were so dedicated as directors of the program.”

The unique circumstances of being in a young program studying under a new faculty member helped shape his experience.

“Being the first set of students in our research group gave me and my coworkers an amount of agency that I think is unique compared to most graduate students,” he said. “We were able to build the lab from the ground up. The memories of the early days of the lab, where we had to be scrappy to get research done with almost no funding, are definitely special to me. It also made me really close to my coworkers from that time.”

Kellaris credits his mother’s scientific and academic career for providing an example to follow—and to shake things up.

“She runs a nonprofit that aims to reshape academia, and focuses in part on inequalities in graduate education and the sometimes dismal outlook for PhD graduates in terms of job prospects after their studies,” he said. “Somehow, that didn't deter me. Part of my motivation for joining academia was to work towards a research environment that fights against the discrimination and sexism that she had to deal with for so many years.”

To students beginning their time in the program, Kellaris offers some advice.

“Take time for yourself and non-work activities, including your relationships,” he said. “If you allow yourself to work until you've finished your to-do list, you'll never stop. It took me a long time to realize that you can't—or at least shouldn't—complete a PhD that way. The MSE program is great for those who want the freedom to explore their interests, but you need to be intentional about finding your place within it— both socially and academically.”