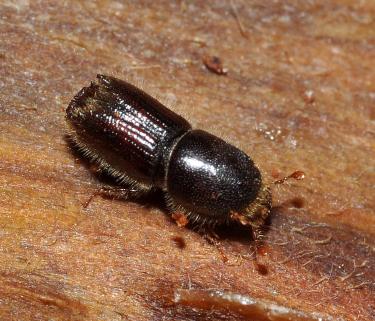 Over the past decade the Mountain Pine Beetle (Dendrocthonus ponderosae) has killed millions of pine trees from New Mexico to the Yukon Territory, as a result of an unprecedented explosion in their numbers.  The causes behind the beetle outbreak has been the topic of research by numerous ecologists.  Possible causes have focused primarily on climate change induced stress on the trees, rendering them more susceptible to attack, as well as lower winter mortality in the larval stages of the beetle.  However changes in the beetles lifestyle may be an important contributor as well.

CU biologists Jeff Mitton and Scott Ferrenberg have studied the life cycle and activities of the mountain pine beetle, and they report, for the first time, that the mountain pine beetle is changing from reproducing once per year to twice per year. This increase in the production of beetles provides insight into the cause of the exponential increase in their numbers.  The mountain pine beetle is recognized as the most destructive of western forest insects, but the magnitude of this epidemic is already ten times larger than the greatest epidemic previously recorded. The beetles can kill many species of pines, but the current outbreak is mainly in lodgepole pine.

Mitton and Ferrenberg’s primary beetle study site is at an elevation of 10,000 feet at the Mountain Research Station.  An adjacent long-term meteorological site (C1) documented that temperatures have been increasing over the last four decades, particularly in spring. In response to warmer temperatures, mountain pine beetles start their flight season more than a month earlier than historically reported, and fly more than twice as long. When adult beetles emerge from a tree in late spring, they search for a living pine tree, attack "en masse" and kill it, start excavating egg galleries within a day, and lay eggs within a few days. Those early eggs, driven by warm temperatures, develop more quickly through the summer to produce adults that emerge in August. This summer generation has never been reported for this species of beetle.

Previous studies reported that in response to warmer temperatures, the mountain pine beetle has substantially increased its geographic range, killing trees 450 miles further north in Canada and 2,000 feet higher in elevation in the Rocky Mountains.