Below are some of the creative and critical research being conducted by RAP Lab members or in the RAP Lab itself.

The purpose of this study is to explore how critical race scholars across Primarily White Institutions in Colorado experience, grapple with, and mitigate the impact of the recent attempted ban or climate against critical race theory and how they foster and nurture their socio-emotional and intellectual wellbeing. Participation will include a semi-structured interview and a survey on microaggressions.

If you are interested a please provide your name, email and University affiliation. We will contact you to schedule an interview and survey.

If you have any questions, contact the PI's Marlene Palomar (marlene.palomar@colorado.edu) and/or  Abraham Jones (Abraham.Salvador-jones@colorado.edu) or fill out this form and we will reach out 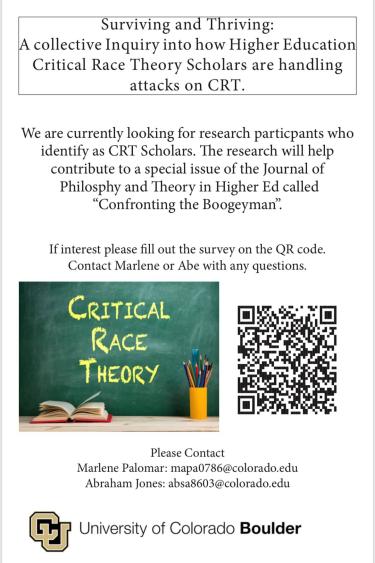 The Lullaby Project, which started at Carnegie Hall in New York City, pairs new and expectant parents and guardians with artists to write and sing personal lullabies for their babies. Researchers and musicians brought it to Colorado to connect participants across the state and study the effects of the project on the mental health and well being of children and parents.

“We wanted to address difficulties with mental health, social connection and loneliness and provide an experience that can be joyful and meaningful for parents,” said Anne Frtizson, a graduate student in the Department of Psychology and Neuroscience and Renée Crown Wellness Institute who wrote about The Lullaby Project for her master’s thesis.

To read more about it clink on this link or email Anne Fritzson (Anne.Fritzson@Colorado.edu)

His Master's thesis, "I AM JUST A RAPPER: A Lyrical and Cultural Analysis of Childish Gambino's Rise from Outcast to King," argues that by fulfilling his lyrical prophecies, Childish Gambino becomes Plato’s philosopher king: a leader proving his claim to the throne through his weaponization of intelligence, philosophy, and guardianship. To conduct this analysis, his thesis first presents a summary of the Black male rapper archetype to give the proper historical, critical, and cultural contexts in which Gambino’s work can usefully be analyzed. Second, it connects Alexander's research to prior scholarship on African American studies, hauntology, Romanticism, Black Marxism, and trauma theory. The last piece of Alexander's methodology is using Gambino’s lyrics as poetic support to illustrate how his ascension to philosopher king is a transcendent contemporary moment of resistance against the resurgence of white nationalism under the banner of Trumpism and a triumphant model of Black reclamation in the age of Black Lives Matter and police militarization.

Book of Rhymes: The Poetics of Hip Hop

If asked to list the greatest innovators of modern American poetry, few of us would think to include Jay-Z or Eminem in their number. And yet hip hop is the source of some of the most exciting developments in verse today. The media uproar in response to its controversial lyrical content has obscured hip hop's revolution of poetic craft and experience: Only in rap music can the beat of a song render poetic meter audible, allowing an MC's wordplay to move a club-full of eager listeners.

Examining rap history's most memorable lyricists and their inimitable techniques, literary scholar Adam Bradley argues that we must understand rap as poetry or miss the vanguard of poetry today. Book of Rhymes explores America's least understood poets, unpacking their surprisingly complex craft, and according rap poetry the respect it deserves.

The Anthology of Rap

From the school yards of the South Bronx to the tops of the Billboard charts, rap has emerged as one of the most influential musical and cultural forces of our time. In The Anthology of Rap, editors Adam Bradley and Andrew DuBois explore rap as a literary form, demonstrating that rap is also a wide-reaching and vital poetic tradition born of beats and rhymes.

This pioneering anthology brings together more than three hundred rap and hip-hop lyrics written over thirty years, from the “old school” to the “golden age” to the present day. Rather than aim for encyclopedic coverage, Bradley and DuBois render through examples the richness and diversity of rap’s poetic tradition. They feature both classic lyrics that helped define the genre, including Grandmaster Flash & the Furious Five’s “The Message” and Eric B. & Rakim’s “Microphone Fiend,” as well as lesser-known gems like Blackalicious’s “Alphabet Aerobics” and Jean Grae’s “Hater’s Anthem.”

Both a fan’s guide and a resource for the uninitiated, The Anthology of Rap showcases the inventiveness and vitality of rap’s lyrical art. The volume also features an overview of rap poetics and the forces that shaped each period in rap’s historical development, as well as a foreword by Henry Louis Gates, Jr., and afterwords by Chuck D and Common. Enter the Anthology to experience the full range of rap’s artistry and discover a rich poetic tradition hiding in plain sight.

One Day It’ll All Make Sense

Common holds nothing back in this gripping memoir, both provocative and funny. He tells what it was like for a boy with big dreams growing up on the South Side of Chicago. He reveals how he almost quit rapping after his first album sold only two thousand copies. He recounts his rise to stardom and talks about the challenges of balancing fame, love, and family. Through it all, Common emerges as a man in full. Rapper. Actor. Activist. But also father, son, and friend. His story offers a living example of how, no matter what you’ve gone through, one day it’ll all make sense.

Three Days Before the Shooting...

Ellison began work on his untitled second novel around 1954, following the publication of Invisible Man, but was devastated when part of the original manuscript was destroyed by a fire in 1967. Ellison published eight excerpts from the novel during his lifetime, including an excerpt called "Juneteenth" in the Quarterly Review of Literature in 1965 and the story "Cadillac Flambé," published in American Review in 1973. However, although he had written over 2,000 pages by the time of his death, Ellison never finished the novel.

According to John F. Callahan, a professor who had become close friends with Ellison after writing an article about Invisible Man, Ellison was so discouraged by the thought of his own death that he never discussed his literary executorship. Shortly after Ellison's death, his widow appointed Callahan as his literary executor. Callahan was overwhelmed by the amount of notes, computer disks, and manuscript pages that Ellison had left behind. Ellison's readers were eager to see what Ellison had written, but Callahan needed time to sort through the manuscript and find a way to make it publishable. After several years of work, and with the co-editing of Adam Bradley, Callahan and Bradley released the manuscript under the title Three Days Before the Shooting.

The plot of Three Days Before the Shooting revolves around a man named Bliss, of indeterminate race, who is raised by a black Baptist minister named Alonzo Hickman. As an adult Bliss assumes a white identity and eventually becomes a race-baiting United States Senator named Adam Sunraider.

The Poetry of Pop

Encompassing a century of recorded music, this pathbreaking book reveals the poetic artistry of popular songs. Pop songs are music first, but they also comprise the most widely disseminated poetic expression of our time. Adam Bradley traces the song lyric across musical genres from early twentieth-century Delta blues to mid-century rock 'n’ roll to today’s hits. In his text, Bradley illuminates of popular songs are united in their exacting attention to the craft of language and sound and that pop music is a poetry that must be heard more than read, uncovering the rhythms, rhymes, and metaphors expressed in the singing voice. At once a work of musical interpretation, cultural analysis, literary criticism, and personal storytelling, this book illustrates how words and music come together to produce compelling poetry, often where we least expect it.

You can view Dr. Bradley's website and purchase his books below:
http://www.adamfbradley.com/home/