How can wood houses be built to withstand future hurricanes?

In Puerto Rico, a U.S. Caribbean island exposed to both hurricanes and earthquakes, it is estimated that over half of all commercial and residential construction is constructed informally. While this informally constructed housing provides housing access for individuals who have low incomes, are unable to secure land tenure, or are otherwise unable or unwilling to go through formal housing construction processes, this housing may present safety risks in hazard-prone regions such as the Caribbean. Understanding this context, our study examines and prioritizes modifications based on available resources to reduce the likelihood of wood-frame housing damage and destruction in future hurricane wind events in Puerto Rico.

We conducted interviews with engineers, architects, builders, and homeowners across Puerto Rico to compile a list of housing design characteristics to reflect the variations present in Puerto Rico’s informally constructed housing. We started by establishing four main housing types: three wood-frame houses, including one-story houses with hip and gable roofs and a two-story house with a gable roof, and one reinforced concrete and masonry house with a gable roof. We assumed the roofs consisted of wooden truss members and corrugated metal panels for all houses, reflecting common construction practices. We considered the effect of modifications in the roof panel gauge and shape, fastener type and spacing, connections between purlins, trusses and walls, truss and purlin spacing, material deterioration, wall bracing in the wood-frame houses, and reinforcement in the concrete/masonry houses. Then, for each of these four general types of houses, we determined the wind speed at which roof failure occurred.  This wind speed is quantified using 3-second wind speeds and represents, probabilistically, the wind speed at which failure occurs 50% of the time, considering uncertainties in wind demand and roof capacity.  This analysis also revealed which components in the roofs or walls were likely to fail first. Some failure modes produce more severe consequences for the structure and its occupants. For example, the failure of connections between the trusses and walls resulted in complete roof loss, whereas failure at the panel fasteners will only result in the loss of roof panels.

Based on these assessments, first, we recommend strengthening the connections between trusses and walls, to prevent failure that could lead to the loss of the entire roof-to-wall system. Our analysis showed that builders should include hurricane straps at each truss-to-wall connection, avoiding using toe-nailed connections to attach the truss to the wall and also avoiding building a roof structure that is not connected to the wall system, which  occurs primarily  in masonry buildings. 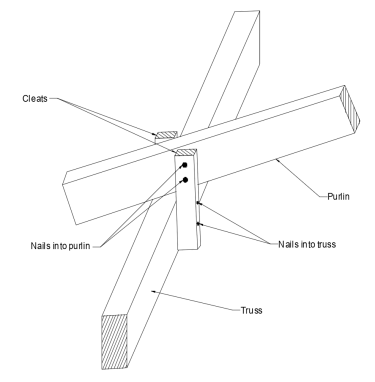 Finally, builders should strengthen the connection of the roof panels to the roof, which was the most prevalent governing failure mode, but is less severe than if truss-to-wall or purlin-to-truss failures occurred. The panel-fastener interface can be strengthened by making fastener spacing no bigger than 6 inches on both interior and exterior purlins, which improved performance regardless of the type of nail or head diameter; installing 26-gauge corrugated galvanized iron panels (CGI) or thicker, such as 24-gauge CGI if available; installing trapezoidal panels, rather than corrugated panels; using umbrella nails to fasten panels to purlins; and replacing corroded roof panels or painting the roof panels with rust-resistant protective coatings.

Our analysis also led to recommendations for the construction or reconstruction of new roofs. Builders should reduce the spacing of purlins to a maximum of 2-feet and trusses to a maximum of 4-feet to improve roof performance. Our findings established that the reduced wind pressures on a hip roof lead to overall reductions in demand and improved component performance; builders should use hip roofs instead of gable roofs if possible, although we recognize that builders may be much more accustomed to building gable roofs. Finally, wood deterioration reduced performance and, thus, deteriorating wood members should be replaced with new, treated wood members when possible.

Ideally, all of these changes and recommendations would be made to increase housing safety, but any one of them on their own will make an improvement. Reducing fastener spacing is likely the easiest change to implement as it requires adding extra nails and nothing has to be removed or replaced.

Overall, the findings of this study were used to establish feasible recommendations for modifications to increase housing safety based on a range of housing variations commonly seen across Puerto Rico and materials available in locally owned hardware stores. We have estimated the costs of these recommendations (materials) range from the lowest cost modification of $5, decreasing nail spacing at panel-fastener interface, to the highest cost of $400-$500 to replace the roof panels of an entire house. We hope to share our list of prioritized recommendations with local community-based organizations, households, and builders across Puerto Rico to change misaligned perceptions about safe housing construction, and ultimately, to improve housing safety in hurricanes.