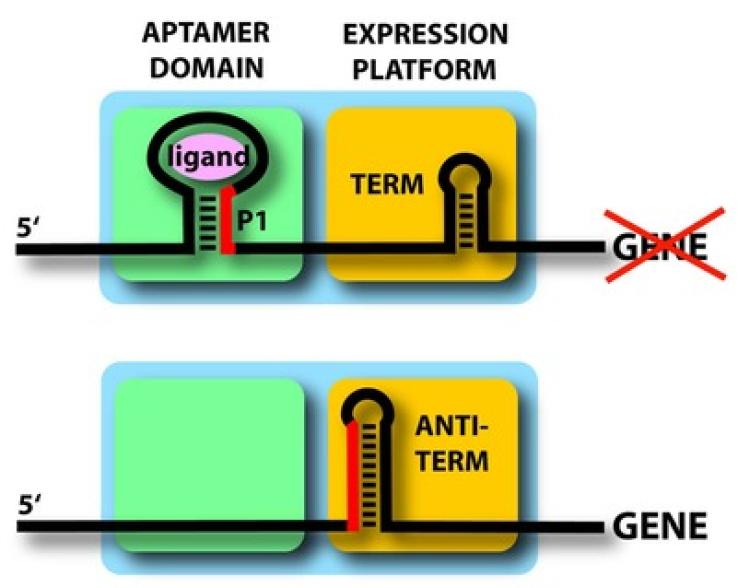 Riboswitches are a class of non-coding RNA elements commonly found in the 5’-UTRs of bacterial mRNAs that regulate expression in a cis-fashion by virtue of their ability to directly interact with a specific cellular metabolite. Recognition of the effector ligand by the mRNA is achieved by a receptor, known as the aptamer domain, whose complex tertiary architecture scaffolds a binding pocket that forms remarkably specific, high affinity complexes with the metabolite. Effector binding is communicated to a downstream regulatory domain, commonly called the expression platform, which forms of one of two mutually exclusive secondary structures that serve as signals for turning expression on or off. The broad distribution of riboswitches in the bacterial kingdom, including many medically important pathogens such as Staphylococcus aureus andStreptococcus species, highlights the biological importance of this regulatory mechanism. Because riboswitches often regulate essential metabolic genes they have become targets of interest in the quest for new antimicrobial compounds. In the last few years, breakthroughs have been achieved towards identifying and validating new classes of riboswitches and determining how their aptamer domains recognize structurally diverse ligands.

X-ray crystallography is the most powerful tool that we have available to us to generate hypotheses about the structure and function of riboswitches.  Focusing upon the aptamer domain, the receptor for the riboswitch's small molecule effector, we have determined the structures of a number of different aptamers including the purine, SAM-I, SAM-II, lysine, and SAH (see "Structures" tab for more information).  In addition to these RNA-ligand complexes, we have been able to determine the unbound structures of several of these riboswitches to begin to understand the nature of ligand induced conformational changes in the aptamer.  Finally, we continue to work on each of these RNAs through ongoing investigations their complexes with other small molecules.  These structures reveal aspects of specificity of the RNA for its cognate effector and the plasticity of the binding pocket. 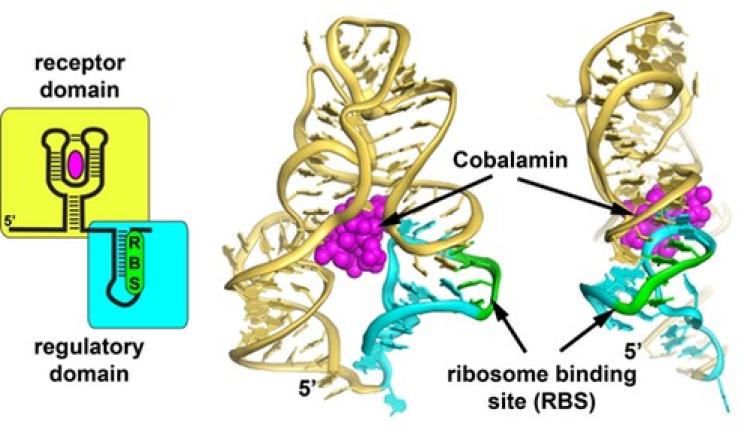 This enables us to obtain atomic-level pictures of riboswitches bound to their effector that yield new insights into both small molecule recognition by RNA as well as mechanisms of riboregulation.  A recent example is a structure of a cobalamin-sensing riboswitch that includes both the aptamer domain and the expression platform (Nature 2012):

In addition to our work on riboswitches, we are also continuing to develop tools that facilitate RNA structure determination in collaboration with Prof. Jeff Kieft of the University of Colorado Denver Health Sciences Center.  One tool that we have developed is a native RNA purification system using an affinity capture tag (see below, left).  Following standard T7 RNAP in vitro transcription, a capture protein (His6-MBP-MS2 coate fusion) is bound to the 3' affinity tag and passed over a nickel column.  The RNA of interest is eluted by adding glucosamine-6-phosphate, which activates the GlmS ribozyme.  A second tool that we have developed is the "G-U" phasing module, a small motif that can be added within an A-form helix that recruits iridium hexammine to the site.  This module (right) has been critical for solving various RNAs by our group and others. 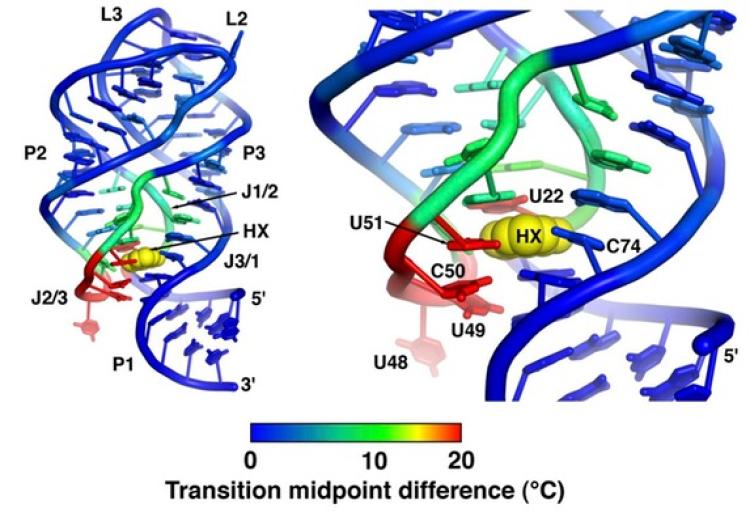 While X-ray crystallography is capable of generating useful models of RNA and its complexes with proteins and small molecules, it only represents a snapshot in the life of the mRNA.  We utilize a variety of biophysical and biochemical approaches to uncover the nature of ligand induced conformational changes in the RNA and how this affects the structure of the downstream secondary structural switch in the expression platform.

An example of one approach is a chemical probing technique called "SHAPE".  This technique utilizes a reagent that reacts with conformationally dynamic 2'-hydroxyl groups in the RNA backbone.  Reaction of the reagent with a sugar leads to a modification that can be revealed as a reverse transcriptase stop on a sequencing gel.  Of particular importance, we can probe the RNA or RNA-ligand complex over a broad temperature range to monitor its unfolding with nucleotide resolution.  This approach, applied to the purine riboswitch, revealed that the ligand stabilized structure principally within one joining region that acts as a flexible "lid" that encapsulates the nucleobase within the RNA.

Importantly, this study showed that tertiary structure formation involving the switching sequence was tightly coupled to ligand binding.  This provides the physical linkage between effector bindng and the downstream regulatory switch.

Applications of riboswitches in synthetic biology.

Devices composed of RNA are emerging as important tools in synthetic biology for applications including in vivo detection of small molecules with genetically encodable biosensors and engineered regulatory elements to control gene expression. In part, this is because of the ability to select nucleic acids with a desired activity using well-establishedin vitro evolution methods (SELEX). This method subjects a starting pool of random sequences to multiple rounds of a selection pressure and replication of the survivors. The result, when the selection pressure is for binding, is an aptamer capable of binding the target molecule with high affinity and specificity. In the 20 years since its development, SELEX has yielded RNAs capable of binding a chemically diverse assortment of compounds, revealing that aptamers for almost any desired molecule can be obtained. For many applications, the aptamer must be coupled to a readout module that transduces the binding event into a detectable signal, a significant hurdle in the engineering of practical devices. 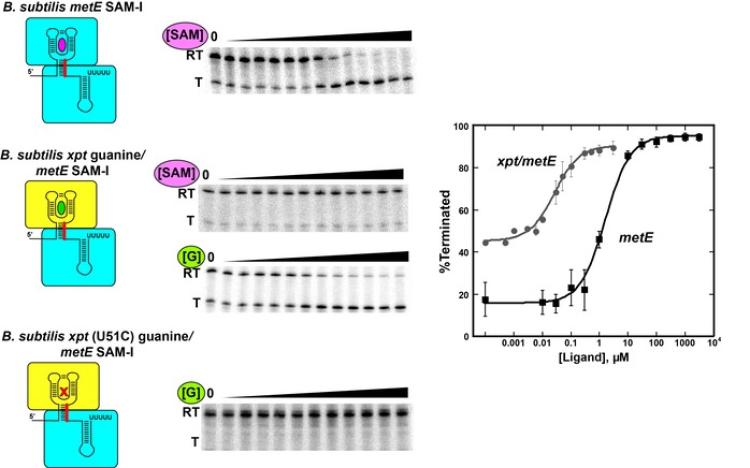 An example of such a simple "mix-and-match" is the creation of a chimera between a guanine-binding aptamer domain (xpt from B. subtilis) and an expression platform from a SAM-sensing riboswitch (metE from B. subtilis).  The gels represent a single-turnover read-through transcription assay as a function of effector (SAM or guanine) concentration.  These are "OFF" switches in which the effector promotes formation of the terminated (T) product.  Data can be quantified to yield the concentration of effector required to elicit a half-maximal regulatory response (right). 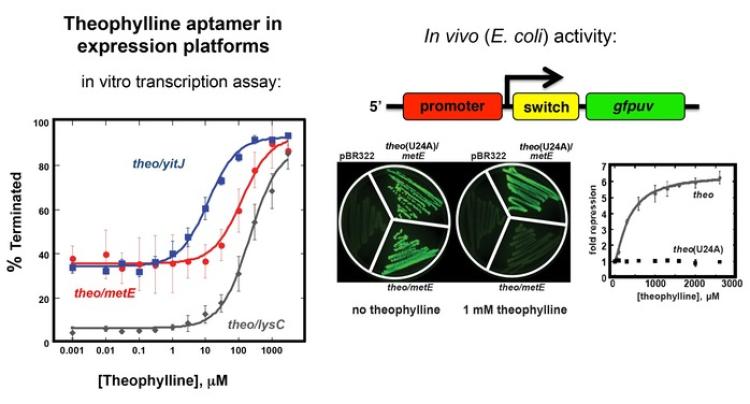 More importantly, we can attach synthetic aptamers to the metE modular expression platform to yield chimeric riboswitches that function both in vitro and in vivo.  Below show data for a chimera between the SELEX-derived theophylline aptamer and several different biological RNA switches:

We are continuing to develop these and other tools for the facile creation of RNA sensors for cell-based applications as well as collaborating with other groups to apply these novel biosensors to real-world synthetic biological applications.