Legalizing 2nd Class Citizenship: Legislation's Role in Nazi Germany and the Holocaust and What We can Learn from It in Contemporary America 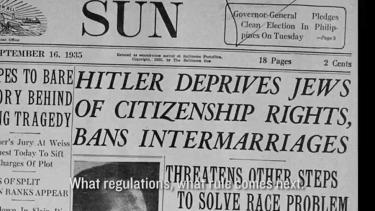 Professor David Shneer will give a public lecture on Monday, April 24 at the Colorado State Legislature in honor of Holocaust Commemoration Day 2017. In this lecture, Professor Shneer will talk about the Legislation's role in the Holocaust and what contemporary American can learn from it.

Professor David Shneer is the Louis P. Singer Endowed Chair in Jewish History and Professor of History, Religious Studies and Jewish Studies. His research focuses on 20th century European, Russian, and Jewish history and culture. His newest book, Through Soviet Jewish Eyes: Photography, War, and the Holocaust (Rutgers University Press, 2011), finalist for the National Jewish Book Award and winner of the 2013 Association for Jewish Studies Jordan Schnitzer Prize, looks at the lives and works of two dozen Soviet Jewish World War II military photographers to examine what kinds of photographs they took when they encountered evidence of Nazi genocide on the Eastern Front.