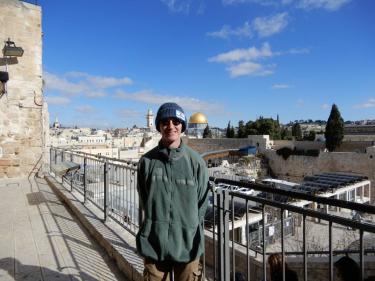 Gavin Coulson is currently a Senior at CU Boulder, and comes to us from Albuquerque. He is majoring in Jewish Studies and Japanese Language and Culture. Gavin says that although this may seem like a strange combination of majors to some, he views it as the perfect opportunity to combine eastern and western perspectives for a full, 360-degree view of modern and ancient modern world affairs.

Gavin’s affinity for learning about Judaism, Hebrew, and the Palestinian-Israeli conflict brought him to the Program in Jewish Studies. He particularly enjoys the diverse series of Hebrew language courses offered by the program, which allows students to dive into learning Hebrew as both a modern and ancient biblical language. Gavin says that this, combined with his other Jewish Studies courses, has allowed him to find a deeper meaning in the Hebrew Bible and other ancient texts, enabling him to look critically at how they are used in modern day politics and religion.

During this past Fall 2016 semester, Gavin participated in an internship with Congressman Jared Polis’ office where he learned about how American politics work, including the Judaic reasons as to why someone may want to trade a life of business for a life of politics. In addition to Jewihs Studies, Gavin is also involved in Hillel CU Boulder, Boulder’s pre-law fraternity Phi Alpha Delta, and the National Society of College Scholars.

“Being back in Israel as a college student that can speak Hebrew and who possesses a deep knowledge of ancient-contemporary history and issues allows me to see Israel not through the lens of an American tourist, but as an American wanting to learn more about a region of the world that is teeming with war and conflict, but also life and beauty beyond wonder.” – Gavin Coulson
Currently, Gavin is studying abroad in Israel where he will be focusing his studies on modern Hebrew, the Israel-Palestinian conflict, and Diaspora Jewish-Israeli relations. While abroad, he will also be working on a Capstone Project with Professor Sam Boyd that will focus on slavery laws and how they may have been used in biblical and other Ancient Near Eastern contexts. He will also look at how the modern LGBTQ community and Reform Movement view slavery in the Hebrew Bible and how its interpretation impacts modern civil rights.

Upon graduation, Gavin plans to work in Israel for a year before pursuing a career as a rabbi. Tentatively, he plans to enter the US military as a chaplain upon successful completion of rabbinical school. He is confident that his degree in Jewish Studies will help him achieve these goals.