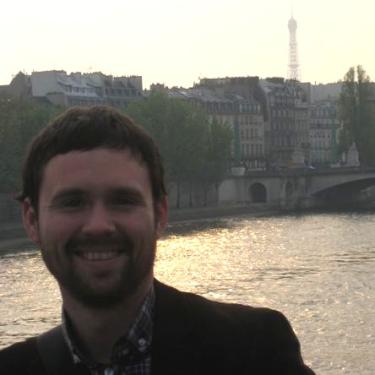 Nick Underwood, Ph.D. Candidate in History, presented the Max Weinreich Fellowship Lecture at the YIVO Institute for Jewish Research on March 16, 2016.
Nick's paper, “Yiddish Culture and Interwar Paris: The 1937 World’s Fair & The Modern Jewish Culture Pavilion,” argues that interwar Paris was an exciting, yet widely under-examined hub of immigrant Yiddish culture. During the 1920s and 1930s, approximately 150,000 immigrant Jews from eastern and central Europe came to Paris, transforming themselves from a disparate group of immigrants unsure of their place in France to a community connected and coalesced around a new, transnational Western European, Yiddish diaspora nationalism. Based on what is the first cultural history of the immigrant Jewish community in Paris, this talk will discuss the Modern Jewish Culture Pavilion at the 1937 World's Fair - a virtually unknown exhibition of global Yiddish culture. Constructed specifically for World's Fair, the Modern Jewish Culture Pavilion put Yiddish Paris on the world stage, and highlighted the communal power that culture could have for immigrant Jews in 1920s and 1930s Paris.
Nick will publish an article on this aspect of his research in Issue 2 (2016) of East European Jewish Affairs, a special issue on “Global Yiddish Culture.”
On April 20, 2016, Nick will defend his dissertation, "Staging a New Community: Immigrant Yiddish Culture and Diaspora Nationalism in Interwar Paris, 1919-1940" as the final requirement for the PhD in the Department of History at CU-Boulder.
After graduation, he has a few things lined up. He will continue on as Project Manager for the Digital Yiddish Theatre Project and serve as Managing Editor for East European Jewish Affairs. In fall 2016, he will teach Yiddish DILS at CU-Boulder and at Napa Valley College. In spring, he will teach Modern European Jewish history at Sonoma State University. In fall 2016 he will deliver an invited talk at the University of California, Berkeley’s Magnes Collection of Jewish Art and Life. Nick's talk is entitled, "From Shund to Avant-garde: Yiddish Theatre in the City of Light."
Tags: