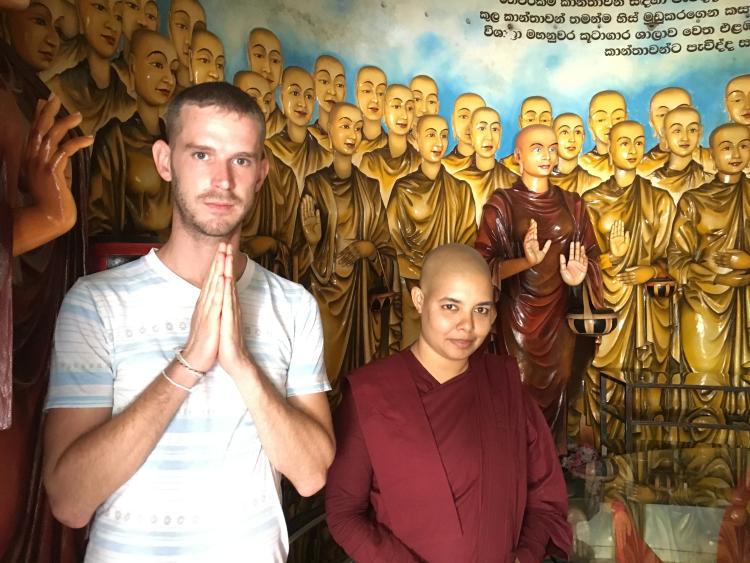 Tyler A. Lehrer, MA candidate in Religious Studies and Outreach and Adminstrative Coordinator for the Program in Jewish Studies, won the Ray Hauser Award from the University of Colorado Graduate School to travel to Sri Lanka to conduct MA thesis research. This award is given in recognition of Ray Hauser, the first Chair of the Graduate School Advisory Council, to fund graduate student research expenses. After his graduation in May, Tyler will be pursuing a PhD in the Department of History at the University of Wisconsin-Madison to continue his investigations into gender and religious history in South and Southeast Asia.

With the Ray Hauser Award, Tyler travelled to Sri Lanka over December 2015 - January 2016 to conduct research for his MA thesis about contested ordinations of Buddhist nuns (bhikkhunīs) in the monastic traditions of South and Southeast Asia. Tyler's research interrogates questions of authority, gender, media, and transnational politics in the Buddhist monastic traditions of Asia. Through his investigation of controversial ordinations of Buddhist nuns in Sri Lanka, Tyler has uncovered surprising confluences between globally-operating Buddhist feminist organizations, gendered nationalist and Islamaphobic rhetoric, and rich media environments for the playing out of disputes about the legality of fully-ordained nuns in contemporary Lankan Buddhist communities. His MA thesis, with the tentative title "Mediating Monasticism: Gender, Media, and Discourse in Sri Lanka's Bhikkhunī Ordination Dispute," argues for a shift in academic focus away from discussions centered around textual records chronicling the Buddha's decision to ordain nuns and why, and toward the wider geopolitical conjunctures, varying influence of feminist thought and financial support, and the rich mediated environments through which the current nuns' ordination dispute in Sri Lanka is brought into more nuanced view.