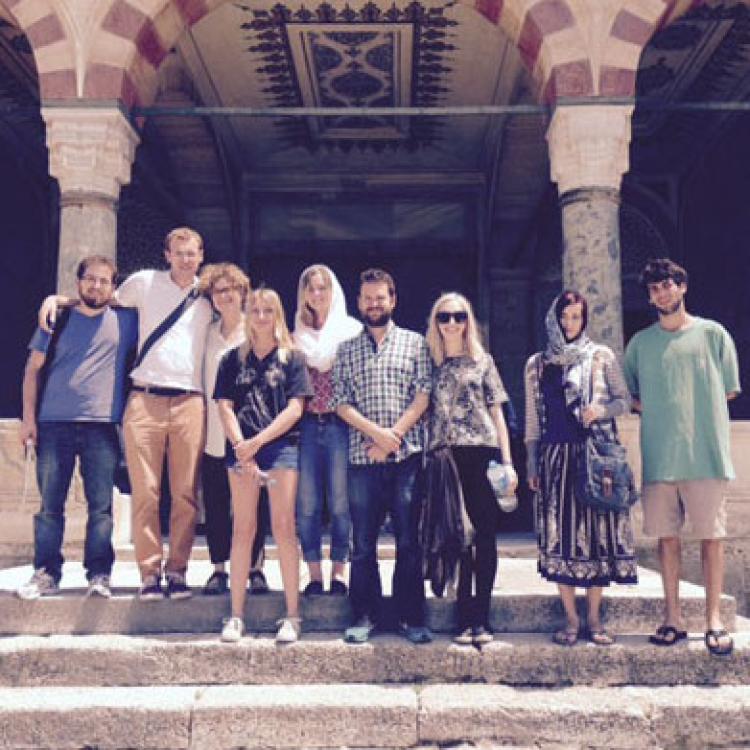 From June 9-June 25, 2015, six CU undergraduates and two graduate students joined Nan Goodman, Director of the Program in Jewish Studies and Professor of English, in a life changing experience--a global seminar in Istanbul about the multi-ethnic connections and cross currents between Jews and Muslims, past and present.  With the generous support of the University Rector, Dr. Gülay Barbarosoğlu, students lived and studied on the Boğaziçi University campus, visited mosques, churches, and synagogues, attended religious services, spoke with community members of all faiths, and learned first-hand about the rich and heterogenous heritage of Turkey.

Their Turkish guide, Cem Durak, a Boğaziçi University student, made sure they had access to unusual sites and ceremonies. Cem is currently enrolled as a first year Master's student in the Religious Studies Program here at CU.

Students: Watch out for more information about our 2016 Global Seminar to Istanbul!

Learn More about the Global Seminar!

By Clint Talbott
Published in Colorado Arts & Sciences Magazine. Click here for a link to the original article.

When you think of Istanbul, you might think about its historical status as the center of the Byzantine and Ottoman Empires, or about its present-day status as a city straddling two continents, Europe and Asia, in the Muslim country of Turkey.

But, “When people think about Istanbul, they don’t necessarily think about Jewish life,” says Nan Goodman.

Goodman, professor of English and director of the Program in Jewish Studies at the University of Colorado Boulder, is starting to change that. This summer, she organized a university-sponsored global seminar in Turkey. It was called, “Jews & Muslims: The Multi-Ethnic History of Istanbul.”

Turkey is the only Muslim country that has a thriving Jewish community, Goodman says. She first visited Turkey in 2011 as a visiting professor at Istanbul’s Boğaziçi University. She returned to Boğaziçi University in 2012 to give two lectures on human rights for the Humanities program and again last year as a Fulbright Fellow.

There, she got encouragement to launch this year’s global seminar. Her Turkish colleagues agreed that it would be “incredible to take students to Istanbul to study Jewish and Islamic connections, of which there are many.”

“My goal for the future is to institute some version of this class on a more permanent basis, in which students from CU have the opportunity to really mingle with Boğaziçi students.”

The greatest payoff for the students was a first-hand experience of diversity and of the messiness and complexity of boundaries—“religious, disciplinary, cultural, you name it.”

“Seeing the connections rather than the separations between these forms of religious practice and belief and the lives of people in Turkey was invaluable,” Goodman says.

In recent years, Goodman’s scholarship has found surprising connections between the Puritans and the Ottoman Empire. That scholarly inquiry will be part of her forthcoming book, The Puritan Cosmopolis.

Noting that Puritans believed themselves to be the second incarnation of the Jews, Goodman describes her current research on the link between Islam, Judaism, and the Ottoman Empire.

The Ottoman Empire was a center of the universe for nearly six centuries and was home, over the course of centuries, to hundreds of thousands of Jews “who were allowed to be Jewish there in a way they weren’t at various points in time anywhere else.” Many Jews arrived before or during the Spanish Inquisition.

This does not mean the Ottoman Empire was overly welcoming. Jews, like other minorities, were subject to a special tax and were officially prohibited from pursuing certain professions or living in certain places.

The Jewish population in Turkey is dwindling now, but “they’re wonderful, lively and dedicated.”

Goodman describes Turkey as a place that has traditionally tolerated Jewish people. The concept of “tolerance” comes from the Enlightenment, specifically John Locke’s 1689 Letter Concerning Toleration.

Tolerance is touted as “one of the great virtues of an enlightened, liberal democracy, an enlightened culture,” Goodman says. “But it’s an ugly word, because it suggests that if you are merely tolerated, you’re not fully participatory. That continues to be a problem for the Jewish community.”

For instance, Goodman notes, Jewish men will don a yarmulka upon entering a synagogue, but they are careful to remove it immediately when leaving. “Being visibly Jewish in that way is just not common.”

Questions of “hospitality,” “tolerance,” and the overlapping traditions among faiths are “what I tried to pick apart with my students.” While in Turkey, the students learned about Muslim and Christian Turks as well.

“Turkey has a heterogeneous past,” Goodman says. “It’s not clear what its future will be.”

The class was in Turkey from June 9 to June 25. Students lived in the Boğaziçi University dormitories. The university’s rector provided in-kind contributions to the program by giving the students free room and board.

The rector is very open to all kinds of new research and scholarship and wants to promote the study of the Jewish population in Istanbul in particular. Goodman plans to do another global seminar in summer 2016. The students who went this year are majoring in international affairs, Jewish Studies, religious studies and political science.

“For me, this was a wonderful inaugural event in my directorship (in Jewish Studies). What I really want to do in the Jewish Studies Program is … to educate people and inspire them to learn about the incredibly wide parameters of Jewish life all over the world.”

“To learn about Judaism through the past and present of Jewish life and its symbols in a Muslim land is to learn things I never knew before, and I believe that’s true for my students as well.”

To read a Turkish newspaper’s coverage of the CU global seminar, click here.