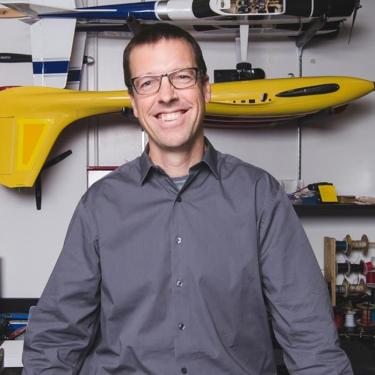 Dr. Eric W. Frew is an associate professor in the Department of Aerospace Engineering Sciences and Director of the Research and Engineering Center for Unmanned Vehicles (RECUV) at the University of Colorado Boulder. He received his B.S. in mechanical engineering from Cornell University in 1995 and his M.S and Ph.D. in aeronautics and astronautics from Stanford University in 1996 and 2003, respectively. Dr. Frew has been designing and deploying unmanned aircraft systems for over ten years. His research efforts focus on autonomous flight of heterogeneous unmanned aircraft systems, distributed information-gathering by mobile robots, miniature self-deploying systems, and guidance and control of unmanned aircraft in complex atmospheric phenomena. Dr. Frew was co-leader of the team that performed the first-ever sampling of a severe supercell thunderstorm by an unmanned aircraft.