The CUbit Quantum Initiative is an interdisciplinary hub that:

Partners with regional universities and laboratories that contribute complementary strengths

Serves a spectrum of local, regional and national interests, including workforce development 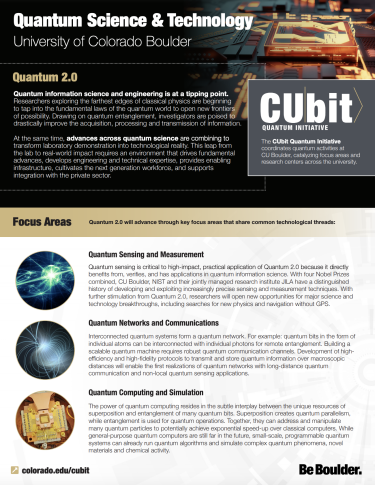 Founded on a local triad of CU Boulder, the NIST Quantum Physics Division (as a core component of JILA) and Front Range companies, CUbit will advance fundamental science and build a strong foundation for novel quantum technologies and their rapid dissemination, application and commercialization.

The United States has placed quantum information science and technology (QIST) at the top of its science and technology agenda with an unprecedented investment of more than $1.2B to ensure that the U.S. maintains and advances its global leadership in this emerging technological arena, one recognized for its economic impact and importance to national security.

The National Strategic Overview promotes a "Science First" approach and calls for fundamental understanding and advances in and among quantum sensing and metrology, quantum computing and simulation, quantum communications and networks, and quantum materials. With successful recruitment of partner universities and National Laboratories, that list plays to Colorado's strengths. 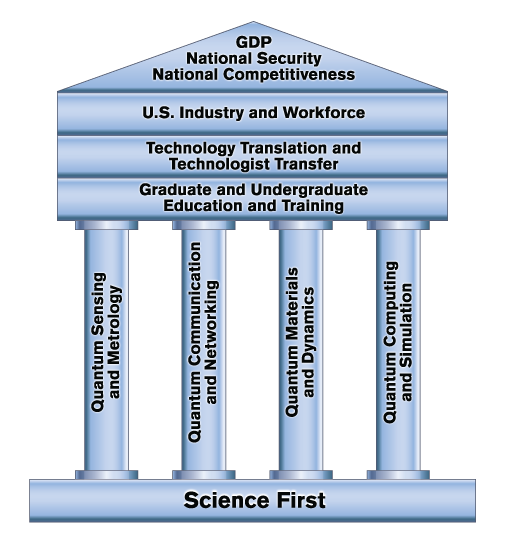 How the scientific, education and industry components of CUbit work together (Click to enlarge)

Further addition of the envisioned close involvement of regional and national companies with their already advanced strategies in quantum technologies, alongside the development of multi-level educational programs in QIST, would highlight CUbit as an exceptional regional and national resource.

The Colorado Front Range and neighboring regions already house a vigorous ecosystem of quantum-intensive companies, from a few large entities such as Lockheed Martin and Honeywell to numerous small and mid-sized companies and startups, and the Denver/Boulder area is consistently ranked one of the most entrepreneurial regions in the nation. This culture will help CUbit place its fundamental research advances into appropriate business channels for further development, prototyping, and eventual delivery as goods and services for beneﬁt of the national economy.

Connections between CUbit and regional quantum-intensive companies also strongly overlap with NIST’s mission and interests, and the exceptionally productive scientiﬁc partnership between CU Boulder and NIST could be further strengthened for the beneﬁt of both CUbit and NIST.

With its multiple competitive advantages, CUbit has an opportunity to create a preeminent QIST hub where university, industry and government scientists seamlessly conduct joint research and development, deliver student and workforce training, and exchange information on their scientiﬁc advances so that together, we can make signiﬁcant national and international impact.