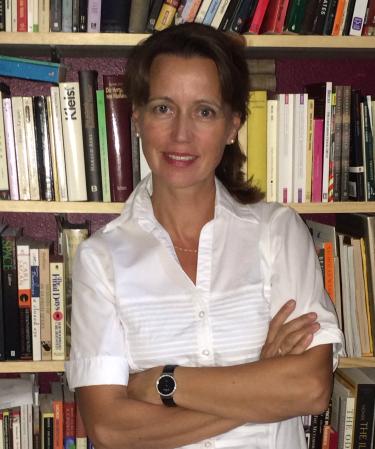 Dr. Anja Lange received a BA in American and French Literature, as well as a minor in economics, at the University of Göttingen, Germany.  Later she earned her MA and PhD (2000) in Comparative Literature at the University of Colorado Boulder. Her main research interests include travel literature, literature of the sea, architecture, and American literature of the nineteenth and twentieth centuries.  On the other hand, her broadly interdisciplinary background includes forays into comparative religion, China studies, and the art and architecture of medieval and early modern Europe.  She has taught in four other academic units at CU Boulder:  Comparative Literature, English, Women’s Studies, and Germanic & Slavic Languages. She also taught at Jiaotong University in Xi’an, China, and in various language institutes in Hamburg, Germany.

Anja joined the Herbst Program in the fall of 2001.  Since then, she has been teaching literature not only for its own merit but also as a vehicle for gaining insight into engineering and other fields.  The problems in professional engineering will never be as clear-cut as those in the classroom, so Anja offers her engineering students literature as a playground on which to confront ambiguity and paradox.  It might seem counter-intuitive, but Plato, Shakespeare, Voltaire, Melville, and T.S. Eliot can help Herbst students become better engineers by helping them engage in self-learning and interactive problem-solving.  Anja believes that the synergy found in an interdisciplinary study helps one fully understand our civic responsibilities; these responsibilities are even greater for the engineer.

Anja is interested in enriching the interdisciplinary learning experience through non-traditional approaches, such as service learning and activity-based learning. One of the most non-traditional learning experiences in the College of Engineering is her Global Seminar to Xi’an Jiaotong University in China, which she created and has taught since 2009.  Outside the classroom, she enjoys taking in the beautiful Colorado landscape from the saddle of her horse.