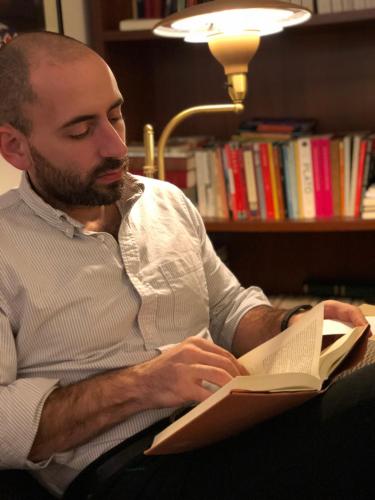 In class this year, I will be exploring the relationship between science and self-knowledge. If anything suggests that science has a horizon, that what science can make and do is somewhere limited, it is the human self. Formed as we are by particular circumstances irretrievably lost to time, we seem fated, tragically, never to know who we are. Yet, if we could reduce human nature to such formulae as we find in physics, would we not cease to be surprising and remarkable—would we still be interesting, worthy of study? Would we even be recognizably human, and would not this loss of humanity be the real tragedy? On the contrary, it seems that what makes you you refuses to bend to mathematics and method but rather stands alone, irreducibly itself. I’ll be exploring these questions using works by Foucault, Plato, Descartes, Freud, and Woody Allen.

More generally, my research focuses on the origin, nature, and enduring importance of Socratic political philosophy. What was it about the pre-philosophic worldview of the Greeks that made the quest for knowledge appear so necessary? What, in turn, led to the emergence of Socrates, and why has he served ever since as mankind’s exemplar of open questioning? And what guidance can we find in these texts for our own attempt to promote publicly or pursue individually the life in search of knowledge?

I have explored these questions in writings on Greek philosophy and poetry. I am the author of Becoming Socrates: Political Philosophy in Plato’s Parmenides (Rochester: University of Rochester Press, 2018), as well as articles on Hesiod, Parmenides, Thales and Anaximander, Aristotle’s Metaphysics, and Plato’s Theaetetus, Sophist, Minos, and Euthyphro. Presently, I am working on a book manuscript on Plato’s trilogy, entitled Plato’s Living Epistemology, currently under review for publication, as well as articles on Plato, Nietzsche, and Descartes.  To read my work, please visit my personal website and my page on academia.edu.

I have earned a PhD and MA in Philosophy from Tulane University, an MA in Liberal Arts from St. John’s College Annapolis, and a BA in Political Science from the University of Connecticut.