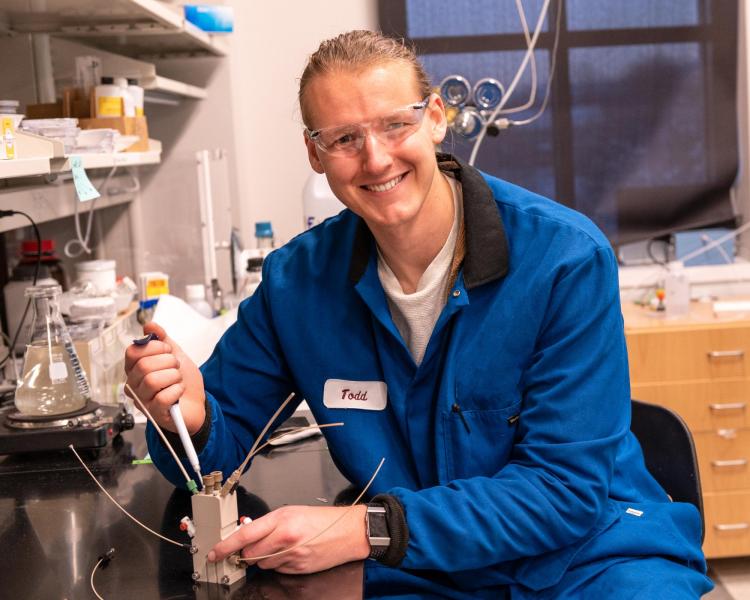 Todd Whittaker is a second year PhD student studying Chemical Engineering. His research focuses on electrochemical methods for solving global energy and chemical demands such as CO2 reduction, biomass upgrading and fuel cells. Todd was recently awarded a Research Excellence Award based on his accomplishments and contributions to the research community. We asked Todd a few questions to learn more about him as a researcher and get to know him better. Read more below!

What advice do you have for someone who is interested in starting research?

I would encourage anyone who is interested in research to become comfortable with two very uncomfortable things: not always knowing what to do and failing often. Research often feels like a marathon, and the most successful researchers I know typically try lots of things, knowing that a good fraction of them won't work out. Rarely does research ever proceed linearly, where a researcher has an idea, develops a hypothesis, tests it and comes up with awesome results. In my experience, some of my best work has come out of ideas that spectacularly failed and I have sought to understand why. These "failures" are what makes research interesting!

Describe an "a-ha!" moment you had while doing research.

I was working with a labmate to develop a procedure to separate two compounds from my reactant mixture that were particularly difficult to separate. We had already tried many different things but he suggested another idea that I hadn't thought of and it worked! This "a-ha" moment is probably one of the more valuable lessons in research - your colleagues are a fantastic resource for problem solving.

What is a useful research skill you think everyone should have?

The ability to challenge your own biases and critically evaluate why you think a certain way is something everyone, not just those in research as a career, should have. In research and in everyday life, we go in to situations already believing a certain thing to be true. When we are presented evidence that would suggest otherwise, we need to be comfortable accepting we may have been wrong. Resistance to new information is natural (no one likes being wrong), but it can end up costing more time to stubbornly insist on being correct than it is to try to evaluate the new information and incorporate it into your thought system.

Why is your research important to the community or world at large?

Electrochemistry has many different applications for combating climate change, we have already seen the impacts it can have in batteries for energy storage and transportation purposes. My research is focused on developing electrochemical processes for decarbonizing the chemical sector. If we can make more sustainable chemicals using renewable carbon like biomass or even exhaust CO2, and renewable electricity, we could significantly shift the needle towards a more sustainable future.

Tell us a fun fact about you that is not related to your research or academics.

Before I became involved in research, I was determined to became a professional soccer player. In fact, the only reason I moved to the US in the first place (I'm originally from Australia) was because I couldn't get a visa to stay in the UK to play soccer! I played all four years as a goalkeeper for Trinity University and became an Academic All-American in my senior year, which was a very proud moment because it represented the dedication I had to both my athletic and academic interests.

What is a good book you have read recently and why did you enjoy it?

I don't read for leisure nearly as much as I'd like to, but I recently read "Are We Smart Enough to Know How Smart Animals Are?" by Dutch ethologist Frans De Waal. Its a short but fascinating read about how understanding of animal intelligence has been largely limited by our ability to design good ways to measure it. The quote "if you judge a fish by its ability to climb a tree, it will live its whole life believing that it is stupid" came to mind while reading this, which really opened my eyes about flaws in not only studies of animal intelligence but also in human education. Thoroughly recommend.

If you could have dinner with anyone (living or dead), who would it be and why?

There are so many to choose from, but I think I'd have to choose James Hetfield. I'm a Metallica superfan, and I think it would super fun to just chat with him about life. But there are so many interesting people out there, I could choose probably hundreds more.