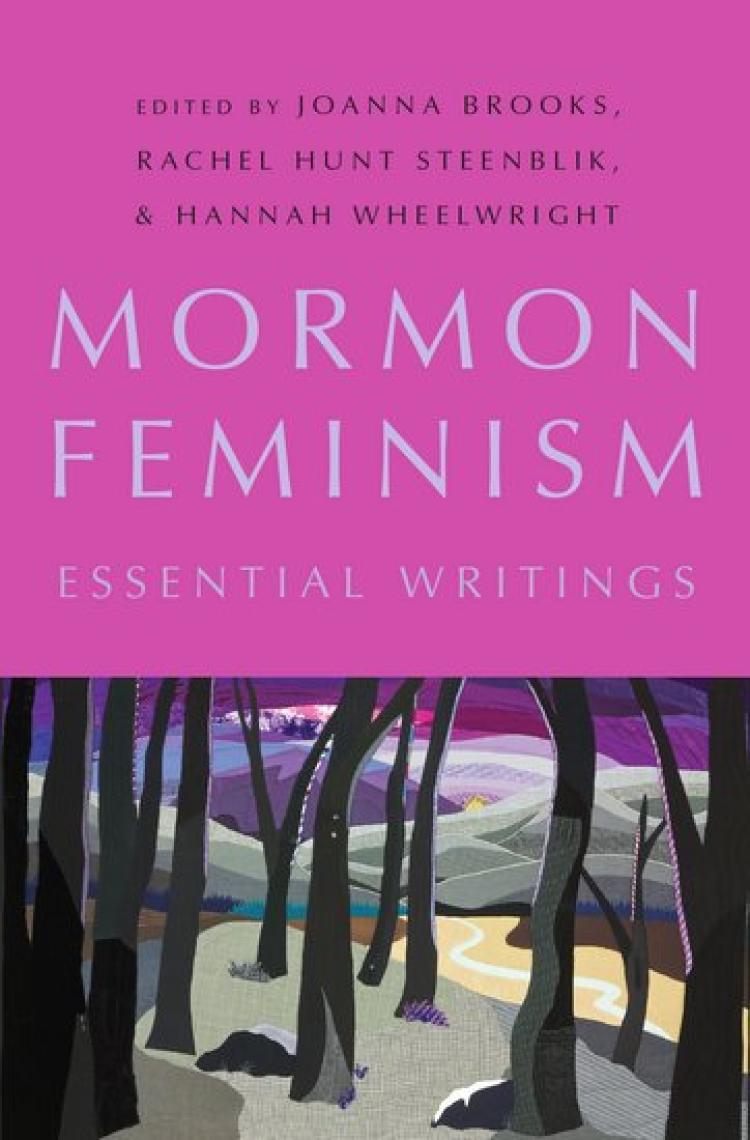 “How can you be a Mormon and a feminist?” The question has been asked of Mormon feminists for decades, and the editors of the new anthology Mormon Feminism provide a compelling answer. Published by Oxford University Press, it is the first serious look at the theoretical base of modern Mormon feminism. Though much attention has lately been paid to the recent resurgence of feminist activism within the Mormon Church, with stories appearing at regular intervals in major news outlets such as Huffington Post and the New York Times, this is the first scholarly attempt to track the history and influence of “modern” Mormon feminists in their own words. Beginning with consciousness-raising meetings in the 1970s and tracking the movement through its resurgence in the 21st century, Mormon Feminism is valuable to scholars and students, interested outsiders and Mormon feminists.

Academically stimulating and well-written, the book is co-edited by three Mormon scholars. Joanna Brooks is a Professor of English and Associate Vice President of Faculty Affairs at San Diego State University and author of nine books on American culture, religion, and politics. Rachel Hunt Steenblik is a Ph.D. student in philosophy of religion and theology at Claremont Graduate University, and Hannah Wheelwright is Senior Programs Associate at the Robert F. Kennedy Center for Justice and Human Rights and founder of Young Mormon Feminists. The editors’ introductions to each piece are informative and concise, offering just enough information for readers unfamiliar with Mormon theology, culture and vocabulary without overshadowing the work of the contributing writers themselves. The book is also visually striking, its cover bearing a print of Nikki Hunter’s quilt “Sunday Morning,” created from clothing worn by Mormon feminists on the first annual Wear Pants to Church Day in 2012. The quilt features a woodland scene resembling the grove where Mormons believe Joseph Smith saw God, and the image is a powerful representation of the restorative work Mormon Feminists believe they are doing.

Though Mormon Feminism focuses on activism in the 20th and 21st century church, a brief account of the first-wave feminist work of the movement’s “founding mothers” is given, followed by a helpful timeline of important events in modern Mormon feminist history. This introduction to the 19th century church’s very progressive views on women will likely be startling to many scholars and Mormons alike, as this legacy of suffrage work and feminist activism are not widely known even within church membership. Knowledge of this history is crucial, however, to understanding the genealogy of the current movement, and Mormon Feminism packs the essential information into a very readable short introduction.

The book is organized chronologically, and with Claudia Lauper Bushman’s 1971 essay “Women in Dialogue: an Introduction,” the editors introduce readers to the “birth story” of the mothers of modern Mormon feminism. Highlighting the personal essays by the women involved in the first Mormon feminist consciousness-raising meetings in the early seventies and the powerful poetry of Carol Lynn Pearson, they craft a portrait of activists filled with fear and hope in equal measure. Pushing back against a church that prizes obedience and cultural uniformity above all, these women were putting not just their church membership but their social standing on the line. In a culture where, as Pearson writes in “Millie’s Mother’s Red Dress,” women learn “that a women doesn’t / even exist except to give” claiming a feminist identity is risky.

The first section of the book is largely devoted to chronicling this attempt at reconciling Mormonism and feminism. Much attention is paid in these years to the Mormon doctrine of a Heavenly Mother and the feminists who began to question why she was largely absent from modern church teachings. Though the church formally recognizes the existence of a Heavenly Mother to partner “God the Father,” members are officially discouraged from praying to her and unofficially discouraged from speaking about her. Margaret Rampton Munk’s poem “First Grief” and Pearson’s “Motherless House,” as well as academic works such as historian Linda P. Wilcox’s essay “The Mormon Concept of a Mother in Heaven” wonder aloud about her existence, her purpose and her apparent abandonment of her mortal children on earth. These are especially poignant expressions of Mormon women’s longing for more information about their Mother.

It was during these first stirrings in the early 1970s that Susan Kohler discovered, in the stacks of Harvard’s library, a complete collection of the 19th century Relief Society magazine The Woman’s Exponent. This discovery electrified the fledgling Mormon feminist community, and in the pages of the Exponent Mormon feminists discovered that their foremothers had been well known national figures in political activism, medicine, and women’s suffrage (Utah women were the first in the United States to vote). The find led to a flood of writing by Mormon feminists trying to recover this lost legacy of feminism, and the editors detail how this impassioned, enthusiastic movement ran afoul of the church’s conservative dogma and political retrenchment. The contrast between women’s freedoms in 1870 and 1970 is starkly illustrated here, and skillful editorials walk the reader through the frustration and contradiction that Mormon feminists so often experience when trying to teach this history to other church members.

Also anthologized here are several excellent examples of the satirical work which became a key weapon in the Mormon feminist arsenal in the 1980s. Gender-swap essays such as “A Walk in the Pink Moccasins” and “The Meeting” poke gentle but pointed fun at Mormon expectations of female submission. Significant attention is also paid to those writers who came to be known as the “September Six,” a group of liberal Mormon activists and intellectuals excommunicated in September of 1993. Writings from Margaret Toscano, Lavinia Fielding Anderson and Janice Merrill Allred epitomize a movement that was openly interrogating a church organization they saw as exercising “unrighteous dominion” over church members and particularly women. Pushing back against church hierarchy, which was growing increasingly intolerant of dissent, these and the other writers anthologized here put their reputations and in many cases their livelihoods (many of these activists were employed by, and eventually fired from, church universities) on the line. This openly hostile atmosphere eventually dampened the enthusiasm for Mormon feminism among church members and the movement appeared to go dormant for nearly a decade. Though “underground” discussion groups and publications were still attracting members, publicly identifying as a Mormon feminist was too risky for most members.

All that changed, the editors explain, with the internet age. A relative explosion of progressive, feminist thought began emerging online, and Mormon feminism was back in a big way. Galvanized by progressive Mormon blogs like Zelophedad’s Daughters and Feminist Mormon Housewives, a new wave of feminist scholarship began to emerge along with “a new form of collective internet-based Mormon feminist activism.” Protest actions ranged from Wear Pants to Church Day (women wearing pants in church is not officially prohibited but is strongly culturally condemned) to Ordain Women’s request for admission to the all-male Priesthood Session of the church’s General Conference. Many of these actions gained widespread media attention and Mormon feminism expanded exponentially. When OW founder Kate Kelly and several other prominent Mormon activists were excommunicated in 2014, some worried the movement would disappear or go underground again. But these disciplinary courts appear not to have dampened the enthusiasm of 21st century Mormon feminists and the remainder of the book bears witness to the expansion and maturing of the movement.

For many years centered almost entirely on the experience of white, middle-class American women, Mormon feminism has finally begun to confront its own legacy of racism. The editors’ inclusion of writers such as Samoan novelist Lani Wendt Young, Maori professor and activist Gina Colvin and African-American writer Janan Graham-Russell signals that Mormon feminist scholarship is striving to change the insular nature of the movement. Important and groundbreaking work like Graham-Russell’s “On Black Bodies in White Spaces” and Colvin’s “Ordain Women, But . . .” widen the scope of what Mormon feminism is and what it seeks to do in the world.

One of the longest and most fascinating pieces in the book is Elizabeth Hammond’s “The Mormon Priestess: A Theology of Womanhood in the LDS Temple,” which uncovers the disconnect between what Mormon women are taught about their potential and eternal destiny in Sunday School versus what they encounter in the sacred rites of the Temple (a building Mormons view as holy and which only approved members are allowed to enter.) The cognitive dissonance of this difference can cause serious emotional and psychological trauma to women unprepared for the experience. This essay more than perhaps any other in the book could be critically important reading for Mormon women themselves, but it also provides a very valuable insight into the contradictions and difficulties Mormon women encounter in their own faith.

This book’s publication by the Oxford University Press seems to indicate that Mormon feminism may be beginning to garner the serious academic attention it deserves, and as the movement continues to grow in numbers and influence, Mormon Feminism will likely prove indispensable for scholars of religion, cultural studies or feminist theory.