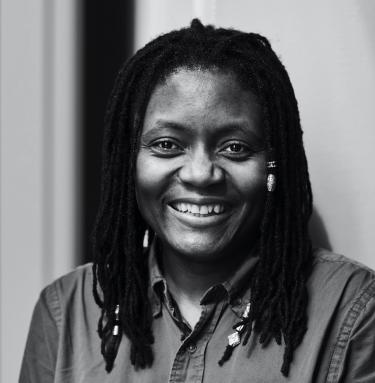 Pronouns: all are welcome

Dr. Nyeck is a multidisciplinary Associate Professor in Africana/Gender Studies in the Department of Ethnic Studies. Trained in political economy of development at the University of California Los Angeles with specialization in International Relations and Comparative Politics, Dr. Nyeck has pursued two research streams to date. The first stream is centered on the political economy of development, governance, and global public procurement reform with an interest in social justice, race and gender-responsive schemes in government contracts. The other stream reflects on gender and identity politics. She has written extensively on interdisciplinary topics such as queerness and politics, public policy, gender equity, ethics and religion, public procurement reform, economic inclusion, and human rights. Dr. Nyeck has been at the forefront of queer studies in Africa and her recent book African(a) Queer Presence: Ethics and Politics of Negotiation (Palgrave 2021), is, according to one reviewer, “field changing and field forging [as] Nyeck invites the reader to engage with a new queer ethics. Her extended questioning of Africana queer existence is thus a multilayered, intellectually inclusive and critical examination of what an African-centered queer studies can become.” Dr. Nyeck is currently pursuing a D.Min in Practical Theology at Virginia Theological Seminary to expand her research on identity and politics to the analysis of intercultural and ecumenical inclusive epistemologies and practices. She serves as the book review editor for the Journal of Africana Religions.

Prior to joining the Department of Ethnic Studies, Dr. Nyeck was a Visiting Scholar at the Vulnerability and the Human Condition Initiative, Emory School of Law. Her upcoming book Gender, Vulnerability Theory and Public Procurement: Perspectives on Global Reform (Routledge Law & Society series, 2023), a product of her time at Emory, is innovative in its theoretical and empirical foci.

Dr. Nyeck is a former fellow with the Meria Institute for Advanced Studies in Africa at the University of Ghana Legon and the Africa Multiple Cluster of Excellence, Bayreuth Academy of Advanced African Studies in Germany. In her work on economic inclusion and identity politics, Nyeck has been successful in assembling and leading international teams to advance research and knowledge dissemination in her areas of research. In this capacity, she often serves as a consultant for NGOs and multilateral financial institutions. Dr. Nyeck is currently working on a book manuscript on the history of colonization in Africa from the perspective of historical political and economic contractual deals between various European powers and African polities from 1620 until 1920.

Dr. Nyeck is a Board member of the West African Research Association and holds the cultural title of Mbombock Koo-Koo among the Basaa, Mpoo, and Bati of Cameroon.

Note to potential graduate students: Please contact me with your ideas prior to submitting an application for our graduate studies program.

Nyeck, S.N. “African Religions, the Parapolitics of Discretion and Sexual Ambiguity in Oral Epics.” Journal of Theology for Southern Africa, no. 155 (2016): 88-104.

Nyeck, S.N. “To Be or Not to Be a Lesbian: The Dilemma of Cameroon's Women Soccer Players.” African Women Writing Resistance: An Anthology of Contemporary Voices. Edited by Jennifer Browdy et al. Madison: University of Wisconsin Press, 2010.