This fall, the Program in Environmental Design at CU Boulder honored two recipients for the 2021 Environmental Design Alumni Awards. This year’s honoree for the Distinguished Alumni Award is Adam Harding and the Young Designer Award was awarded to Ann Dang. Learn more about the recipients.  During Homecoming 2021, ENVD hosted various events for current and Forever Design Buffs, as well as the local design community in recognition of the awards.

ENVD kicked off the recognition events on Tuesday, Nov. 2, with a tour of the Environmental Design building given by Erika Andrade, American Institute of Architecture Students (AIAS) President. Following the tour, the award presentations took place during the Colloquium Lecture Series, where over a hundred students, faculty and staff attended.

ENVD Senior Instructor and Associate Director of Undergraduate Education and Curriculum Stacey Schulte opened the Colloquium and introduced each of the recipients. EVND Instructors Brandon Anderson and Emily Greenwood presented the awards to Harding and Dang. In their presentation remarks, both Anderson and Greenwood recollected their experiences with the recipients. Anderson was an early colleague of Harding’s, who took his first post-graduate position with Roth Sheppard Architects. Anderson recounted his experiences with Harding as he began his professional career. Greenwood served as Dang’s instructor in her landscape architecture studios and other 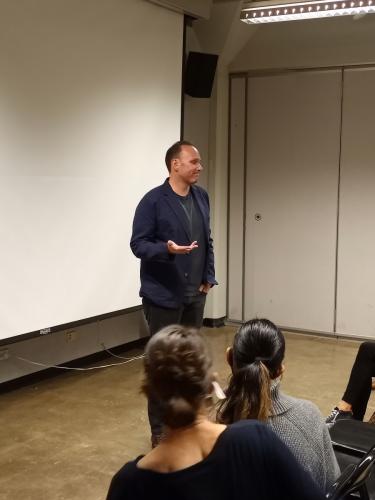 courses and described the young designer’s excellent work ethic both inside and outside the classroom.

Each recipient had the opportunity to present and share their experiences as students in ENVD. They also provided more insight into how they worked toward their professional and academic careers. The Colloquium concluded with a question and answer session hosted by Schulte. Following the event, the recipients were invited to dinner at Ado’s on the Hill. The dinner was attended by Adam Harding, Ann Dang, Brandon Anderson, Shawhin Roudbari, Erika Andrade, Colton Burd, Ty Lanphere and Carlos Carbajal.

Recognition events continued on Wednesday, Nov. 3  with an alumni open house and breakfast in the ENVD Lobby. Students, faculty, alumni and friends had the opportunity to meet and interact with Harding and Dang. The event attracted members from the professional community, including the team from Boulder architecture firm, 505 Design. 505’s partners John Ward and Nick Igel attended the breakfast in addition to Harry Worsham, an ENVD alum who recently joined 505, as well as Lynn Williams who is a principal and serves as the interior design discipline lead. Following the breakfast, the award recipients participated in instructing students for studio desk crits in ENVD Instructors Azhar Khan and Jeremy Ehly’s architecture studios.

ENVD is proud to celebrate it’s design community by recognizing individuals who have demonstrated leadership and made significant contributions to the design and architectural professions and their communities. 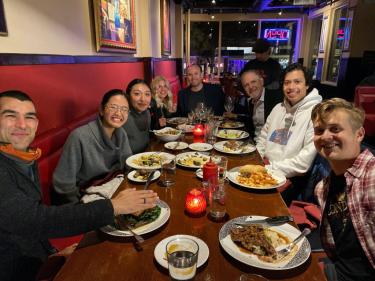