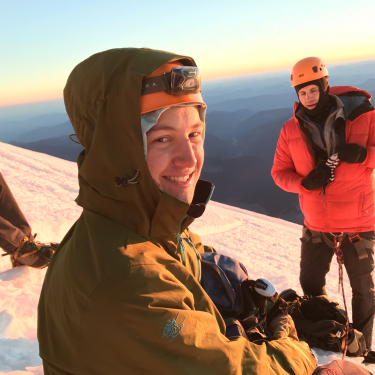 What inspired you to come to ENVD?
I originally came to CU as an engineering major but quickly realized that I really only enjoyed my design based classes so when I decided that I wanted to switch majors I took a look at five different programs that CU offered and after only visiting ENVD I knew that it was everything I wanted. I think that the creativity of the program, as well as smaller class sizes and the social aspects of our studio spaces, were what ultimately made my decision.

What do you think you will miss the most from your time at ENVD?
I think that the collaborative and fun work environment that has been built over the last four years is going to be what I end up missing the most. The people that I have met along the way (students and professors) have all been amazing and I will miss them greatly. I think we are all so lucky to have studied in a small program like ENVD as it really helped us build such strong camaraderie with our peers that seem to be unique to ENVD in this university.

Favorite memory?
While I have many memories that I will fondly remember ranging from certain classes to late-night work shenanigans, I think my favorite memories stem from the Rome Seminar led by Professor Holbert last summer. Although there were so many amazing parts of that summer semester, I think my favorite memories from it had to be the two-weekend trips that we took. Our weekend in Milan and staying in an agriturismo in the Tuscan countryside are two memories I wouldn’t trade for anything else.

What are your plans beyond graduation?
I hope to gain some experience in the Architecture field over the next year or so before returning to school to pursue my Masters.