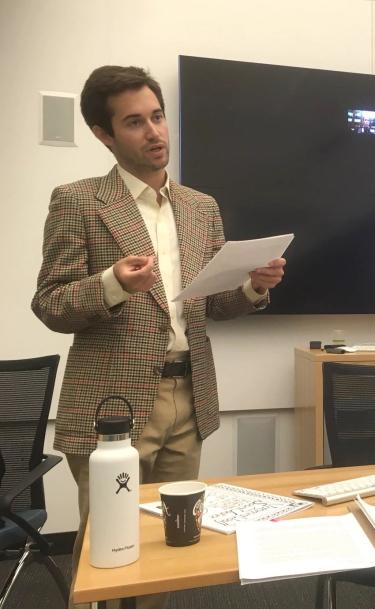 Michael Schrimper is a second-year Ph.D. student specializing in Anglophone literature of the late nineteenth and early twentieth centuries, political theory, and literature’s interpenetration with visual art. He holds a B.A. in English from Indiana University Bloomington and an M.F.A. in fiction from Emerson College, Boston, where he later served on the Writing, Literature & Publishing faculty and was a reader for Ploughshares. His scholarly articles appear in Journal of Modern Literature, The Concord Saunterer: A Journal of Thoreau Studies, and the Virginia Woolf Miscellany, among others. His creative writing appears in minnesota review, The Worcester Review, Chicago Quarterly Review, Willow Springs, and others. Schrimper divides his time between Boulder and Santa Cruz, California, and is a National Endowment for the Humanities Summer Scholar and a Pushcart Prize nominee.